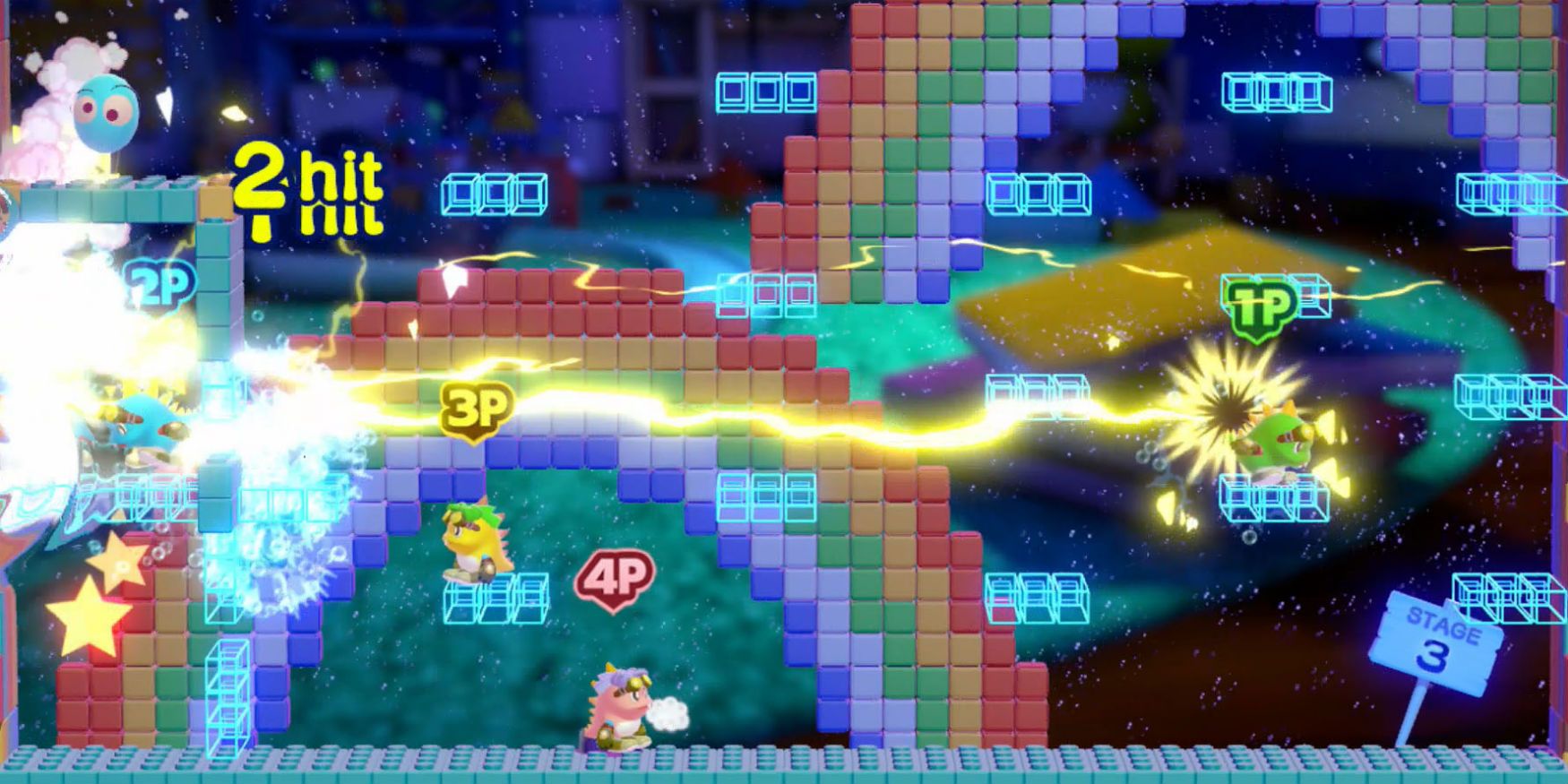 Looking at the state of the video game industry today, you’d be forgiven for thinking that the age of the arcade game is long since past. The market is dominated by big names, huge technical achievements and deep narratives. Even the indie games that gain traction do so because they leave a deep impact on the industry, either because they find new, unique methods of storytelling, push the boundaries of what their genres could do, or just achieve a high level of excellence in game design. In a world with so many visionary titles, it’d be easy to forget where the industry started. But video games wouldn’t be where they are now–in fact, they likely wouldn’t be anywhere at all–without the arcades. Bubble Bobble 4 Friends brings players back to these humble roots in an attempt to reinvigorate the quietly enduring legacy of the old arcade classic.

Bubble Bobble 4 Friends is every bit a Bubble Bobble game. If you’ve interacted with the franchise before in any capacity you know what to expect now. Players control cute little dragons who can blow bubbles which they use to trap enemies. Popping a bubble destroys the enemy inside, and when there’s no one left to oppose you, you move on, navigating boxed-in, single-screen platforming levels all the way. As the name suggests, Bubble Bobble 4 Friends supports four player co-op, and it also comes complete with a port of the original arcade game from 1986. This only supports two players, however.

Bubble Bobble 4 Friends boasts 100 levels; these are split into groups of ten. It would be disingenuous to call these groups “worlds” or anything similar, because the scope of the game is quite limited. The game takes place entirely in a child’s bedroom in the middle of the night; each “world” is a different area of the bedroom, like a bookshelf or a doll castle. This means that the settings for the levels are so indistinct as to be virtually indistinguishable; the only defining characteristics of each level are the border around it and the background, which is always going to be the same child’s bedroom. Furthermore, since it’s nighttime, the bedroom tableau in the background is darkened; fortunately the gameplay in the foreground avoids a similar fate. As flaws go, having a dark background is a very minor one, but something a little more interesting than a dark room might have been nice.

As far as gameplay goes, it’s perfectly inoffensive. Bubble Bobble 4 Friends iterates on the classic Bubble Bobble formula by letting players ride on their bubbles. This goes hand in hand with the other notable new mechanic, air currents. Every level is filled with air currents that blow in a variety of different directions, as indicated by small moving particles in the background. This is another reason that the darkened background isn’t too bad; it behooves the player to be aware of how the wind is blowing, especially if they need to ride their bubbles somewhere that’s hard to reach. Riding bubbles works fine for the most part, but it can be a bit awkward to control, as you bounce around for as long as you’re standing on one. There are some decent platforming challenges set up around these air currents, but it feels like they could’ve been explored just a bit further.

A bubble will be affected by the current as soon as it is formed, even if there’s an enemy inside of it. This means that even if you bubble an enemy, you might not be able to reach and pop the bubble before they’re blown away. This doesn’t come up as often as it might, though, because the range of your bubble blowing feels frightfully short, especially when compared to the arcade game which you can switch over to at almost any time. The range isn’t often a hindrance until the later levels, but it can be quite the issue when it comes to boss battles.

Bosses appear at the end of each “world,” and they each share a consistent design philosophy; an orb with two limbs and a face, wrapped in a sort of cape. These designs are unimpressive and samey, but the fights themselves are pretty distinct, ranging from fairly easy to decently challenging to startlingly brutal. At the end of “world” five the players fight the main antagonist, a wizard named Bonner. Once Bonner is defeated the player unlocks Hard Mode, where they find the other half of the game. The “worlds” are the same in hard mode but the level layouts are different and populated with more aggressive enemies. Furthermore, when you defeat a boss, you unlock a special ability that relates, at least tangentially, to the boss you just defeated. These powers can be boons like special bubbles that unleash bursts of lightning when struck, or the ability to temporarily halt all air currents. Each power has only a certain number of uses, which can be replenished by collecting fruit that is dropped by defeated enemies. If you collect every letter scattered throughout the “world” of the boss, you can form the word “EXTEND” which upgrades that world’s special ability by giving it more maximum uses.

Bubble Bobble 4 Friends is not a long game or a hard one. When you run out of lives you’re given the opportunity to pick up at the beginning of the stage on which you died, meaning that unless you care deeply about your points total it’s really just a matter of patience. You can play all the way through normal mode in one sitting, and since hard mode is the same amount of content it can be beaten in the same amount of time, assuming you can put up with the increase in difficulty. The boss fights are really the only things that’ll give you any meaningful challenge, and even then they’re pretty hit or miss. It’s entirely conceivable that a skilled enough player could see everything there is to see in well under five hours.

Next: Retro Gaming Subscription – How to Stream Thousands of Popular Arcade Games

Bubble Bobble 4 Friends releases March 31, 2020 for the Nintendo Switch. A digital download code was provided to Screen Rant for purposes of review.

​The Blacklist Recap: An Old Flame Puts Red at the Center of a Murder Mystery
REZZ Working On Collab with SVDDEN DEATH for His VOYD Project
Why Star Wars Fans Shouldn’t Expect Any Deleted Action Scenes In The Rise Of Skywalker
Gibby on ‘iCarly’ ‘Memba Him?!
‘Bad Boys For Life’ Drives Into Homes Early