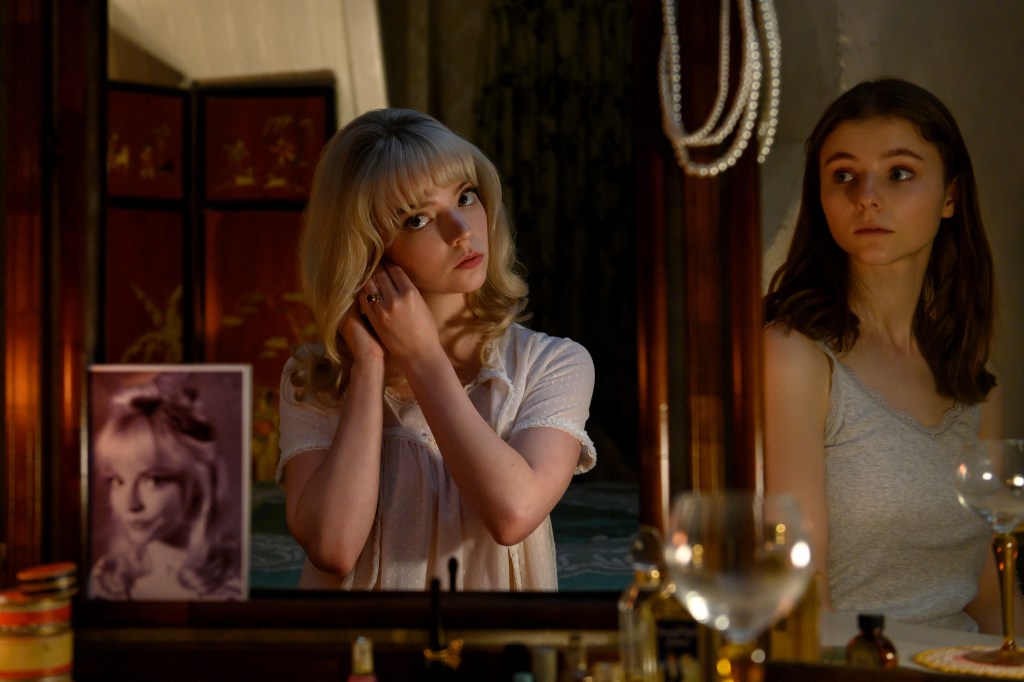 Focus Features presents Edgar Wright’s Last Night In Soho, a twisty psycho-thriller with a great soundtrack, as Wes Anderson’s The French Dispatch goes wider, testing the appeal of a director whose films have been called the arthouse equivalent of Marvel.

Last Night, a time-bending genre tale, unspools on just over 3,000 screens, not exactly specialty but from a writer-director who “can dip his toe into anything, a true specialty film, a more commercial film like Baby Driver, and now a psychological thriller that harkens back to Hitchcock, Brian De Palma and David Lynch,” said Focus distribution president Lisa Bunnell. It’s “more than a typical commercial slasher movie. It takes the thriller genre to a new level.”

The film premiered this fall at the Venice Film Festival and TIFF where it resonated strongly with preview and festival audiences. Deadline’s review “called it a dark and delicious trip.” It has a 95% audience score on Rotten Tomatoes and stars Anya Taylor-Joy and Thomasin McKenzie — with an ensemble including Matt Smith, Terence Stamp and the late Dame Diana Rigg. Producers are  Nira Park, Tim Bevan, Eric Fellner, Laura Richardson and Wright.

McKenzie plays Eloise, an aspiring fashion designer mysteriously able to enter the 1960s where she encounters a dazzling wannabe singer, Sandie (Taylor Joy). But the glamour is not all it appears to be and dreams of the past start to crack and splinter into something far darker.

Taylor-Joy’s debut music video of her rendition of the classic 60s hit Downtown, originally made famous in the 1960s by Petula Clark but slowed for the film’s eerie themes, is at 15 million views. The film features iconic 1960s voices from Dusty Springfield’s Wishin’ and Hopin’, Cilla Black’s You’re My World, The Kinks’ Starstruck and Barry Ryan’s Eloise. Focus released a limited edition 7-inch vinyl of the Downtown single.

Wright is presenting a series of his favorite classic films for Alamo Drafthouse and been appearing at theaters ahead of the Last Night opening. Yesterday he took over the @Twittermovies handle, which has 6.8 million followers. “Edgar is very dedicated to the theatrical experience. He understands that is the best way to go see a film. This is really one of those movies you need to see in a theater,” said Bunnell.

The marketing push for Last Night includes an exclusive Snap Lens created for fans to use on social and a television campaign across broadcast and cable including the NFL, The Bachelorette, The Walking Dead and American Horror Story, along with local and national radio

The film was the first, inaugural red-carpet premiere at the new Academy Museum this past Monday.

The specialty audience, which is heavy on older demos, has been slower to return to theaters “There will always be a place for arthouse and specialty film, but all of us have to learn to adapt and it’s a learning process,” said Bunnell. “In my opinion there is too much of an emphasis on ‘Is it back?’

‘Is it back?,’ however, is just what the industry has been wondering since last weekend after The French Dispatch jolted the glum arthouse market in 42 locations with a $26K per screen average — a record since Covid. It rolls out to 788 theaters and over 60 markets this weekend ahead of a further expansion to over 1,200 theaters on Nov. 5.

Based on the short story The Quiet Boy by Nick Antosca, the film is produced by horro maestro Guillermo del Toro, David S. Goyer, and J. Miles Dale.

A24 opens Joanna Hogg’s The Souvenir Part II starring Honor Swinton Byrne, Tilda Swinton and Richard Ayoade in two theaters ahead of an expansion next week (locations to be determined). It’s a rare arthouse sequel, one that follows from 2019’s The Souvenir, a semi-autobiographical account of Hogg’s experiences at film school.

In the aftermath of her tumultuous relationship with a charismatic and manipulative older man, Julie (Honor Swinton Byrne) begins to untangle her fraught love for him in making her graduation film, sorting fact from his elaborately constructed fiction. It’s a portrait of the artist and a story of first love and a young woman’s formative years.

The film was a selection at the Cannes Directors’ Fortnight (Deadline review here) and the New York Film Festival.

Elsewhere in specialty: Netflix is opening Passing. Written and directed by Rebecca Hall, it just garnered a pile of nominations for the Gotham Awards including Best Picture. Based on the novel by Nella Larsen, the movie follows two black women (Tessa Thompson, Ruth Negga) who can pass as white and choose to live on opposite sides of the color line in 1929 New York. Deadline review here.

Passing opens in about 20 theaters in North American and 100 worldwide and Netflix plans to add runs next week. It hits the streamer on Nov, 19.

Animated epic fantasy The Spine of Night with Richard E. Grant, Lucy Lawless, Patton Oswalt, Betty Gabriel and Joe Manganiello. From RJLE Films, written and directed by Philip Gelatt and Morgan Galen King. An ambitious young man steals forbidden knowledge from a sacred plant, falls to its darker temptations and unleashes ages of suffering onto mankind. As his power grows, those who stand against him are a daring tomb-robber, star-crossed lovers, a maniacal necromancer and winged assassins.

Relativity Media’s drama Violet, from SXSW and TIFF from first time feature writer-director Justine Bateman. With Olivia Munn, Luke Bracey and Justin Theroux. Munn plays Violet Calder, who realizes that she no longer can ignore the daily barrage of self-criticisms (voiced by Theroux) that clouds her life. Unsure how to live a life free from that self-doubt, like her childhood friend Red (Bracey), Violet realizes she has no choice but to travel the road that is more frightening to her than the fear that holds her back.