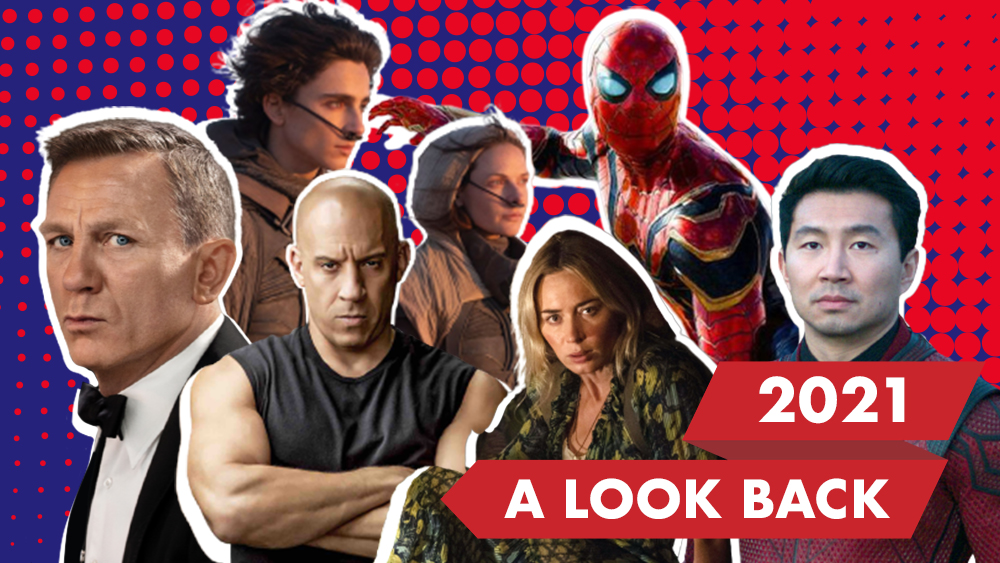 “Are you really doing a domestic box office marketshare piece?”

Such is the whine from several studio insiders and corp comms folk.

Of course, we are. Why wouldn’t we? In the best and worst of times, in the published horserace of box office dollars, we still need to know where the studios stand when all the dust settles, even if the pandemic kept business at bay with $4.55 billion for 2021 in U.S. and Canada, below the expected $5.2 billion.

What continues to frustrate many major studio theatrical executives in this annual exercise is how the Disney-Fox merger continues to tip the scales in both a global and domestic box office race.

Disney is clearly counting all of their labels–Disney, 20th Century Studios and Searchlight, and proclaiming themselves the winner with $1.17 billion in the U.S./Canada (+180% over 2020) and $2.9 billion global. Stateside that translates into 27% of the $4.55 billion 2021 domestic B.O. year, and the town will just have to deal with that.

Disney’s 20th Century titles —Free Guy, The King’s Man, West Side Story– are handled by the same marketing and distribution team as the big Disney titles, i.e. Shang-Chi and the Legend of the Ten Rings. However, Searchlight, a tad similar to the autonomy that Disney-owned Miramax had back in the day, operates its own marketing and distribution on its theatrical releases. It’s very difficult to exclude 20th Century Studios ticket sales from Disney’s haul, because, c’mon, after Avatar 2 and Black Panther: Wakanda Forever, those titles will truly beef up the Burbank, CA lot’s 2022 film revenues.

However, if we’re going to be purist and weigh domestic box office marketshare by singular studios, ala before the 2019 merger, and go by the way they’re listed in Comscore, then Sony can arguably won 2021 with $1.059 billion domestic, 54% of that driven by Spider-Man: No Way Home, and also bolstered by Venom: Let There Be Carnage ($212.6M) and Ghostbusters: Afterlife ($122.3M). Sony’s monies account for 23% of the 2021 domestic B.O. That hand beats Disney’s $921.2M driven by Shang-Chi, Black Widow, Eternals and Jungle Cruise.

20th Century Studios + Searchlight combined made $245M, repping 5% of the annual domestic B.O., half of that total from Shawn Levy’s Free Guy, the highest grossing original movie of the year.

Sony deserves a big pat on the back here: They earned their bread off a pure theatrical window, not a day-and-date hybrid like Disney which debuted movies at the same time on Disney+. Perhaps if Disney stuck to theatrical, and didn’t siphon off box office grosses with Raya and the Last Dragon, Cruella, Jungle Cruise and Black Widow, they’d be looking at a dramatically bigger number from their own branded movies right now. In 2019, Disney, 20th and Searchlight did $4.25 billion.

In a pure studio label race, Sony can boast that it’s won the No. 1 domestic box office titles two years in a row, +118% from 2020 (they settled at $485.5M in mid-March 2020 before movie theaters closed). At the same time, while they boast pro-theatrical, they did sell the second-most number of titles to streamers between March 2020 and August 2021 at 9, behind Paramount which unloaded 10 over that period. If older adult audiences continue to be a stone in some big studios’ shoes, natch, expect more of these types of films to transition to streaming services.

Sony’s recent push of Marvel property Morbius from Jan. 28 to April 1 has less to do with Omicron, I hear, which many experts expect will peak by mid-January, and more to do with holding Spider-Man: No Way Home on Imax and PLF screens, the movie making $56M recently in its third weekend. My sources don’t believe U.S. theaters will be shutting down in the way that Canada has paused theirs in Quebec and Ontario due to Omicron given the country’s different set of politics and public healthcare system.

But there’s a more intriguing takeaway from the Morbius move for Sony: They go from the momentum of Spider-Man to Tom Holland’s next big movie, Uncharted, as the studio’s first wide release of 2022 on Feb. 18.

While there’s no question that Disney will look to Searchlight as their Oscar-bait theatrical label, the lingering question is what does 20th Century Studios mean to the Burbank, CA lot outside of Avatar? What do they want from this studio label? What does it mean to them? Is it just a library they can plunge and exploit chiefly on Disney+ and Hulu through series and direct-to-OTT movies like Home Sweet Home Alone? Once Avatar runs its course, is it curtains for 20th Century Studios on the big screen? It wouldn’t be shocking in weeks to come if Disney CEO Bob Chapek claims the domestic box office isn’t working for movies like West Side Story ($30M) and The King’s Man ($20M), however, it’s crystal clear that Disney really messed up in the dating of those two films: Why did a musical aimed at adults opening before that audience is even available, go before Christmas? And as far as King’s Man, um, hello, there’s a lot of open spots in the 2022 calendar to have bowed that one outside of Spider-Man‘s shadow.

The Armie Hammer scandal isn’t likely to impact Death on the Nile‘s domestic box office grosses. Average moviegoers seriously don’t care. The bigger question is whether older adults are ready to come out and make a date for this movie over Valentine’s Day, the Kenneth Branagh movie opening on Feb. 11. In any pre-pandemic year, the dating is logical, but in times like these, a gamble. The next 20th Century Studios’ titles schedule for 2022 are Bob’s Burgers on May 27, an untitled movie on Sept. 27, the David O. Russell-directed untitled movie on Nov. 4, Avatar 2 on Dec. 16 and an untitled movie on Dec. 23.

While Death on the Nile is Disney’s first release of the calendar year, for the core studio’s it’s technically Pixar’s Turning Red on March 11, with more rocket engine fuel from Marvel’s Doctor Strange in the Multiverse of Madness on May 6.

Universal and Focus combined saw $714.2M (+66%) — $657.6M of that coming from the big label and $56.5M from Focus Features which remains committed to theatrical releases, unlike other handlers of specialty films, but on a 17-day window. Despite experimenting with Peacock on Halloween Kills and Boss Baby 2, the studio does remain committed to theatrical for the most part, knowing how the big cinematic launches drive the engines of everything else at the company down to parks. In other words, they haven’t made The Office theme park ride yet. It’s too small screen. That said, they need to drive paid subscribers to Peacock, and are curating which theatrical-day-and-dates slowly, i.e. Jennifer Lopez’s Marry Me on Feb. 11. They saved their big pic F9 for this year, by and far their biggest grossing title repping 24% of their box office, and they even pushed Illumination’s Minions: The Rise of Gru, which was suppose to open in 2020 before the pandemic to this year, on July 1, along with Jurassic World: Dominion on June 10.

Separately, Focus’ best efforts last year were Stillwater ($14.4M), Last Night in Soho ($10.1M) and Belfast ($6.9M), the latter which has many buzzing as the leading Oscar contender. The label will continue to nudge adults toward the big screen with Downton Abbey: A New Era on March 18 unless they decide there’s a more optimistic release date in 2022.

Warner Bros. cashes in $662.6M, +181% from 2020 Covid box office levels. The studio will argue that they’ve been supplying films to theaters since they began reopening in August 2020, despite their theatrical day-and-date plan which clearly eroded ticket sales by providing theatrical titles in the home, free to HBO Max subscribers. We drilled down on how this plan went sideways yesterday. Anyway, they’re back to a theatrical window and beginning with The Batman on March 4, may have the first $100M+ opening of 2022. With such big movies like Black Adam, Fantastic Beasts: The Secrets of Dumbledore, Baz Luhrmann’s Elvis, Salem’s Lot, The Flash and Aquaman and the Lost Kingdom, can a resurge to $2B stateside be in the cards? I say, yes.

United Artists Releasing/MGM, the biggest hope out there for returning adults to the big screen, and the one specialty label that’s betting big on it, saw $323.1M, half of that from the final Daniel Craig 007 movie No Time to Die. While a mass-appealing blockbuster, it’s that type of movie which is looked to have spurred any hesitant older audiences out there to go the movies. UAR can also boast about House of Gucci. Love it or hate it, it’s the best adult-driven drama during the pandemic with just under $50M. Who knew House of Gucci would beat West Side Story at the domestic box office? UAR also moved arthouse audiences with the limited release of Paul Thomas Anderson’s love letter to the 1970s, Licorice Pizza (currently $6.6M). Big pics to look forward to are Sylvester Stallone’s Samaritan on Aug. 26, and Creed III on Nov. 25. Again, the bigger question beyond these movies: Will the Amazon acquisition of MGM go through? Them, will Amazon grow up and allow MGM to practice what they do best: theatrical releases?

Paramount saw $278.1M, 58% of that from A Quiet Place Part II, which they nobly held for a theatrical window throughout the pandemic before firing up summer with a $57M 4-day opening over Memorial Day. Business got spotty with Snake Eyes: G.I. Origins because not many G.I. Joe fans we’re waiting for it. Top Gun: Maverick found itself in a sandwich around July 4th between Universal’s F9 and Disney’s Black Widow. Paramount moved it to November, but then decided the best global marketplace for the film exists this year. The studio took kids’ movies Paw Patrol and Clifford the Big Red Dog theatrical day-and-date on Paramount+ to middling results.

There’s a lot of big movies on the calendar this year for the Melrose Ave. lot starting with Spyglass’ Scream over MLK weekend, the Sandra Bullock-Brad Pitt-Channing Tatum adventure movie The Lost City on March 25, Sonic the Hedgehog 2 on April 8 and Mission: Impossible 7 on Sept. 30. However, the studio with its new administration needs to figure out what they want to be. Is it a robust theatrical studio? A studio of day-and-date Paramount+ titles? A studio under a bigger sales target, that being ViacomCBS, to be taken over by another entertainment conglom in the future?

Lastly among studios who cleared $100M at the domestic box office is Lionsgate with $102.7M. Please, dear baby Jesus, deliver the Hunger Games prequel ASAP as this studio desperately needs a hit. The fact that the studio has been rumored to be taken over by a bigger corporate beast is the worst kept secret since Woody Allen played jazz at Michael’s Club in NYC. But who? The studio on its theatrical side did not wow at all with with zero big screen breakouts. Ryan Reynolds and Samuel L. Jackson’s Hitman’s Wife’s Bodyguard was the highest grossing movie stateside with $38M. That’s 50% less than the first 2017 action comedy, The Hitman’s Bodyguard and 69% less than Reynolds’ Free Guy which did over $121M. Perhaps there’s a red-state sleeper somewhere in American Underdog, but really, how much are we talking here? $30M? There’s some interesting offerings in 2022 like Roland Emmerich’s Moonfall on Feb. 4, which has the benefit now of not playing in the wake of Morbius, Nicolas Cage satire The Unbearable Weight of Massive Talent, Jennifer Lopez’s Shotgun Wedding and White Bird: A Wonder Story. But Lionsgate, we ask, will you invest in the P&A to open these movies? Theatrical is back, and some of these movies aren’t strictly for seniors.