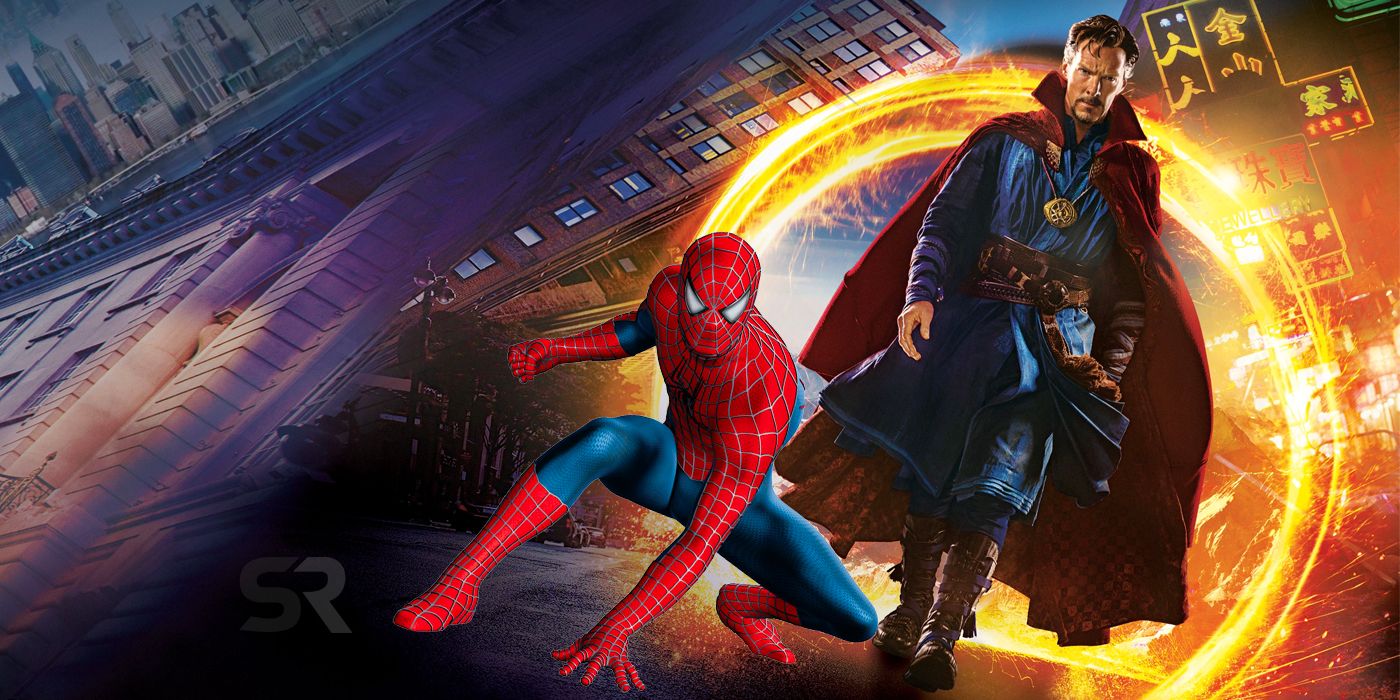 A new piece of fan art for Doctor Strange in the Multiverse of Madness imagines Sam Raimi’s Spider-Man being introduced to the Marvel Cinematic Universe. Raimi has been attached to dozens of movies over the years, but he is mostly known for two of his franchises: Evil Dead and Spider-Man. Raimi directed three Spider-Man movies between 2002 and 2007, all three of which starred Tobey Maguire as Peter Parker.

Ever since the success of Spider-Man: Into the Spider-Verse, fans have been talking about a live-action Spider-Verse starring Maguire, Andrew Garfield, and Tom Holland. Marvel has yet to confirm or deny the project, but the first trailer for Morbius teased the possibility of Maguire’s Spider-Man being introduced. The film not only confirmed a connection to the MCU by showing Michael Keaton’s Vulture, but also showed a piece of graffiti showing Maguire’s Spider-Man. Fans went crazy with the possibility of Raimi’s character joining the MCU, which is exactly what this fan art imagines.

New fan artwork from bosslogic, shows a teaser poster for Doctor Strange in the Multiverse of Madness. The poster shows a portal opening up and Spider-Man’s arm shooting a web, which is of course the iconic suit from the original Spider-Man trilogy. Bosslogic‘s artwork and Instagram post can be seen below:

Word just broke yesterday that Raimi was in talks to direct Doctor Strange in the Multiverse of Madness. Disney is currently searching for someone to direct the Doctor Strange sequel after the first film’s director, Scott Derrickson, departed the project. As with most cases of a director leaving a film, the reason for Derrickson leaving Doctor Strange in the Multiverse of Madness was summed up to “creative differences.” The film was originally called the MCU’s first horror movie, which Kevin Feige later clarified, saying the film would only have “scary sequences.”

Needless to say, if Raimi took over the project, many fans’ worries would be put to rest. Having a horror movie in the MCU would be a fresh addition to the superhero genre, and including Raimi’s Spider-Man would be the icing on the cake. Including Maguire and Garfield in a future MCU movie would not only make fans go crazy, but it would also be a good way to connect Sony’s villain universe with the MCU, which they already seem to be doing. At this point though, having Maguire’s Spider-Man in Doctor Strange in the Multiverse of Madness is just wishful thinking.

Mad Max 5 Movie Rumored To Be In The Works, Start Filming This Fall
Related Topics
advertising