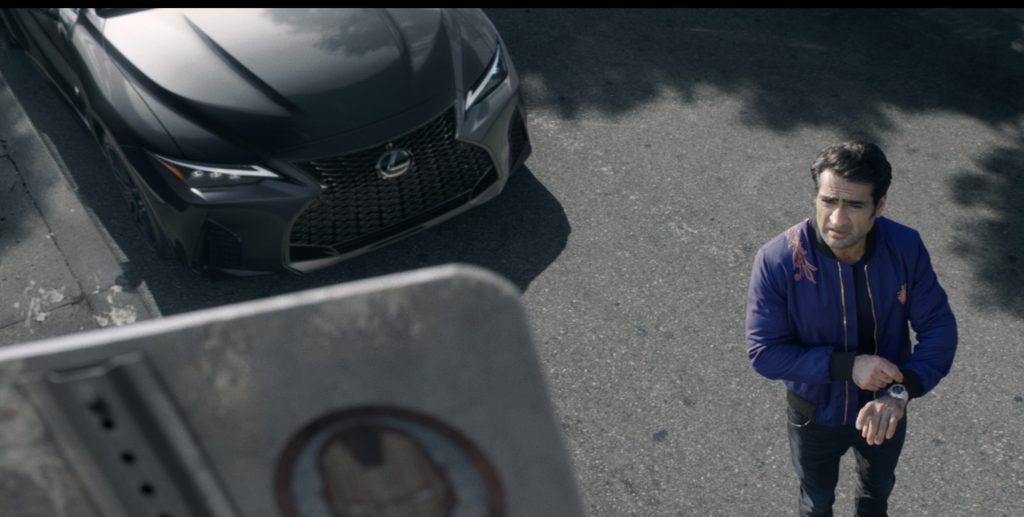 Among film distribution executives in town, there’s a saying about Disney’s theatrical releases, in particular their Marvel titles: That they’re “five quad” movies.

What does that mean? Essentially, the Marvel Cinematic Universe titles are known to overindex and perform well beyond the norms of a regular four quadrant demographic tentpole which is aimed at male and females, over and under 25.

All the more reason with an IP such as Eternals, which is poised to appeal to a diverse range of moviegoers with a projected global opening weekend of $150M, that Disney reaches all points of the galaxy with their promotional partner campaign. In the case of Eternals, Disney has secured $100M in global marketing support from bespoke brands, higher than that of Black Widow and Shang-Chi and the Legend of the Ten Rings, and also pre-pandemic MCU titles like 2017’s Guardians of the Galaxy 2‘s which brought in $80M worth of advertiser support. The biggest brand blitz ever racked up by a Marvel movie belongs to Sony’s Spider-Man: Far From Home which touted $288M in 2019 media value.

“As Stan Lee said, ‘Marvel has always been and always will be a reflection of the world right outside our window.’,” says Disney SVP of Partnership Marketing Mindy Hamilton, “I know that’s something our filmmakers do, and it’s also something we do from a strategic standpoint on partnerships. We want to appeal to all audiences, including multi-cultural fans.”

Already, iSpot estimates that Eternals $15.5M TV spend campaign has had a reach of 1.21 billion impressions, besting the ad spend and reach of Shang-Chi and the Legend of the Ten Rings, respectively $10.9M and 1.18 billion, and the 1 billion audience impressions drawn by Black Widow. Eternals footprint on social media according to RelishMix counts 461.6M across YouTube views, Facebook, Instagram and Twitter, 46% ahead of digital averages and those for a superhero movie.

At the top of Disney’s promotional partner cake is Lexus, who for the second time is teaming with Marvel after 2018’s Black Panther as the studio’s exclusive automotive partner. In early October, Lexus debuted the marketing campaign “Parking Spot”, a 2: 36 length spot, directed by Avengers filmmakers Joe and Anthony Russo and starring Eternals Kumail Nanjiani who plays the god Kingo in the film. In it, Kingo drives the Lexus IS 500 F Sport Performance which is armed with a 472 horsepower V8 engine, and tries to find a parking spot as the city is crumbling around him. The vehicle retails at $56,5K.

“Lexus is very clear on the power that Marvel partnership can deliver for the brand,” says Hamilton.

“What brands get with a Marvel partnership is fan engagement. That leads to brand love, and it leads to sales. It’s the custom storytelling or ‘story living’. With our partnerships, they know we have a commitment to tell the brand story through a Marvel Studios lens,” adds the Disney SVP.

A 30-second version of the spot aired on cable during college football, NHL and soccer. In addition to broadcast, the campaign includes advanced TV, digital and social ad components. In addition, Lexus curated a set of ten wrapped vehicles inspired by each of the ten Eternals characters. The cars were featured in a procession down Hollywood Blvd where Lexus was an official World Premiere and live stream sponsor on Oct. 18. Program extensions included Lexus’ title sponsorship of the Esports Awards and activation with clothes online shopping site 100 Thieves.

A longtime MCU sponsor returning for Eternals is Geico with a TV digital campaign featuring the famed Gecko imagining himself as one of the superhero gods. The two brands are like hand to glove, particularly in their shared sense of humor.

Who’s the target here when it comes to insurance and Marvel? It’s that prime moviegoing demographic of 18-34, who have vibrantly returned to movie theaters to see event films. Ditto when it comes to the appeal for banker Synchrony, another returning partner who aims their online banking at young millennial Marvel fans; their custom digital campaign being “Save Like a Hero”.  In previous Marvel team-ups, Synchrony has highlighted their Marvel credit card. They were also the Eternals world premiere sponsor with an interactive photo booth on the “blue carpet”.

When motion picture executives talked about movies’ eventual return to theaters as the pandemic eased, they knew they couldn’t do it without crossing promoting with sporting events whether they were live or televised. And while Disney has run TV spots for Eternals during NFL (11.8%), MLB (6.6%) and college football (2.1%) according to iSpot, they squarely made the L.A. Rams a Marvel team player.  It’s not the first time that Disney has linked up with pro-sports, having joined with the WNBA to push Captain Marvel.

For the Eternals, NFL celebrates the intersection of heroes and athletes. On Oct. 24, the MCU movie took over the gameday theme for the Rams’ home game against the Detroit Lions, a major rivalry game since each team’s quarterback had previously played with the other team. There was a mixed Eternals trailer and L.A. Rams fan spirit cross promotion with stars Nanjiani and Lia McHugh participating on game day.

Says Hamilton, “Sports is geared toward an amazing cross-section of folks. Not only from a diversity perspective, but just from an age range, whether it’s families, adults without kids, Gen Z, it’s a beautiful cross-section, so we always make sure that we’re doing something in that space, and in this case, it was the L.A. Rams, Hollywood’s team.”

While the MCU has long been known as the ultimate fanboy destination, never underestimate the power of women in their love for the films.

“Long gone are the days that it’s just only males. It is very much females too…it’s all audiences,” says Hamilton about the MCU’s demos, and as such their bespoke partners include McDonald’s and Ziploc, which target moms, and cosmetics co. Urban Decay, aimed women.

McDonald’s is a Walt Disney Company Corporate Alliance partner and has continually been part of previous Marvel promo campaigns. Eternals is emblazoned on Happy Meals in the U.S. and Latin America, and there’s a line of ten toys. There was a next level digital experience with the Eternals toys through the Happy Meal app, including McHugh’s voice. McDonald’s also had an interactive Times Square billboard.

It’s Ziploc’s fourth time around with Disney and they ran a national TV and digital spot around their leakproof containers.

“We want to make sure that we’re always talking to moms. Ziploc gets passed along in a lunch and puts a smile on the kids’ faces when they pop the lunch box open,” says Hamilton. Kids under 12 who came out last night stateside already love Eternals with a 90% positive score according to Comscore/Screen Engine PostTrak exits with a 65% definite recommend. The movie as we already told you has made $9.5M in previews, the third best result of the pandemic. Dads outweighed moms in turnout, 56% to 44%, however, the latter enjoyed the movie better. Boys under 12 dominated yesterday, repping 61% of their demographic while girls showed up at 39%.

Urban Decay reps the first time that Marvel has worked with a brand that has developed a custom collection of product inspired by the film available at Sephora, Ulta, Macy’s. Previously Disney has teamed with cosmetics lines Sally Hansen nail polish and MAC on Cruella, the latter also a promo partner on Maleficent and Aladdin. Macy’s Digital retail event in three time zones had make-up artists creating looks inspired by the Eternals heroes. The Macy’s Herald Square flagship also featured a co-branded digital video how-to piece on the Jumbo Tron in Times Square. There was a digital campaign across YouTube, Instagram, Twitch and TikTok. Urban Decay also hosted a masterclasses online in recent weeks showing consumers how to use the Eternals inspired product from their collection vault.

Further propelling word of mouth on Eternals is the film’s diverse cast. In the pic’s social media reach per RelishMix, 26% is being driven by actress Salma Hayek and her online support toward her 22.5M followers. There’s also Nanjiani’s 4M followers and Richard Madden’s 3.4M, and Gemma Chan’s 1.7M followers between Twitter and Instagram. Asian audiences in early Comscore/PostTrak exits are giving Eternals its best grades at 85% from Thursday night previews, repping 12% of the audience. Caucasians repped 45% of last night’s crowd, Hispanic and Latinos 23% and African Americans 15%.

“Marvel performs well with multi-cultural audiences, and our partnerships complement this,” says Hamilton, “It has always been a priority and will continue to be.”