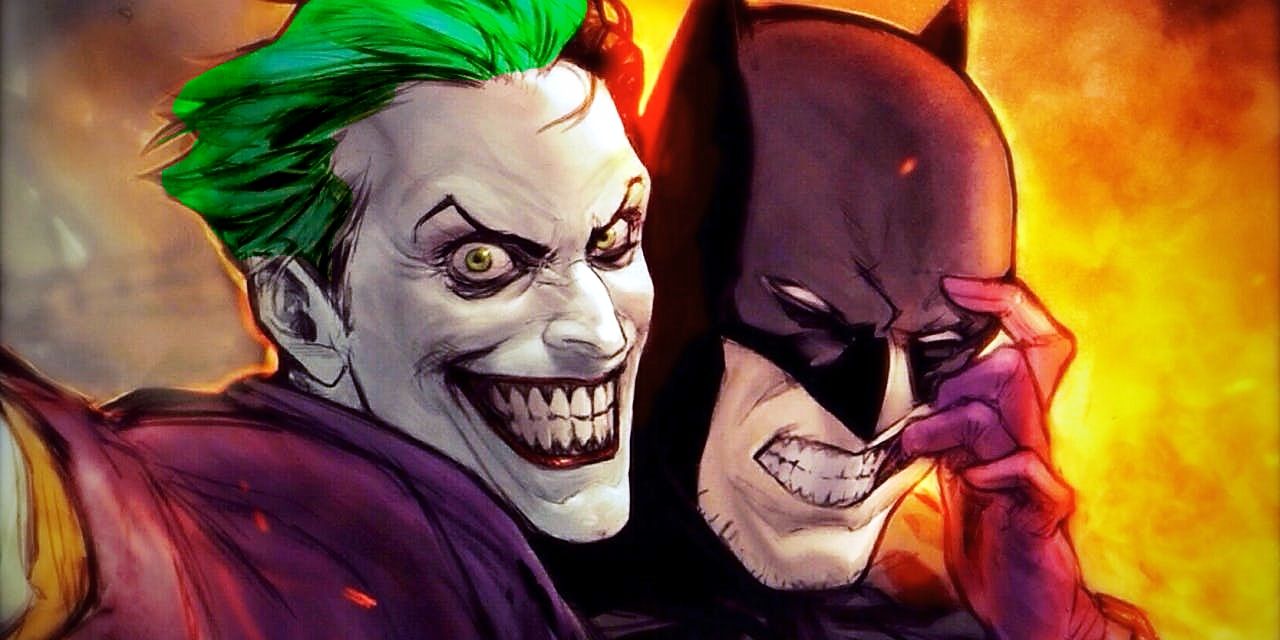 When it comes to literary foes, few have a dynamic as unique as the Joker and Batman. To label their relationship a mere hero-versus-villain rivalry is to completely ignore the complex history the two characters share. The Clown Prince of Crime and the Dark Knight have been matching wits since the 1940s, and in that time they developed a bond unlike any other pair of fictional arch-enemies – with the Joker confessing his love for bats on multiple occasions.

Contrary to most other super villains, the Joker doesn’t actually hate his foe. In fact, on most occasions, his shocking acts of mass violence are nothing more than elaborate stunts to win the undivided attention of his costumed nemesis. He doesn’t commit evil deeds in spite of his heroic rival, he commits evil deeds FOR his heroic rival. To the Joker, the world is a violent video game, and Batman is his player two.

While the Caped Crusader has repeatedly denied feeling anything towards the Joker other than unquenchable rage, the villain has on multiple occasions professed his love for Batman. Throughout their 80 year history, the Joker has shown romantic affections for the Dark Knight in some of the darkest (and funniest) ways. From comics to video games, here is a list of times the Joker confessed he’s in love with Batman.

The DC Universe’s latest streaming series is an R-rated romp starring the Joker’s former partner/girlfriend as she navigates Gotham’s underworld as a solo act. The pilot episode shines a spotlight on the toxic relationship between the two criminal clowns and ends with Harley breaking things off with the Joker.

What was the final straw? When the Riddler forces the Joker to decide between saving Harley or saving Batman (who were both dangling above an acid deathtrap), the Joker chooses to save his arch-nemesis without any kind of hesitation. This causes Harley to recall an earlier memory of her and the Joker, where he fiendishly purred on a rooftop “Till death do us part.” It was only after realizing how little she meant to him that Harley finally understands the Joker was actually talking to Batman in that moment.

Taking place outside DC’s main comic book continuity, Sean Murphy’s “White Knight universe” is another R-rated take on the Joker and Batman’s odd relationship. In the story’s opening issue, Batman chases his arch-enemy through Gotham until finally catching him in a pharmaceutical warehouse.

It is there that the Joker declares (between punches to his face) that he’s actually Batman’s biggest fan, adding that he views their relationship in romantic terms. Though Batman denies it, Joker claims they are Gotham’s biggest power couple and that his crime sprees are just an excuse for them to spend time together. “We’re a team, Bats. Admit it!” the Joker exclaims. “That’s our dynamic. All that’s missing is the make-up sex.”

RELATED: Santa Confirms Batman Has Officially Been a Good Boy

Though not every gamer’s favorite installment of the Arkham video game franchise, Arkham Origins offers some deep insight into how the Joker truly feels about his arch-nemesis. In a cutscene where the Joker sits down with prison psychiatrist Dr. Harleen Quinzel, the Joker dreamily recounts feeling a new sense of purpose in life after meeting “someone special.”

He claims their meeting was destiny, and that he no longer feels alone in an uncaring world now that he’s met someone with which he can relate. Their actual encounter was far more chaotic, with Batman saving the Joker’s life after the villain was blasted off a high rise by an exploding rocket. In return, the Joker saved Batman’s life by shooting a pair of armed goons who were about to kill him.

In the animated movie Batman: Hush, the Dark Knight squares off against the shape-shifting monster Clayface in the halls of Arkham Asylum. The battle quickly moves to the Joker’s cell, which leads to some hilarious dialogue from Mr. J. As Batman exchanges blows with Clayface, the clownish convict hints at feeling jealous.

“You’re seeing another villain already? I thought we had something special!” cries the Joker as Batman gets rag-dolled in front of his cell. When Clayface calls the Joker a freak, he then bemoans that Batman never stands up for him. It’s dialogue reminiscent of a campy rom-com, and while the Joker was clearly being facetious, his humor was still very much grounded in his authentic feelings for Batman.

Frank Miller has openly admitted that his portrayal of the Joker in his classic graphic novel The Dark Knight Returns was meant to have heavy queer overtones. Seeing their relationship as a sadomasochistic nightmare, the infamous comic book writer claimed Batman and Joker sublimate their physical urges with fighting. Set in a future where Batman temporarily retires, Miller’s Joker spends a decade in a catatonic state until his “darling” makes a dramatic return to Gotham.

With Bruce Wayne back in the cape and cowl, the Joker orchestrates a mass murder on live television before leading his nemesis to a carnival where they battle in the tunnel of love. Their final confrontation is brutally intimate, with the Joker repeatedly penetrating Batman with a knife while referring to Batman as “my sweet.” During their fight in the animated adaption of TDKR, Batman admits that he’s kept count of the Joker’s many victims, the murderous clown responds with “I know. And I love you for it!”

While there are over a dozen episodes featuring the Joker in Batman: The Animated Series, the episode “The Man Who Killed Batman” shows just how much his arch-rival truly means to him. Believing Batman to have been killed by a nobody low life, the Joker becomes inconsolably depressed upon realizing his thrill-seeking days with Batman were finally at an end.

Holding a funeral in Batman’s honor, the Joker delivers a powerful eulogy declaring the Dark Knight’s death “the day the clown cried.” Though the Joker hams it up a bit for dramatic effect, he also seems genuinely heartbroken at the prospect of never seeing Batman again.

When the Joker finds out that Batman is about to marry Catwoman, he doesn’t just voice his objection, he tries to bump off the bride-to-be. Worrying that marrying Catwoman would cause Bruce Wayne to hang up the cape and cowl, the Joker lures her into a church where he then shoots her in the stomach.

While both bleeding out on the floor, the Joker and Catwoman have a heart-to-heart regarding their feelings for the Caped Crusader. The Joker admits to being in love with Batman and feeling a constant longing for Gotham’s protector to beat him and call him a “horror.” He adds that he can’t understand why his counterpart always chooses to love Catwoman over him. “I’m… prettier than you” is her response.

Though written specifically with young children in mind, The Lego Batman Movie is crammed with suggestive innuendo poking fun at the intimate relationship the Joker and Batman share. During the film’s opening action sequence, the Joker suggests that their playful rivalry is special. Batman responds by cold-heartedly telling the Joker he means nothing to him.

To say the Joker was heartbroken by Batman’s harsh words would be an understatement. Feeling unappreciated by the Dark Knight, the Clown Prince plots Gotham’s destruction just to prove definitively that he is indeed Batman’s greatest enemy. When all seems lost, Batman confesses to “J-Bird” that he also has feelings for him and pleads for the Joker to help him save their relationship by saving the city. The two literally reconnect to save Gotham in a touching scene where it almost looks as though the two are about to kiss.

2. Death of the Family

One of the most popular stories to come out of DC’s New 52 relaunch was the crossover series Batman: Death of the Family. Tired of sharing Batman with the rest of his allies, the Joker systematically kidnaps each member of the Bat-family and attempts to murder them as the ultimate tribute to his love and devotion for the Dark Knight.

Like in The Wedding Album, the Joker openly confesses to Catwoman that he too is in love with Batman. But what’s special about Death of the Family is that even Batman begins to understand just how deep the Joker’s river of infatuation runs for him. When Batman stares into the Joker’s eyes to try to read his motives, he is startled to see the trademark signs of love in the clown’s pupils.

Hell hath no fury like a clown scorned. After seemingly falling to his death at the end of Death of the Family, the Joker returns more deranged than ever thanks to landing in a subterranean pool of life-reviving dionesium. Feeling betrayed by Batman’s refusal to let him murder his family and even angrier over the fact that Batman appeared willing to kill him in retaliation for it, the Joker poisons Gotham with a chemical cocktail that causes its victims to go into a grinning, homicidal rage. In the book’s grand finale, the duo fight to the death deep in the caverns below Gotham–the Joker all the while claiming he would have gladly given Batman the gift of eternal life had he only reciprocated his affections.

After a gruesome battle that leaves both the Joker and Batman mortally wounded, Batman defeats his foe by clinging to him and begging the Joker to stay by his side in his final moments. Taken aback by Batman’s sudden change-of-heart, the Joker hesitates, causing a falling stalactite to break his back before he can reach the revitalizing pit of dionesium. Batman’s final message to his allies before his inevitable death is for them not to worry about him–he’s just going to rest a little while with his “friend.” As life slips away from the two adversaries, their pool of blood makes the vague shape of a broken heart.

Since the relationship between Joker and Batman is older than most real-life romantic partnerships, there are likely even more stories that feature the Clown Prince of Crime professing his undying love for the hero he’s always trying to murder in horrific ways. The Joker really does love Batman in his own twisted way.

More: Joker Director Hasn’t Even Talked to Joaquin Phoenix About A Sequel Yet

Dorian Black is a writer for the comic book news section for Screen Rant. Having attended San Diego Comic-Con every year since 2004, he stays current on all the latest news relating to the world of superheroes, science fiction, and high fantasy. Aside from comics, Dorian also has a passion for filmmaking, having graduated with a degree in Film and Electronic Arts from CSULB with an emphasis in production. He wrote, directed, and produced his first feature while still in college, has worked on several television pilots, and even appears in Jon Schnepp’s endearing documentary The Death of “Superman Lives”: What Happened? Dorian is currently a pop-culture news host for Nerdbot Media and a contributor for Nightmarish Conjurings.
An avid cosplayer, Dorian Black can be found throughout social media hosting and managing events while masquerading as Batman, Superman, Pin-Head, Casey Jones, and SHAZAM (yes, the character’s real name is Captain Marvel). He has experienced some of the wildest nerd nightlife that America has to offer, meeting some truly talented fandom-inspired innovators in the entertainment industry along the way. When Dorian is not on the clock, he is also a big fan of photography—behind the camera, in front of the camera, and photo editing on his tablet.