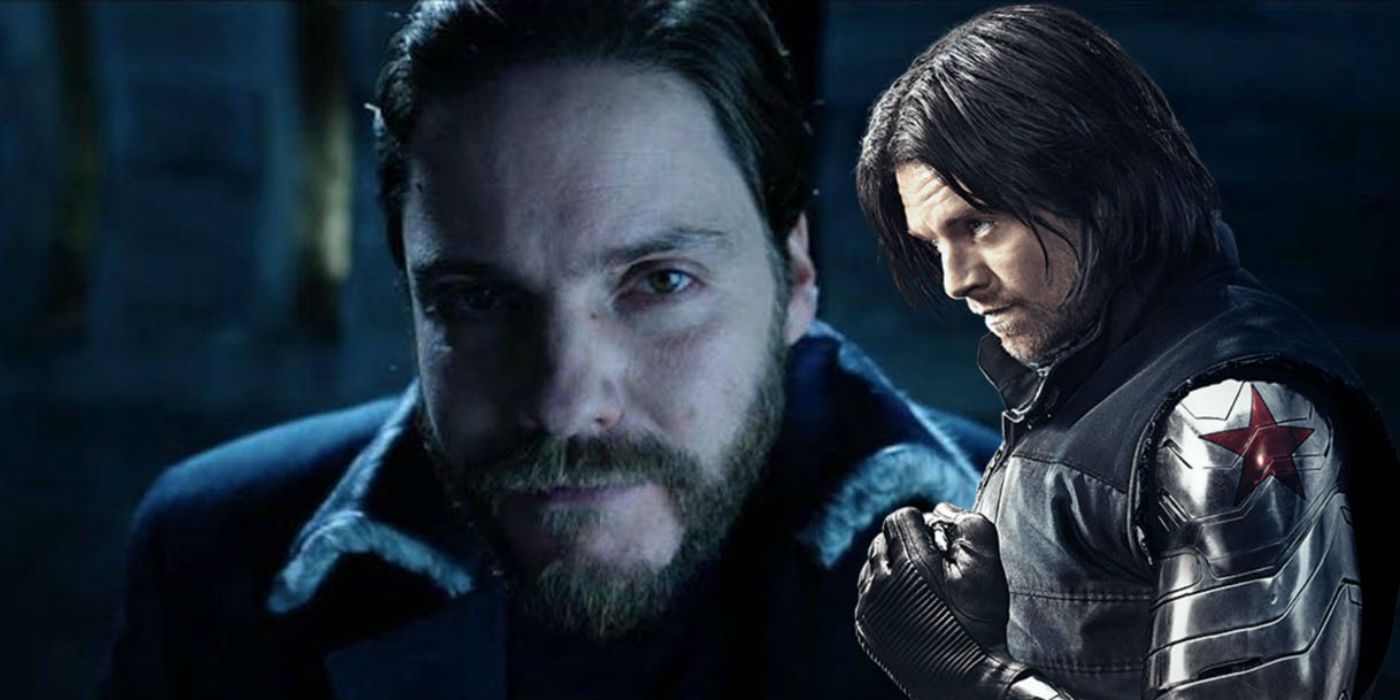 New The Falcon and Winter Solider set photos tease a scene where Bucky and Baron Zemo cross paths. From the upcoming Disney+ show, the photos hint at an encounter between James “Bucky” Barnes and Helmut Zemo in a darkened city, alongside a returning Sharon “Agent 13” Carter.

Set to arrive on Disney’s streaming service sometime in late 2020, The Falcon and Winter Solider will feature the continuing adventures Bucky and Sam “The Falcon” Wilson following the events of Avengers: Endgame, where their mutual partner and friend Steve Rogers/Captain America chose to remain in the past after returning the six Infinity Stones to their rightful places in time. An older Steve passed his mantle and Captain America shield down to Sam, leaving him and Bucky – who is looking to redeem himself after spending decades as a brainwashed assassin – to take on the threat of a returning Baron Zemo, who will now don his signature purple mask from the comics after lacking it in his first appearance in Captain America: Civil War.

The photos, shown on Daily Cosmic News’ Twitter page, feature Bucky, Zemo, and Agent Carter standing in a busy marketplace at night. They’re all shown separately, but these pictures are presumably from the same scene given the shared location. We can also see the new costumes the former two will be wearing in the show, with Bucky dressed in a leather jacket and sporting a shortened haircut not unlike the one he had during his World War II days in Captain America: The First Avenger. Zemo is clad in a long, fluffy collared overcoat befitting his apparent role as a terrorist revolutionary. You can check the images out in the tweet below:

When Bucky and Zemo last encountered each other during the events of Civil War, Zemo was manipulating the Winter Solider via his HYRDA brainwashing to enact a plan to destroy the Avengers from within, as he blamed them for the deaths of his family in the Battle of Sokovia. Bucky ultimately regained control of himself, but Zemo was able to drive a wedge between Captain America and Iron Man after revealing a video recording of Bucky killing Tony’s parents as the Winter Soldier, which in turn forced both Bucky and Steve to go into hiding in the country of Wakanda until Thanos’s actions forced them back into battle during the last two Avengers films.

This could provide some tension during the scene the new images depict, as Bucky will no doubt have a score to settle with Zemo after the Baron used him to cause such destruction. It’s still not yet clear what Zemo’s motives are for attacking Sam and Bucky, but it will likely involve his continued desire to get back at the Avengers. The psychotic smile he sports in one of the images also implies Zemo has grown increasingly unhinged since his previous efforts and subsequent time in S.H.I.E.L.D. custody. Perhaps whatever attacks he carries out lead Sharon and Bucky to the marketplace – perhaps in the previously teased Madripoor – where they aim to apprehend him before any more damage is done. Fans will see just what this encounter is all about when The Falcon and Winter Solider hits Disney+ later this year.

J. Brodie Shirey is just a simple man trying to make his way in the universe, but aren’t we all? He currently lives in York, Pennsylvania and works as a dishwasher at Shallow Brook Intermediate School. He is a big comic book, video game, and science fiction fan, and likes writing reviews on his blog during his off-hours, at least when he’s not writing articles for ScreenRant or scripts for some of his crazy TV show ideas.

A graduate from York County School of Technology, he’s self-published several books on Amazon, and once won 1st place at a regional computer fair for a CGI animated short. He might post it on Youtube someday. He hopes that working for this site will be his first step into the larger universe of online writing, since Megazord technology hasn’t been invented yet and he doesn’t seem to have any Force powers. You can check out his work at The Uncanny Fox, purchase his books on Amazon.com, see his posted scripts on Script Revolution or Script Mother, or see his portfolio here or here. He can also be followed on Twitter @FoxUncanny.