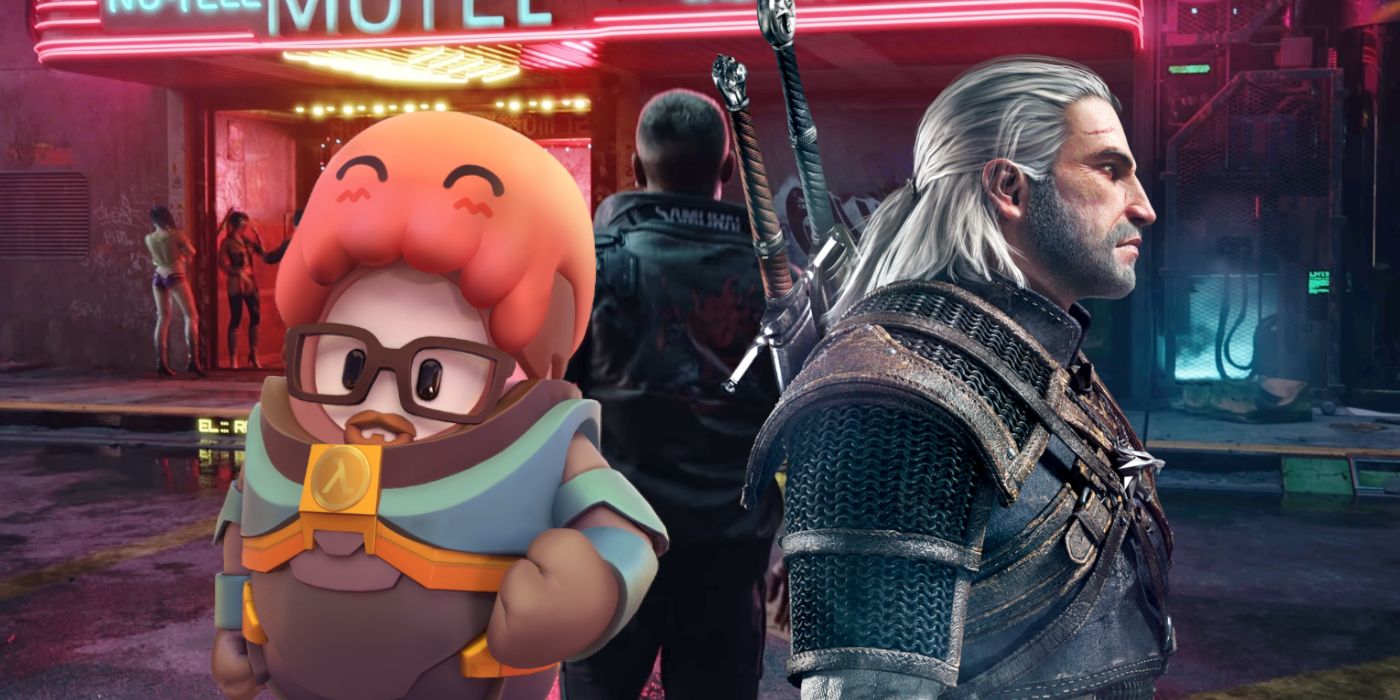 The impressive launch of Fall Guys may have gotten to Mediatronic’s head as it has solicited for a crossover with The Witcher and Cyberpunk 2077. The 1.5 million players who logged in on day one of Fall Guys were enough to catch the attention of CD PROJEKT RED – and it seems a collab could possibly happen.

Fall Guys is a cute and relaxing battle royale where 60 players compete in gameshow like challenges until one man, or jellybean, is left standing. The game has already seen one collaboration with another game in the short time it has been available. Players who pre-purchased the game of Steam were gifted a Half-Life themed costume, and the in-game store for Steam players allowed players to purchase an additional Half-Life skin. Skins are what set players apart as everyone starts with the same base pill-shaped body.

Related: Is Fall Guys Coming To The Xbox One And Nintendo Switch?

After a phenomenal launch, the official Fall Guys Twitter account tweeted directly at the official Cyberpunk 2077 account asking how many retweets they would need for a collab. Cyberpunk responded with “one.” Fall Guys quote retweeted the response asking its fans for a single retweet, but thousands of retweets flooded in. The Witcher’s official Twitter also chimed in saying, “LOL Cyberpunk. DM us for something more exciting.” Fall Guys responded to this tweet asking for The Witcher to follow them so they could DM each other, which The Witcher account stated they had.

Okay, I’ve just been on the phone with CD PROJEKT RED Legal Department

Fall Guys fans seem excited about the prospect of playing as a Geralt jelly bean, but who wouldn’t be. Memes focused on the two developers tweeting back and forth started to surface as fans began to get their hopes up for the potential crossover. Fans have also created mock-up artwork for costumes they would like to see in-game, which Fall Guys have responded to with interest. Fall Guys has also received collab solicitations from other companies including the Walmart Canada Gaming Twitter.

If games like Fortnite have taught gamers anything, it is that any crossover is possible. Fall Guys is unique in that the costumes in-game are not completely different characters like they are in other battle royale titles. They are costumes meant to give the player’s jelly bean a little more personality. While the team could make a white-haired wig and a sword that slightly resembles a Geralt costume without explicitly saying so, it is cool to see that Fall Guys is open to working with other developers on official collabs. And even if the tweets were all in good fun and nothing comes of the encounter, it’s nice to see comradery amongst developers both big and small.

Next: Fall Guys Attracted Over 1.5 Million Unique Players On Its First Day

Zackerie Fairfax is a Gaming writer for Screen Rant, and the editor for his local printed newspaper in Kentucky. He attended Elizabethtown Community and Technical College majoring in Creative Writing. In addition to writing about movies, television, and video games, Zackerie hosts the comedy-game-development podcast Games Sold Separately.