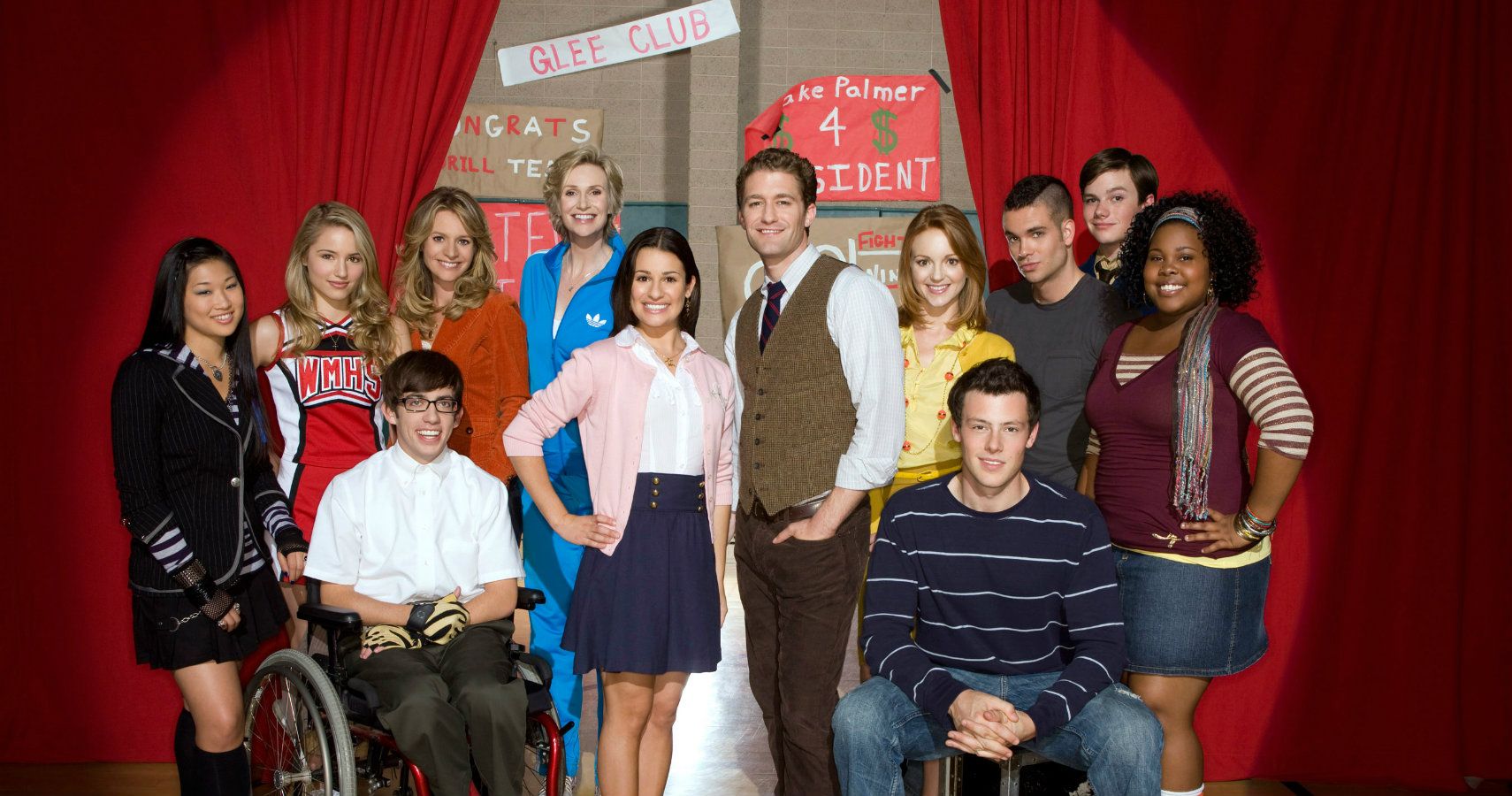 In 2009, Glee reminded audiences what it was like to be a high school kid who dreamed of stardom. The New Directions were a glee club in an Ohio suburb whose members dreamed of living and working in New York and Los Angeles. Mostly high school outcasts, the characters evolved from comedic high school stereotypes into bonafide stars.

The series lasted for six seasons. It had its ups and downs, but fans were overwhelmingly behind the series even when they hated the storylines. With more than 100 episodes broadcast, the series has an average rating of 6.7 on the Internet Movie Database. The top 10 episodes, however, all rank much higher.

Updated On July 9, 2020 By Amanda Bruce: Though Glee came to an end in 2015, it continues to maintain its popularity thanks to streaming sites like Netflix. With a new generation finding fodder for Tik Tok videos from its episodes and rankings continuing to change on IMDb, this list has been updated with the current top 15 episodes of the series.

This season two episode brought the Glee club together for a wedding, but also pulled them apart because of bullying. Kurt’s father and Finn’s mother walked down the aisle, with Kurt and his friends providing the songs, but most of the rest of the episode featured a more serious storyline.

Kurt found himself still as the target of Karofsky’s bullying. Though some members of New Directions attempted to defend them, it only resulted in Sam getting beat up, Finn scared to jeopardize his place on the football team, and Kurt finding out that Karofsky would only get a verbal warning from the school board. This is the episode in which Kurt decided to transfer to Dalton Academy, temporarily changing New Directions and bringing a fresh dynamic to the show.

This is the episode that launched the Karofsky bullying arc for Kurt, making his season two a tumultuous one. He frequently found himself the target of Karofsky’s anger, and when left without his male Glee club members interested in his opinions, left to “spy” on the Warblers for the afternoon.

That spying session gave the audience a look at what the dynamic would become between Kurt and Blaine, but it also gave Kurt the courage to try to talk to Karofsky with Blaine as his backup, though it didn’t go as planned.

This episode was one of the first tribute episodes of the series, with all of the music in the episode being none other than Madonna’s. Sue saw Madonna as the ultimate in female empowerment, and inspired by her, Will wanted to give the New Directions girls a path to empowerment as well.

While not everything changes just because the group belts out some Madonna songs, the boys do make a promise to be better to the girls. The group also gets to perform a gospel backed version of “Like A Prayer,” which remains a standout.

At the end of the third season, most of the New Directions members were heading off to the adult world. The season finale acted as a goodbye for those members.

Nothing happened exactly the way anyone planned. Kurt and Finn didn’t get into the schools they wanted, and Rachel planned to defer her acceptance to help them. Rachel, like the audience, was in for a surprise though when Finn decided to send her to New York instead of marrying her, making sure she got to follow her dreams. Likewise, Santana’s mother gifted her with savings to follow her dream, despite the two not seeing eye to eye.

The midseason finale of the third season brought a lot of storylines together to push events forward. While fans weren’t sold on the cliffhanger ending, they did like everything that came before it.

Karofsky, after being outed and facing torment of his own, attempted suicide, prompting teachers and students alike to examine their choices. The group decided to live every day like it’s their last, bringing them together for a strong showing to beat the Warblers at Regionals. Finn and Rachel also decided to get married right away, though their parents try to derail them.

With an episode title like “The Break Up,” it would be right to expect a major couple calling it quits during the hour. Instead, the episode that leads off the top ten involves five major couples ending their relationships.

Over the course of the hour, Blaine and Kurt, Rachel and Finn, Brittany and Santana, Kitty and Jake, and Emma and Will all reached roadblocks in their relationships. It’s significant that most of the relationships were long-distance as half of the cast was in New York for storylines. The breakups were like a giant reset for the show, allowing characters to grow on their own for a while. It also gave the audience a great acoustic version of “Teenage Dream.”

When “Dreams Come True” aired, it did so immediately after “2009” as part of a proper send-off for the show. It allowed fans to see just where most of their favorite characters ended up.

RELATED: Glee: 5 Relationships Fans Were Behind (& 5 They Rejected)

Following the arts programs being reinstated at McKinley, not only did the new generation of the glee club win nationals, but Will got an offer to be principal of the arts-focused school. That paved the way for a surprising choice to become the new glee club teacher – Sam. While Mercedes began her singing career in earnest, Rachel made a splash on Broadway, and several characters united in the future in New York. The hour didn’t have time to get to everyone, but it certainly tried. The only thing missing was one final rendition of “Don’t Stop Believin.'”

New Directions might not have won their regionals competition in the first season, but in high school, there’s always a chance to get things right the second time around. In this episode, the teenagers tackled writing original music.

While Sue Sylvester coached one rival and Kurt competed with another, the New Directions had to dig deep to write their own music. Rachel wrote herself a ballad, but the group bonded for a fun bop, “Loser Like Me,” which would probably have become the unofficial anthem for the show if the audience didn’t love “Don’t Stop Believin’” so much.

The aptly named “100” was the hundredth episode of the series to air. For the landmark episode, the show went back to what made it so successful.

It reunited nearly all of the original cast members for the “one hundredth assignment” for New Directions. New and old members sang new versions of songs previously performed on the show. It also brought back fan favorite guest stars Gwyneth Paltrow and Kristin Chenoweth, who wanted to do their part to save the club from being shut down, which led right into the second hour…

Intended to be watched immediately after “100,” this episode saw Paltrow’s Holly and Chenoweth’s April do their best to keep the glee club alive, but it didn’t exactly go the way they wanted. Instead, they simply gave all of the club members something to think about as they headed toward graduation.

RELATED: 10 Worst Episodes Of Glee According To IMDb

The episode title worked as a nod to the name of the club, but also to recognize that so many characters were going in literal new directions. Will left McKinley to coach Vocal Adrenaline when the club disbanded while all of the seniors made their college plans. Blaine decided to attend NYADA, and Santana gave up her understudy role on Broadway to travel. It was another big change to wipe the slate clean for the show, but it was dressed up in nostalgia, including another performance of “Don’t Stop Believin.’”

The first hour of the two-hour series finale was a nostalgia ride for fans. Glee flashed back to before the events of the pilot episode, exploring just why each of the original New Directions members decided to join. It was a love letter to fans who’d been with the show since the beginning.

Fans got to see how Rachel and Mercedes’ competition began, and that Kurt joined the club because his father feared he was suicidal from loneliness. Surprisingly, Artie and Tina only joined the club because friends dared them to audition. The episode added a lot of fun backstory to the characters – even if the continuity didn’t always add up.

The midseason finale of the first season, “Sectionals” found the New Directions triumphing over hardship. They overcame one obstacle after another in the hour.

First, the team had to contend with their competition without Finn. As he discovered Puck fathered Quinn’s baby, he quit the club. Then, they arrived at the competition only to find that all of their songs were being performed by the other clubs. The group had to band together to come up with new songs, some members giving up solos for others, in order to compete successfully. Finn saved the day by bringing them an idea for a new cover, and not abandoning his friends after all.

As the title of the episode suggests, the glee club made it to their regional competition for the first time. The episode teased a loss by stacking the judge’s panel with Sue Sylvester.

One of the best aspects of the episode is that it brought the end of the season right back to the very beginning. The series began with the first incarnation of New Directions singing “Don’t Stop Believin’” by Journey. Their regional performances were all covers of Journey songs. For some reason, belting out classic Journey is where New Directions was often at their best. In a nice twist, Sue actually voted for New Directions to win, though she was outvoted by the other judges. It’s Sue that helped keep the club going, working out a deal with Principal Figgins. She proved that the biggest antagonist on the series had a heart.

When “Nationals” aired on television, it originally aired as part of a two hour Glee finale. The second hour served as a goodbye episode for the characters who graduated high school. Perhaps this episode ranked higher simply because the audience wasn’t ready to say goodbye.

It could also be because this particular episode would have worked as a perfect fairy tale ending for the show. In it, New Directions made it to nationals, competing against Vocal Adrenaline and Aural Intensity. They repeatedly competed against the two throughout the season. Mercedes overcame food poisoning, Rachel overcame her nerves, as did Unique, and for the first time, the group was the best glee club in the nation. It would have made a great series finale if the show hadn’t kept going.

One of the most emotional episodes of the series happened to be the most well-received. Following the death of series star Cory Monteith, the cast and crew took some time off to grieve. When they returned, it was to film a send-off episode for his character Finn Hudson.

The episode didn’t go into detail about what happened to Finn, but it picked up right after his death. Throughout the hour, the members of New Directions got together to mourn him through music. Different ways of dealing with grief were explored as Kurt, Santana, Puck, Will, and Rachel were all spotlighted throughout the extended episode.

NEXT: Glee: 10 Times The Show Broke Our Hearts


Next
The 15 Best Rick and Morty Star Wars Inside Jokes

Amanda is a freelance writer in Florida. She holds a Psychology degree and loves superheroes and serial storytelling. Her favorite heroines include Black Widow, Blake Belladonna, and Sailor Jupiter.