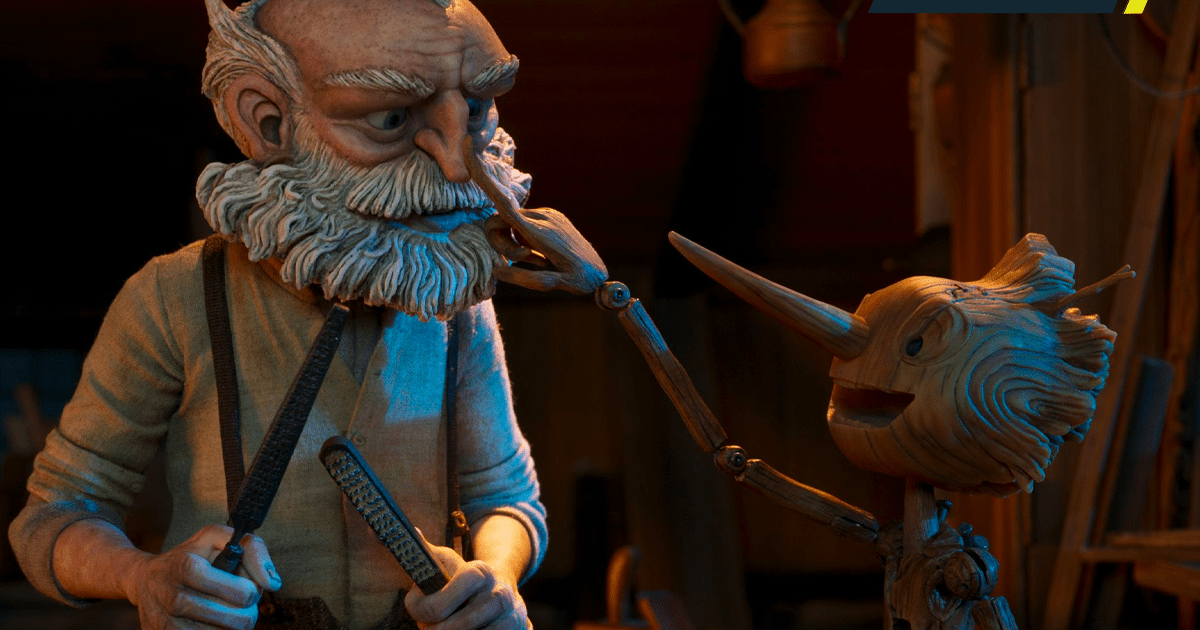 For the second time this year, the world is watching a story about a wooden puppet who dreams of becoming a real boy. Guillermo del Toro’s Pinocchio tells a tale as old as time. Since Carlo Collodi’s The Adventure of Pinocchio novel came out in 1883, this iconic story has been a staple of many lives, whether through the book or the 1940 Disney animated film. After Disney’s less-than-stellar attempt at reviving the tale with their live-action remake earlier this year, cinematic auteur Guillermo del Toro graces the screen with a phenomenal, exquisitely crafted animated film.

Some movies take months to make. Some movies take years. Pinocchio took over a decade. A passion project which began its tumultuous road in 2008 has been gloriously brought to the screen with Netflix, and the results are monumental. Del Toro’s love of the story comes to life as he makes a beautiful movie about a young, naive protagonist encountering the world around him from a unique perspective. This film is thematically rich, exploring life, its beauties, its ugly nature, and everything that comes with our existence on this planet.

This movie shines in every way Disney’s 2022 live-action film did not. While that film offered a unique blend of CGI and live-action, the avoidance of its source material and commitment to telling a more modern, sanitized version of the story is what held that film back from feeling anything more than a soulless cash grab. However, the passion and love of the source material shine through in every bit of del Toro’s film. The way this character influenced del Toro from his childhood is what made him the perfect person to helm this movie. He brings his soul to the project, co-writing and co-directing the film with numerous collaborators and crafting a beautiful cinematic experience.

What makes this movie stand out is its stop-motion animation. In an environment dominated by 3D computer animation, it’s fascinating when a director decides to go down a different route. Del Toro combines visual effects with intricate character models and sets. Filming began in January 2020, and everything about this film feels like a labor of love. The animators are some of the first names you see in the end credits of this film, showing the level of appreciation del Toro had for the crew who went through the tedious stop-motion process.

Their work pays off in volumes, as the lighting, cinematography, and how they bring a wooden puppet to life are remarkable. The craft on display is a miracle, and the voice actors match the film. Ewan McGregor is a surprise as Sebastian J. Cricket, who gets a lot of comedic moments, and his voice works perfectly for the character. A star-studded cast that includes David Bradley, Christoph Waltz, Tilda Swinton, Ron Perlman, Finn Wolfhard, and even Cate Blanchett as a monkey assistant rounds out the film, and they bring their unique talents to the table.

Del Toro also does an excellent job of updating the source material to his style, setting the story in Italy under the rule of fascist Benito Mussolini. The setting allows del Toro to put the character of Pinocchio in his world, with a historical backdrop that allows for different places for the story to go. Guillermo del Toro’s Pinocchio offers the best animation the year has had to offer, with a fantastic cast, gorgeous visuals, and a dazzling script. This labor of love pays off monumentally, taking a wooden idea and making it into a real film.