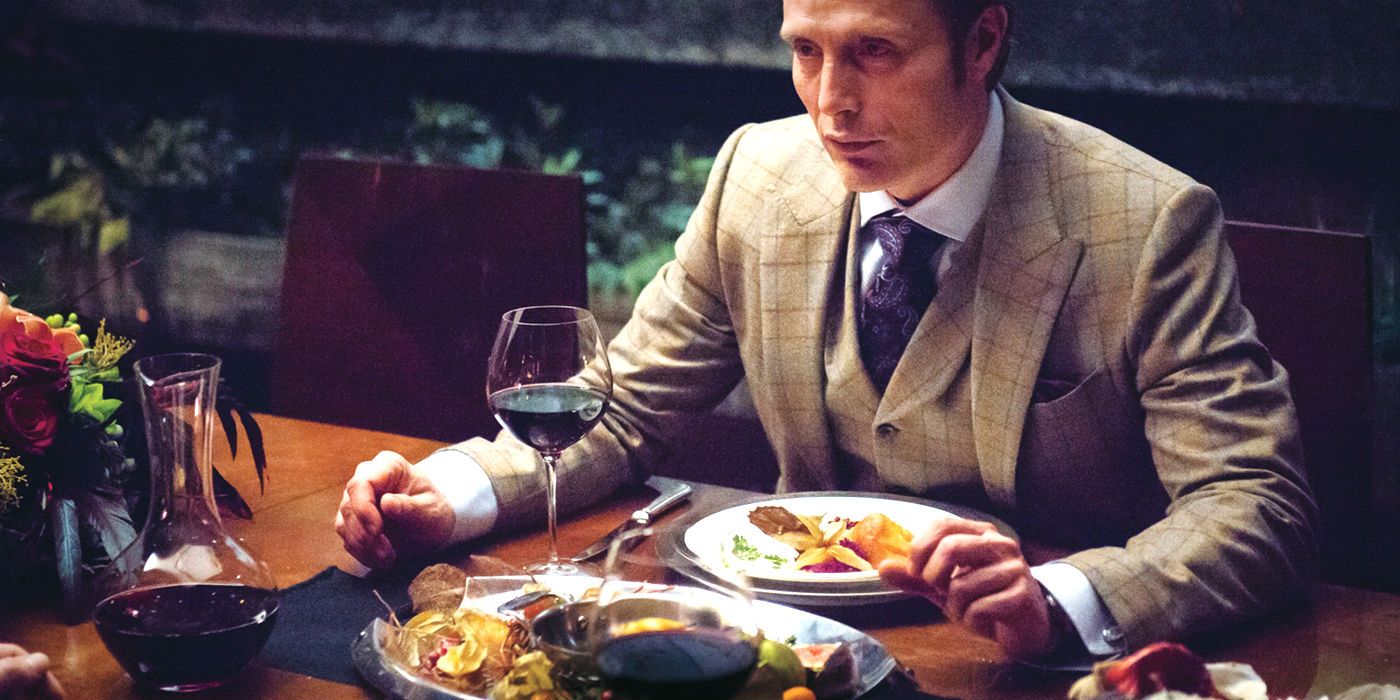 Bryan Fuller’s Hannibal series served audiences little hints in nearly every corner of his three-season series, even through the episode titles in each season, which share a theme.

Hannibal ran on NBC from 2013-2015, and fans are still hopeful for a fourth season, which Fuller claims is not a lost cause. The series was based off books by author Thomas Harris - Hannibal, Red Dragon, and Hannibal Rising – whose work served as inspiration for The Silence of the Lambs, which starred Anthony Hopkins as the iconic Dr. Hannibal Lecter. In the series, Hannibal Lecter (Mads Mikkelsen) orchestrates a series of brutal murders all while operating under the nose of the Behavioral Sciences branch of the FBI. He develops close relationships laced with sinister intentions with both Will Graham (Hugh Dancy), a gifted profiler, and Agent Jack Crawford (Laurence Fishburne), among others.

Related: The Silence Of The Lambs TV Show Is An Insult To Hannibal Fans

While stunning murder – and food – is on display throughout all three seasons of the show, Fuller was careful to leave little intriguing tidbits for his audience in nearly every possible avenue. This includes the episode titles of each season, which all share a common theme that is linked to the series’ cannibalistic antagonist in a very morbid way.

All the episodes in Hannibal season 1 involve French cooking and the traditional French cuisine structure of an elegant dinner or multi-course meal. Given Hannibal’s penchant for cooking and eating his victims, as well as serving them in elaborate, awe-inspiring presentation for his guests, this is a fitting theme. Much of the show tends to revolve around food to the point where some have described Hannibal as one of the best cooking shows that isn’t directly about food. Hannibal’s worldliness lends to further intrigue, and allows him to become an even more dangerous chameleon. Similarly, these qualities make him a well-rounded and even likable character, which has been played with before on television with shows like Dexter that also features a serial killer with personable qualities. Lecter is refined, a good host, and a generous man, but all that hides a darker edge, just like how the titles reveal bits and pieces of the show and cater to its overall theatrics.

The first season of Hannibal had 13 episodes. The first episode, “Apéritif”, refers to a pre-drink meal that is intended to come before any appetizer course as a warm up both for digestion and to engage the diners’ appetites. The next course, and episode, is “Amuse-Bouche”, which traditionally describes one-bite snacks that show off the chef’s unique style and prepares the guests for the upcoming meal. This makes sense as the second episode title, because it’s still in the exposition phases of Fuller’s story. “Potage” and “Oeuf” (episodes 3 and 4) refer to soup and egg courses, respectively, which are commonly seen as appetizers or hors d’oeuvres. Episode 5, “Coquilles” refers to a mollusk, which would be a seafood dish, sometimes referred to as “poisson” in French cuisine. Episode 6, near the halfway point of the season, is the “Entrée”, or the starter course of a meal.

Episode 7, “Sorbet”, refers to a traditionally light, fruit-based treat, often frozen. This is often served “entremets”, or between courses, as a rest course. Sensibly, this means the episode is meant to set up the downward slide toward season one’s finale and serve as a palate cleanser. “Fromage”, episode 8, refers to a cheese course that precedes the final courses, but won’t overload the stomach. Episode 9, “Trou Normand” is a drink served between courses; this is commonly believed to be able to restore appetite. “Buffet Froid” and “Rôti” (episodes 10 and 11) refer to a frozen, self-served course followed by the main course, traditionally meat. The final two episodes of Hannibal, “Relevés” and “Savoureax” are the last two courses; a final meat course and a savory dessert to finish.