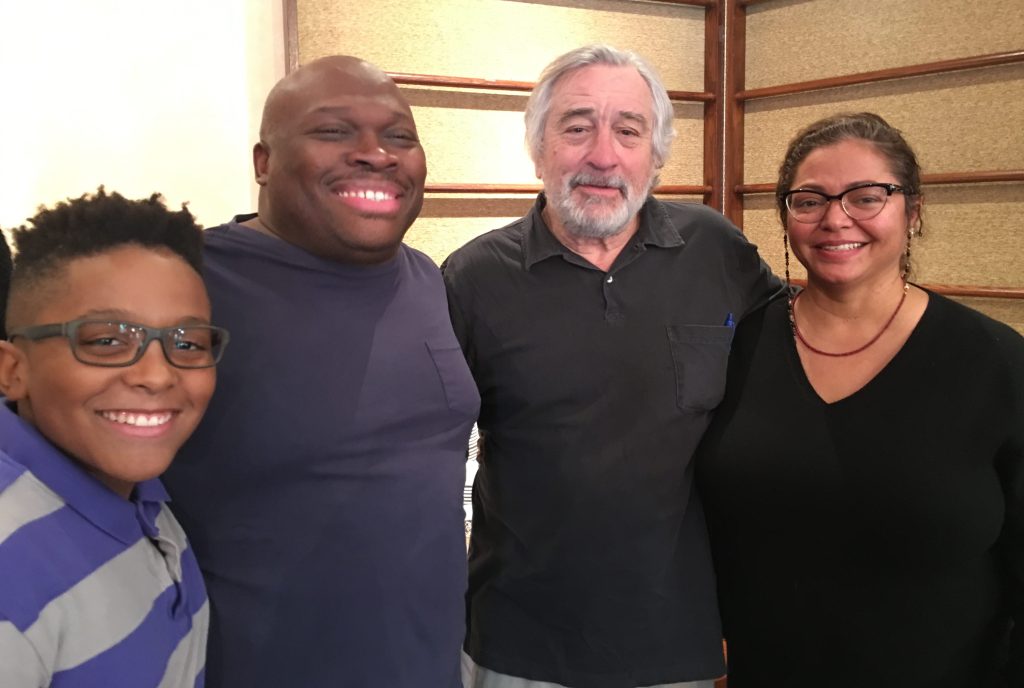 EXCLUSIVE: It’s been said that some movies aren’t necessarily born, rather they fight their way to life.

A lot of that responsibility falls on the shoulders of a film’s producer, who well after the cameras have turned off, and the set striked, sees a movie through to its endgame. That person in the case of 101 Studios and Brookdale Studios’ family comedy The War With Grandpa was Marvin Peart, who made certain that the movie, first pitched to him by his young son Tre Peart, would be realized on the big screen — and a pandemic nor a studio going out of business wasn’t going to stop it.

The War With Grandpa is expected to hit an interesting milestone at the domestic box office, crossing $20M ultimately fueled by the Thanksgiving holiday stretch. With the threshold of success being different for movies during the pandemic with the second largest exhibitor Regal closed, and main hubs like New York City and Los Angeles also shuttered, it’s a notable result for a low budget feature, apt to rival Solstice Studios’ Unhinged as the second-highest grossing movie since April behind Warner Bros.’ Tenet ($56.3M). That’s commendable, especially at a time when many distributors are fearing the big screen and simply dumping their movies straight onto PVOD or streaming.

In the wake of opening the Robert De Niro-Uma Thurman-Christopher Walken-Oakes Fegley comedy directed by Tim Hill, Marvin Peart is already plotting a sequel through his Brookdale Studios, The World War With Grandpa, with writers to be signed in the near future to work off the following logline which he says takes off from the pic’s ending where we see De Niro’s Ed now dating Jane Seymour’s Diane:

“That becomes the new hurdle for Ed and his grandson Peter. Even though they became closer, now there’s this woman pulling grandpa away again. Then the unthinkable happens…Grandpa proposes! The sequel circles around Ed’s family meeting Diane’s from London during the weekend of the wedding. It’s like fish-out-of-water; everyone has to get to know everybody, and Diane has a granddaughter who isn’t big on the idea of her grandmother marrying Ed,” says Peart about part 2.

For Peart, his wife and fellow producer Rosa Morris Peart, and his son Tre, an Executive Producer on the film, now 15, The War With Grandpa reps a seven-year journey.

At the age of eight in 2013, Tre brought the Robert Kimmel Smith book from Yearling publishers to his father’s attention. At the time of the pic’s announcement, Tre was noted as the youngest producer ever in motion picture history, well before Marsai Martin produced and starred in Universal’s Little at the age of 14.

Regales Peart, “We had a rule in our family. It was a way to encourage the kids to read more. If my son wanted to see a movie, he had to read the book. He brought the book for The War With Grandpa home, which was originally a school assignment, and loved it. But then he realized the movie didn’t exist. He turned to my wife and said, ‘Well maybe we can make it’. She taught him how to do a pitch and he pitched the book to me. I thought, ‘This is a great idea’. I read the book on the next flight and when I landed, I called my son and said, ‘Let’s call the publisher.’”

Peart was surprised to hear that the book, which was first published in 1984, was available to option. Not only that the multi-award winning kids’ novel had sold 1.3 million copies. After seeing the commercial potential in a story about a grandson who squares off with his recently-moved in grandpa, reminiscent of such ’80s family comedies like Uncle Buck and Beethoven, Tre sparked to the idea that Meet the Parents star Robert De Niro should play Grandpa.

Marvin promptly took The War With Grandpa to the Weinstein Company. He had worked with the studio as an executive producer and financier before on the 2012 animated movie Escape From Planet Earth ($75M WW gross) and the VH1 series of 82 episodes Mob Wives. Peart would co-finance the bulk of the comedy’s $38M production cost with Tri G LLC chipping in.  Weinstein picked up distribution. Cameras rolled in 2017. The pic was under TWC was initially expected to be released at different intervals, first Oct. 20, 2017 and then Feb. 23, 2018.

However, all good intentions for the pic’s theatrical release were initially derailed when the Weinstein Co. became unwound following the Harvey Weinstein scandal in October 2017. Peart brought Lantern Capital to the table as a buyer of TWC. However, it was apparent that Lantern wasn’t poised to be in the business of theatrical distribution, and Peart wanted War With Grandpa back.

Peart told Bob Weinstein at the time, “‘Let me buy this out. Whether you guys become this new distribution company or not, I want to be the master of my own movie’s destiny. How much? Just name the price.’”

And with that, Peart bought War With Grandpa back for $2.5M (his re-acquisition of the film occurred prior to his pending litigation with Lantern, with the producer claiming he was excluded from the Lantern deal).

Peart then shopped the movie to Aviron and Entertainment Studios, nearly making a distribution deal with the latter, but then backed out yearning for a studio that would give War With Grandpa a theatrical push like TWC intended. In the wake of those talks, Peart opted to be one of the investors in former TWC COO David Glasser and David Hutkins’ 101 Studios which launched in January 2019 with $300M in funding. While 101 Studios was dedicated to specialty releases, Peart then launched Brookdale Studios dedicated to “genre movies, family, animation, comedy, popcorn and soda” which would serve as a pipeline for broad release fare. A distribution deal for War With Grandpa was then struck with 101 Studios with Peart picking up the P&A spend.

There was some deliberation as to whether the movie should be released during the pandemic or not.

“Whenever there was a discussion to take the movie to PVOD, I shot it down,” claims Peart.

However, with the major studios largely vacating the theatrical release calendar in the wake of Tenet‘s muted domestic box office performance, 101 Studios saw the opportunity to zag where others zigged, seizing the opportunity to release a family film in the fall, when other distributors were shying from them, and over Columbus Day weekend. To spur foot traffic, 101 Studios created testimonial TV spots featuring families who enjoyed the movie and exclaiming how happy they were to return to theatres.

It’s like going to the movie theater for the very first time! The #WarWithGrandpa is finally NOW PLAYING in theaters! Click the link to find the nearest theater open to you and get tickets now: https://t.co/ZtFswPIhO6 pic.twitter.com/Lm0eMqwZ5u

Says Peart, “This movie was always intended to go theatrical. We didn’t make War With Grandpa to see it in the home first. We wanted this movie to have a theatrical experience. And if that could be done in a safe way during a pandemic, I’m all in.”