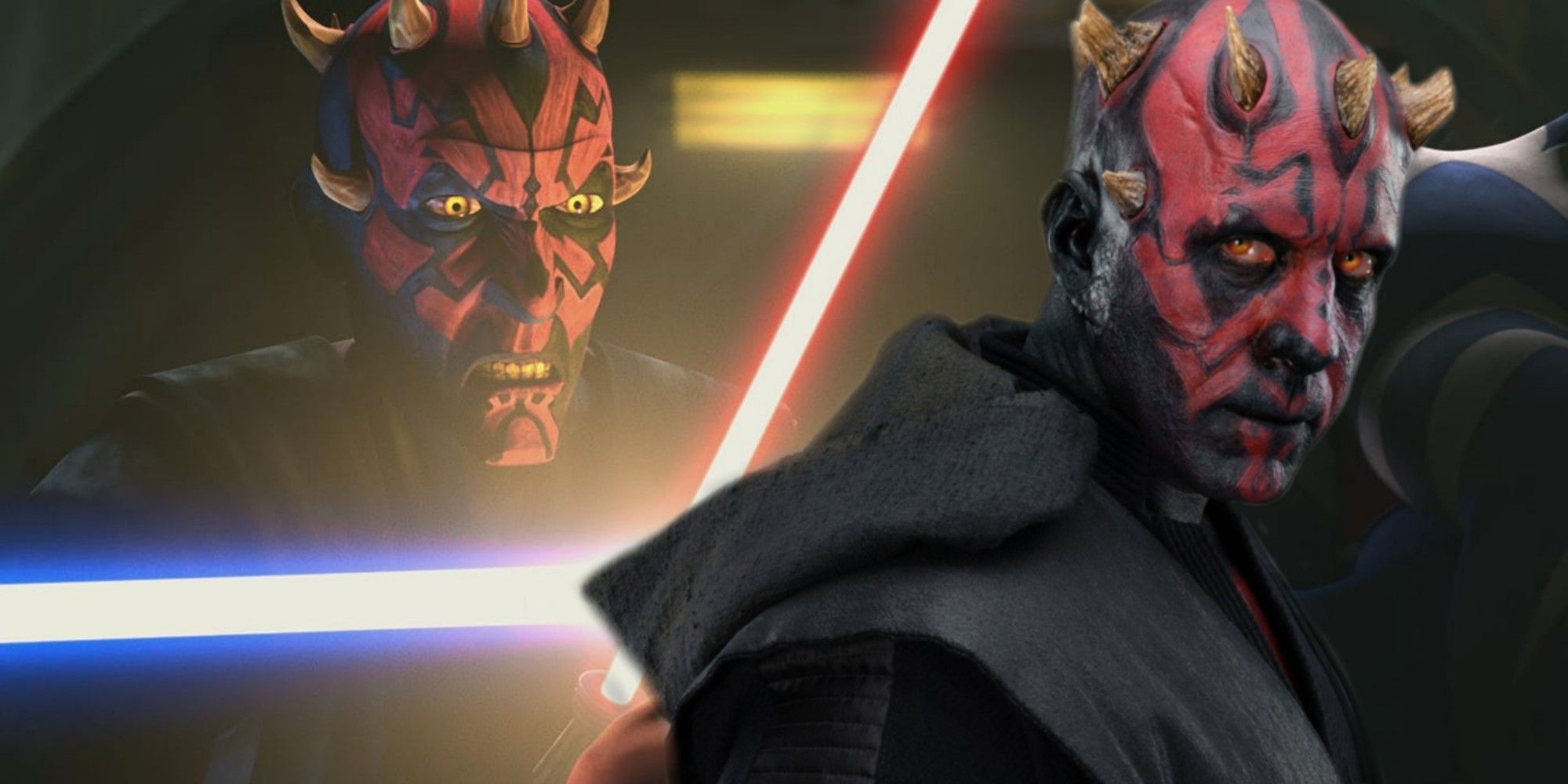 Maul’s journey from Star Wars: The Clone Wars to Solo: A Star Wars Story and Star Wars Rebels is a tedious one. Darth Sidious’ former apprentice is among the franchise’s most persistent entities. He’s seen it all, escaping imprisonment and death many times along the way. Most of his story is complete, but there are large gaps to be filled in. The most notable section ranges from the events of The Clone Wars to Solo and eventually Rebels.

The Son of Dathomir‘s story begins, and at one time ended, in Star Wars: Episode I – The Phantom Menace. He and his master prepared to strike and overthrow the Jedi. He made his presence felt, defeating Qui-Gon Jinn in an epic lightsaber duel. He had no time to celebrate, however, as a young Obi-Wan Kenobi avenged his master by cutting Maul in half. He miraculously survives the encounter, kickstarting a rivalry that would last decades. His endless hatred for Kenobi drives his decisions from here on out.

After regaining his mind, Maul gets to work plotting his ultimate revenge. He forms the Shadow Collective, a criminal organization that helps take over Mandalore. From there, he betrays the Death Watch leader Pre Vizsla and takes the throne for himself. With it, he seeks to ruin Kenobi’s life, going as far as killing his former lover, Satine Kryze. However, as the Clone Wars came to an end, so did the scope of his evil schemes. The Empire’s foundation complicated things, putting his life trajectory onto a completely different path.

The Siege of Mandalore

His road to the Imperial era begins at one of the Clone Wars’ final major conflicts. The Siege of Mandalore is an attack on the planet orchestrated by Bo-Katan Kryze and her Mandalorian resistance. They, along with Ahsoka Tano and legions of Republic forces, seek to liberate the planet. Maul held power there for too long, and thus their goal is to oust him from the throne and hold him accountable for his crimes. Losing his Duel of the Fates recreation with Tano, the Sith Lord is apprehended and is sent to the Jedi Council on Coruscant.

During his transport to the Republic capital, Darth Sidious initiates the long-awaited Order 66. The command calls for all clones to turn on their Jedi generals and whoever supports their survival. Amidst the chaos, Tano frees Maul from his imprisonment, giving him free rein to wreak havoc. He tears through countless clones and destroys the Venator-class Star Destroyer’s hyperdrive engines with the Force. As the ship careens through space, he hitches a ride on a nearby shuttle, making his grand escape.

Crimson Dawn & The Fall of the Shadow Collective

Due to his defeat on Mandalore, the already shaky Shadow Collective continues to crack. It inevitably disbands following the establishment of the Empire, weakening Maul’s power base. Sometime after his release from Republic custody, he takes up residence on Dathomir, his homeworld. Grasping for whatever power he has left, he becomes the secluded leader of the Crimson Dawn crime syndicate. He sets Dryden Vos, who appeared in The Clone Wars season 7 and Solo, as the public face of the group.

The two ran Crimson Dawn for some time, building a reputation as one of the galaxy’s leading criminal organizations. Things go smoothly until Qi’ra, Vos’ closest associate, kills him following a brief scuffle. She helps Han Solo escape with the refined coaxium they compiled for him. With him gone, she contacts Maul to alert him of what happened, pinning Vos’ death on Tobias Beckett. He is less than pleased, but urges Qi’ra to meet him on Dathomir to conduct further business.

Not long after the events of Solo, Maul’s fortunes turn to ruin once again. He travels to Malachor, crashing his ship which traps him there. He intends to find an ancient artifact hidden within the Sith temple there, which he was unsuccessful in doing for some time. Ezra Bridger, Kanan Jarrus, and Ahsoka Tano, surviving Order 66, arrive on Malachor, running into a disheveled Maul. He convinces Ezra to aid him in finding the trinket, revealed to be a Sith Holocron. With it, he could power a superweapon in the temple and exact revenge on Sidious for all he’d done to him.

Thanks to the intervention of Ahsoka and Kanan, as well as the arrival of the Inquisitors, his plan fails. He is, however, able to escape the planet via an Imperial TIE fighter. What’s more, his time with Ezra establishes a connection between them through the Force. He intends to take him as his apprentice, slowly manipulating the boy’s subconscious dark side tendencies. The two cross paths later on, with Maul combining his Sith Holocron with Kanan’s Jedi Holocron, revealing the answers they both seek. During the ritual, Ezra sees twin suns, while Maul has a vision of his old adversary, Obi-Wan Kenobi.

After their encounter, the two Force-users became mentally linked, sharing thoughts. Maul tracks Ezra down and brings him to Dathomir so that he can access all of his knowledge. Once again, they engage in a ceremony to do so, this time using old Nightsister magic. They learn that Kenobi is on a planet with twin suns with the key to destroying the Sith. The ghosts of the Nightsisters nearly kill Kanan and Sabine Wren, prompting Ezra to leave Dathomir and Maul behind. It’s no difference to the latter — he got what he needed. He then departs for Tatooine to end Kenobi once and for all.

The Final Confrontation With Kenobi

Lost and frustrated, Maul wanders the deserts for his mortal enemy. He knows he cannot find him alone, so he calls on Ezra through their Force connection. Out of fear that Maul will kill Kenobi, he quickly charts a course for Tatooine to protect him. At the same time, he hopes to bring the old Jedi in as a member of the Rebel Alliance. After an ambush by Tusken Raiders, which leaves his ship worse for wear, he too can’t find him. Ezra and Chopper trek across the desert, soon collapsing from exhaustion. When they come to, it is night and they are safe at Kenobi’s campsite.

Maul arrives at their location to settle the score before they depart. Ezra and Chopper are sent on their way, taking a dewback to return to the Ghost crew. At long last, the Son of Dathomir faces down the man responsible for derailing his entire life. He used their encounter on Naboo as fuel to get him to this point, and he’s ready to conclude their rivalry. They engage in a quick lightsaber clash before Maul is ultimately defeated. He collapses into Kenobi’s arms, inquiring about the true identity of the Chosen One. He dies from his wounds, and his sworn enemy buries him in the Dune Sea.

Maul is undoubtedly one of Star Wars‘ most tragic heroes, despite his evil deeds. His destiny is always within reach yet it evades him every time. His first “death” caused him to go insane, surviving on vengeance and hate alone. He rose to prominence once again during the Clone Wars, only for the rug to be pulled out from under him. He continued to deteriorate well into the age of the Empire, losing everything. His steady decline from The Clone Wars to Solo and finally Rebels is sad, to say the least.

Next: Darth Vader & Maul Had A Sith Showdown In The Comics

Shane started at Screen Rant in late 2019. From blockbusters to indie ventures, he’s there on opening night. He is currently attending the University At Buffalo for a Bachelor’s in Film Studies and has been studying film independently for years. He has also delved into the tedious world of stop-motion animation, putting together a handful of short films. When he’s away from movies, he can often be found in the gym. Of course, when he needs to wind down his Xbox controller is never far away. He can be found on all social media platforms @sheamus_oneill.

Too Much Horror Business! – The Impact of Horror on Rock Music
Kylie Jenner Is a Vision in White on Her Last Day of Filming Keeping Up With the Kardashians
Film Review: Satanic Meat Cleaver Massacre (2017)
Marianne Faithfull and Warren Ellis Unite for New Album With Nick Cave, Brian Eno, and More
‘Wonder Woman 1984’ Continues To Fall With $3M In Third Weekend Amid Pandemic & U.S. Capitol Woes