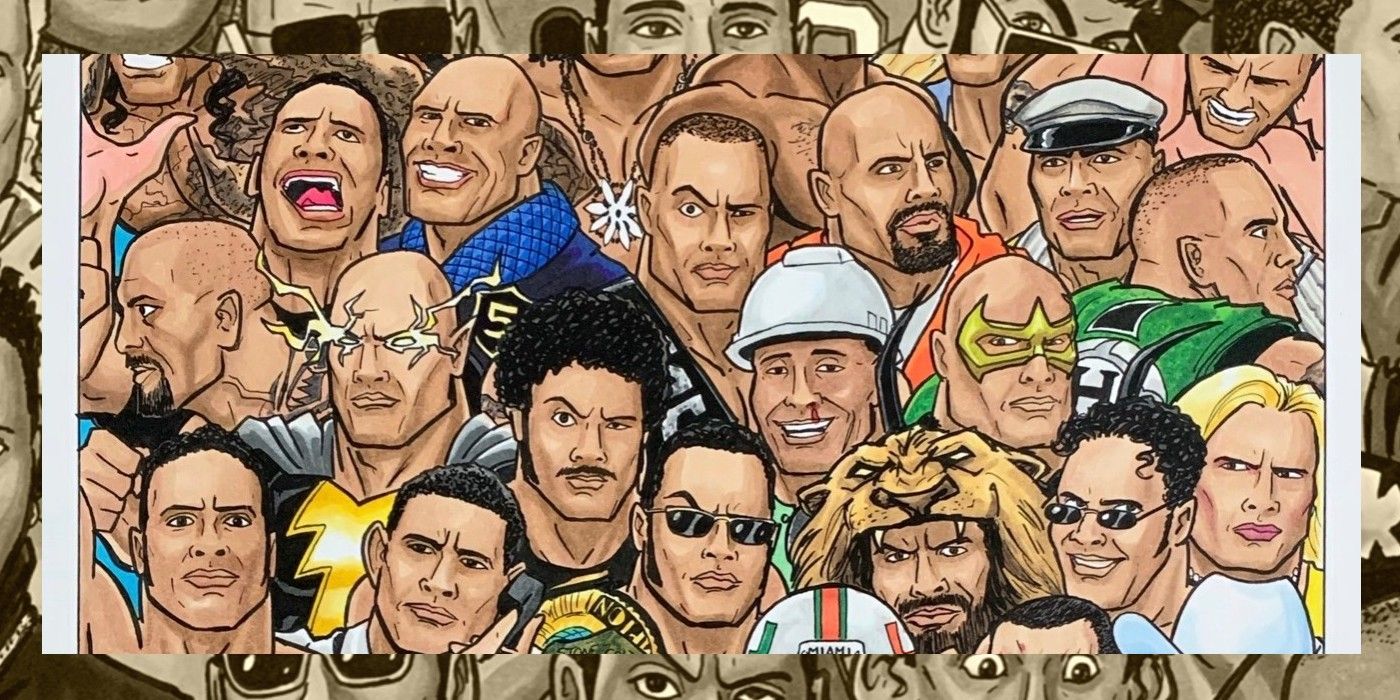 An incredible piece of fan art has combined all of Dwayne ‘The Rock’ Johnson’s roles into one, and The Rock himself has approved. For years, Johnson was known primarily as The Rock, one of the premier superstars of the WWE. But not long after his Hollywood debut in the 2001 The Mummy Returns, Johnson took “the biggest risk” of his life by retiring from the WWE in 2004 and stepping into acting full time. However, that decision has led to the incredibly charismatic former wrestler becoming one of Hollywood’s top stars with many memorable on-screen characters like Fast and Furious’ Luke Hobbs and Moana’s Maui under his belt.

Although Johnson occasionally steps back into a WWE ring, like for SmackDown’s debut on FOX, he focuses primarily on enhancing and growing his hugely successful acting career. The wrestler-turned-actor is now scheduled to complete his Netflix film Red Notice next month. Following that, he will shoot his very first superhero film in 2021, the much anticipated DC project Black Adam, which fans got a small glimpse of thanks to a new DC FanDome trailer. But as Johnson continues to build his career with even more high profile roles, a new piece of fan art has allowed the Hollywood superstar to appreciate both his past and future roles.

Yesterday, artist Hal Haney tweeted a brand new, fun and thoroughly detailed piece of art, “The People’s 50 Shades,” that captures the career of Johnson, with many of his different looks as The Rock in WWE, including his return to the ring in 2012. The art also highlights some of Johnson’s standout and most successful Hollywood roles like Luke Hobbs, Maui, and of course, his breakout character, The Scorpion King (both The Mummy Returns and The Scorpion King film versions). Interestingly, the art also looks ahead with an illustration of Black Adam and what looks to be The Rock’s character in Jungle Cruise wearing a sailor’s hat. Also, what made the art even better was that Johnson himself retweeted it, praising the detail, and expressing his gratitude for his “journey.” Full tweet can be seen below:

Aside from the level of detail on the illustrations, what makes the art so great is it has some subtle inclusions that fans of both sides of Johnson’s career will enjoy. Whether it’s the homage to his father and grandfather and Triple H imitating The Rock on RAW for the wrestling fans, or the amusing head of Kevin Hart poking out from the bottom for the film fans, this art is full of fun little Easter eggs. Of course, there is the potentially inadvertent reminder that fans still have Disney’s Jungle Cruise coming, as the film was delayed until next year due to the coronavirus pandemic.

Although the coronavirus has drastically slowed down Johnson’s usual chaotic schedule, he has still been moving forward during this pandemic as his new superhero film with Emily Blunt will join Netflix, season 2 of Titan Games TV show has aired, and he has even provided an update for Hobbs and Shaw 2. So while the wrestling and Hollywood megastar clearly appreciates what he has done so far, it’s clear that Johnson aka The Rock, is still looking to do bigger and better things moving forward.

Next: Why Doom Fans Have Turned Around On Dwayne Johnson’s Movie

Which PlayStation 4 Game Has The Biggest Open World?
Related Topics
About The Author

Humza Hussain is a Screen Rant News Writer who has studied and covered the film industry for the past six years. He has reviewed countless high profile releases such as Hobbs & Shaw and Dragged Across Concrete and interviewed names like director S. Craig Zahler and Stephen Moyer for VultureHound Magazine. Humza also dabbles in the world of professional wrestling, as well as having a keen interest in various other combat sports.

Ken Jennings Will Be First Guest Host of ‘Jeopardy!’ After Trebek Episodes
Two MAD Magazine guys FINALLY parody Hitchcock’s “Psycho”
What Holiday Horrors Are On Your Christmas Wish List?
The Best Black Friday and Cyber Monday Deals Of 2020
Charles Barkley Uses Golf Balls with Shaq’s Face on Them at ‘The Match 3’