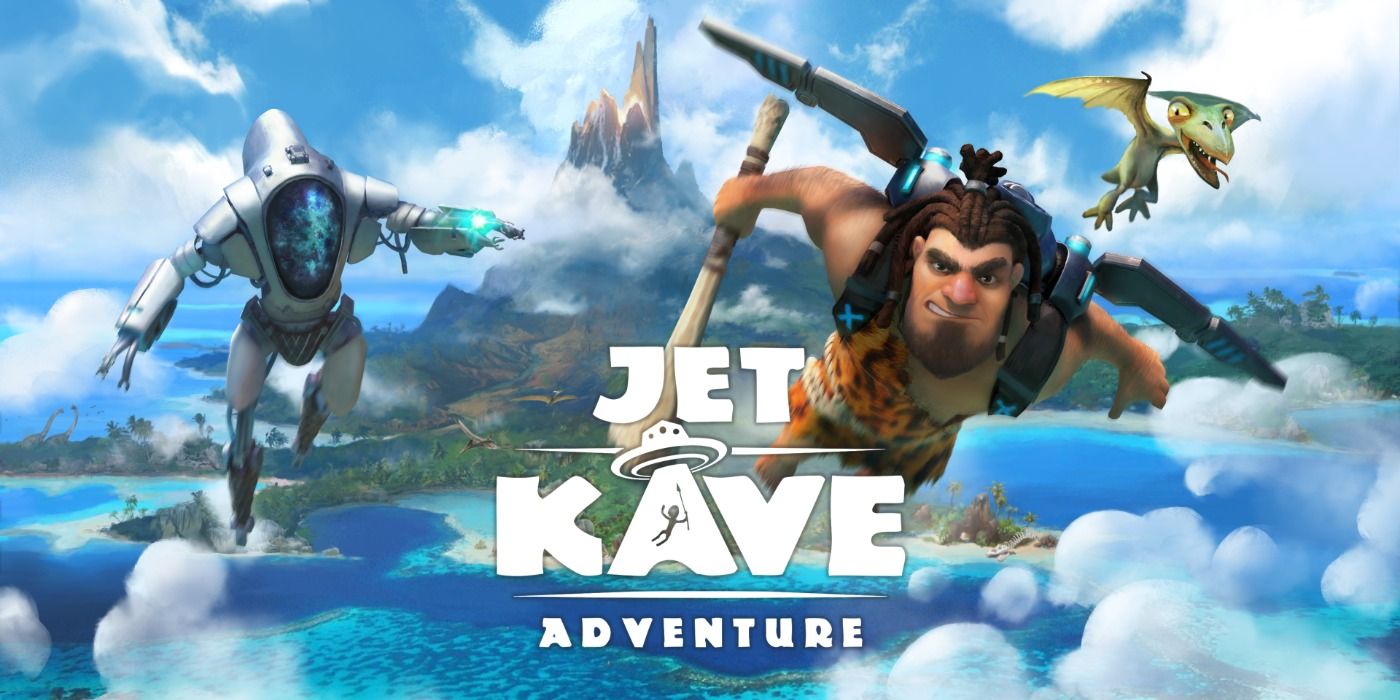 Jet Kave Adventure is a fun platformer that wears its inspirations on its sleeve and ends just as it feels like it’s starting to warm up.

Jet Kave Adventure is a 2.5D platformer from Polish indie dev 7Levels that’s heavily inspired by the Donkey Kong Country series. The game offers an enjoyable platforming experience that will please fans of retro Nintendo titles and are seeking a short return to a familiar style of game.

The majority of platform games on the market will either take inspiration from the Super Mario Bros. series or Metroidvania titles. Jet Kave Adventure takes inspiration from the Donkey Kong Country games, most notably the ones developed by Retro Studios in recent years. The game uses a 2.5D approach with the main character running around a 3D world while restricted to a 2D plane. Jet Kave Adventure uses this style to tell the story of Kave – a caveman who was exiled from his tribe following a disastrous hunt and who must survive on his own in the wilderness. Kave stumbles across a crashed alien spaceship and finds a jetpack that he can use to fly for short periods of time, and with it must journey through a cartoon world of dinosaurs and wild animals in order to learn about the origins of his newfound method of flight and discover the fate of the ship’s pilot.

Kave lacks the double jump of other platforming protagonists, but he can use his jetpack to float for short periods of time, as well as fire himself forward with a brief burst of speed. The majority of the jumping puzzles in Jet Kave Adventure are tied to this mechanic and the player must master the movement of Kave’s jetpack in relation to its limited fuel supply in order to finish each stage. The most enjoyable parts of Jet Kave Adventure come from using the environment to its fullest with Kave’s jumping/flying abilities, especially when rewarded with secret areas filled with items. There are also a few gimmick stages where Kave flies a hang glider – using a similar control scheme to Mario’s cape in Super Mario World. There are also vertical levels where his jetpack is super-charged and he can fly while dodging obstacles.

The levels are often filled with wild animals that players can avoid or fight using a club and a slingshot. The combat in Jet Kave Adventure is simple and functional, as it’s not the main mechanic in the game. There are encounters with several boss monsters too and they follow the same basic formula of avoiding their moves until they become dizzy, leaving them vulnerable to a hit. It’s a shame that the bosses weren’t given more variety in how the player could handle them.

Jet Kave Adventure involves collecting items which players can trade in-between stages to gain upgrades, such as a longer weapon or an increase to Kave’s maximum health. The search for collectibles to buy upgrades should give the player a reason to scour each stage for secrets, especially as the jetpack has allowed the developer to hide items just out of sight. It’s also possible for Kave to find food items throughout stages which serve as health refills, and offer an incentive for taking on enemies for their meat.

The backgrounds of Jet Kave Adventure are one of the highlights of the game, as the prehistoric world is teeming with life, telling a vibrant story of its own. The game also runs great in both TV and handheld mode without performance issues on the Nintendo Switch. The same level of quality isn’t quite as present in the character models, with many of the cast members looking like rejected concepts from a DreamWorks movie. Kave himself suffers the most in this regard, as he is visually unappealing and his animations are basic at best. The enemies that Kave faces fair a little better, especially the boss monsters, as they at least have a reason to be hideous.

Jet Kave Adventure offers a fun ride, but one that ends all too soon. The game features thirty-six levels and it’s relatively easy to burn through them in around six to eight hours. The length of the game isn’t helped by the fact that the player has infinite lives and the checkpoints in each level are given out liberally, while also refilling Kave’s health whenever he passes one. The game will scratch the itch of anyone looking for a new retro platformer or something reminiscent of the Donkey Kong Country series. What it lacks in length it makes up for with gameplay that rewards skillful timing and well-designed levels that beg to be explored.

Jet Kave Adventure is available on September 17 for Nintendo Switch. A digital copy of the game was provided to Screen Rant for the purposes of this review.

No, Britney Spears’ Art Is Not Getting Its Own Exhibit in France
STAY ALIVE, a horror-comedy Graphic Novel Coming 1/20/20 from Markosia
Everlane Is Finally Dropping Activewear, Get the First Look
The Batman: Robert Downey Jr. Excited About Robert Pattinson’s Bruce Wayne
Follow Our New Twitter Account!