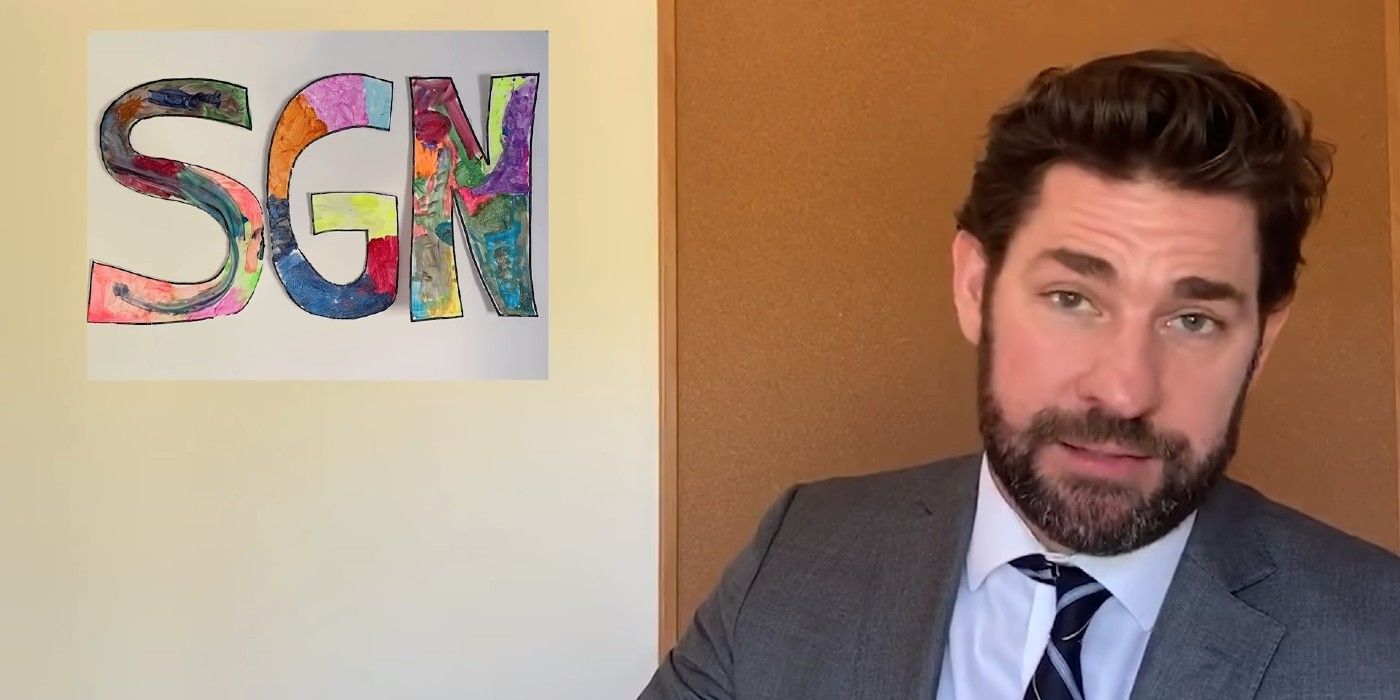 John Krasinski’s Some Good News is becoming an actual TV show. Having been one of the most beloved cast members on NBC’s remake of the Ricky Gervais and Stephen Merchant series The Office, Krasinski’s profile has continued to grow considerably.

Most recently, the former Office star has found tremendous success with his low-budget post-apocalyptic sci-fi/horror film, A Quiet Place. Shot on a meager budget of $17 million, the film went on to gross over $300 million and even snagged an Oscar nomination in the process. Krasinski’s follow up sequel was set to be released on March 20 of this year, but unfortunately, A Quiet Place 2 became just one of many productions adversely affected by the Coronavirus pandemic. With the film now tentatively due to arrive in September, Krasinski has utilized his skills to come up with a web series called Some Good News. The series kicked off on March 29 and quickly became a hit, with Krasinski broadcasting from home while highlighting news stories that have a positive and uplifting effect. In addition to this, he’s invited guests such as Steven Spielberg, Oprah, and of course, the cast of The Office on to the series via Zoom. To date, the web series has 2.56 million subscribers.

With such a high degree of success arriving as a result of Some Good News, Variety has now reported that the Krasinski web series has been picked up by ViacomCBS to air across a variety of the company’s properties. Comedy Central Productions will produce the weekly series, which is expected to kick off on CBS All Access before becoming available on other streaming and linear networks. As well as releasing full episodes, segments of SGN will also now be aired on CBS news. Said, Krasinski:

“Could not be more excited and proud to be partnering with CBS/Viacom to be able to bring ‘Some Good News’ to so many more people. From the first episode, our goal was to create a news show dedicated entirely to good news. Never did I expect to be joining the ranks of such a historic news organization as CBS.”

Despite having created the series and being one of its greatest draws, Krasinski will no longer be the program’s weekly host, though he will return now and again for appearances. The idea of a news series that focuses on the positive rather than the negative seems like a straightforward and logical concept. However, although programs like The Daily Show and Last Week Tonight have found great success by laughing at the world’s all too often crazy news stories, it seems to have taken a pandemic to highlight the need for a series that reports on the good side of humanity. Krasinski had previously worked on the concept for Some Good News with his partner Allyson Seeger for the past seven years.

Krasinski seems to have the magic touch as of late, and the success of SGN on YouTube will hopefully carry over now that CBS has gotten involved. At the same time, now that the series will be on to bigger and better things, maintaining the simplicity and fun that it embodied might very well be difficult to replicate. Bigger is not always better, and perhaps some of what made SGN so charming was not just that it told positive stories during a difficult time, but that it felt small scale despite celebrity involvement. If CBS can retain this aspect of the series, especially once a new host takes over, then SGN can only get better.

Next: The Office: The Character John Krasinski Nearly Auditioned For (Before Jim Halpert)

Mike Jones is an author, screenwriter, world traveller and cinephile. His work has been featured in print and online in a variety of publications, and he’s also a Berlinale Talents alumnus. Cinema has always moved him in a big way and aside from having seen The Talented Mr Ripley more times than any other living person, he maintains a pretty darn healthy physical media collection. His favourite filmmakers include: Jordan Peele, David Lean, Alfred Hitchcock, Mike Leigh, Steven Spielberg, the Dardenne Brothers, Noah Baumbach, Michael Haneke, Barry Jenkins and Andrea Arnold. Often jet-lagged, Mike once turned down a certain A-list celebrity’s offer to join them for a night of partying after a strange encounter in an airport.