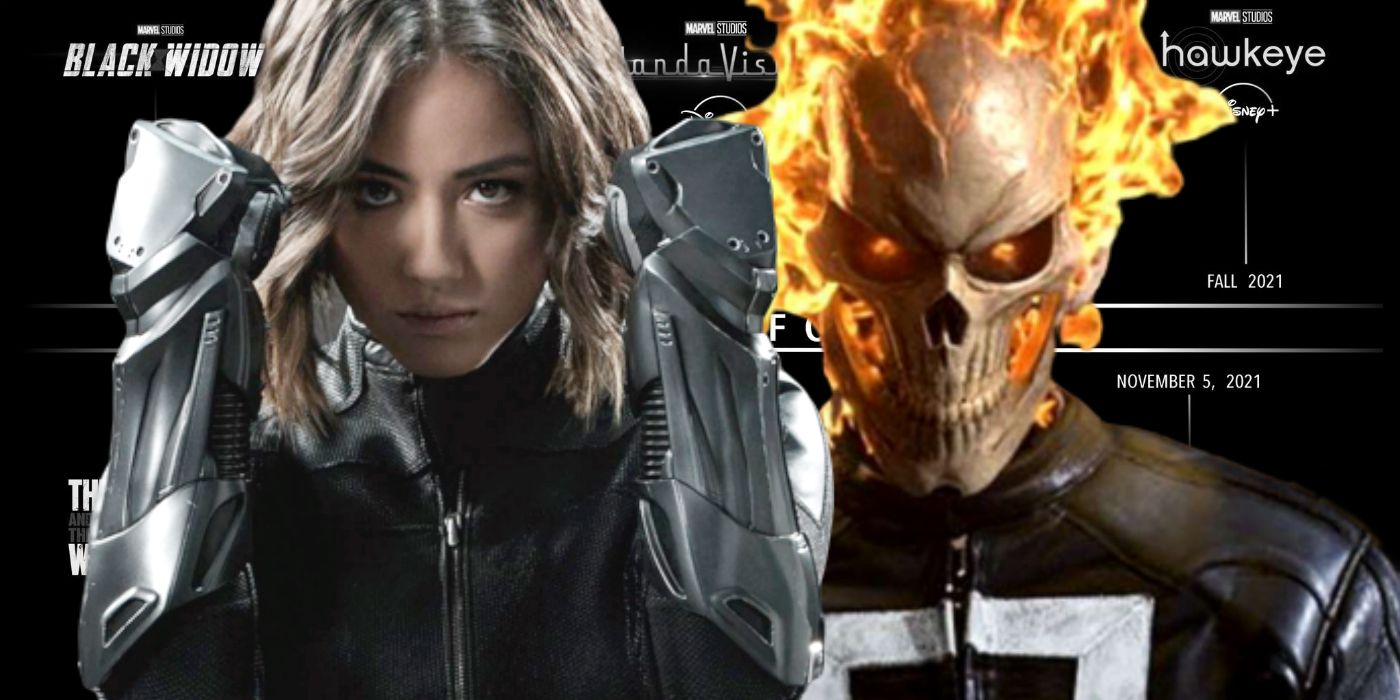 Marvel’s Agents of SHIELD is coming to an end after season 7, but the MCU still needs it for after Phase 4. In 2013, Marvel Television launched Agents of SHIELD, their flagship TV series. At first, there seemed to be a close relationship between Agents of SHIELD and the Marvel movies; the TV series picked up where The Avengers left off, with a resurrected Phil Coulson. Over the years, though, the films and TV shows parted ways.

In 2015, behind-the-scenes drama forced Disney to conduct a major corporate restructure at Marvel. They pulled Marvel Studios out of Marvel Entertainment, and set Kevin Feige up as president. From that point on, the films showed little interest in cooperating with the TV division. The stars of Agents of SHIELD were none too pleased. “People who make movies for Marvel, why don’t you acknowledge what happens on our show,” Chloe Bennet complained. “‘Cause they don’t seem to care!… The Marvel Cinematic Universe loves to pretend that everything is connected, but then they don’t acknowledge our show at all.“

Now, though, the corporate politics seems to have drawn to an end. Feige has officially been appointed Chief Creative Officer of Marvel Entertainment, and he appears to have used his newfound position of influence to wind down Marvel Television. The general assumption is that the Marvel TV shows will be forgotten – but Marvel would be wise to keep Agents of SHIELD. Agents of SHIELD was more popular than any Marvel Netflix show, and it was the favorite TV series during beta testing of Disney+. What’s more, in creative terms, Agents of SHIELD has a lot to offer the MCU.

When Agents of SHIELD began, the series technically starred Clark Gregg’s Phil Coulson, and the first two seasons explained his resurrection. But, as the years have passed, Chloe Bennet’s Quake has increasingly become the star – as well as its most prominent superhero. The character was introduced as just another computer hacker, but unwitting exposure to Terrigen triggered her Inhuman genes and transformed her into a powerhouse who can manipulate vibrations. Her powers have since been amplified, and her adventures have taken her through time and space. Given how well the character has been developed, and how potent her powers are, it would be a real shame to waste Quake.

In the comics, Quake is one of the world’s foremost superheroes, as well as a top SHIELD and Nick Fury loyalist. That perfectly positions her to play a major role in the MCU’s Phase 4 and beyond, given Nick Fury is clearly working on a major new project. This appears to be SWORD, an elite organization dedicated to defending the Earth from alien threats. Quake could easily become a high-ranking agent in SWORD, perhaps serving as one of Fury’s lieutenants; the arc could easily be adapted from Jonathan Hickman’s Secret Warriors run, where she led a group of superhuman rookies under Fury’s command.

Robbie Reyes’ Ghost Rider Is Too Good To Waste

Agents of SHIELD season 4 introduced Gabriel Luna as Robbie Reyes, the All-New Ghost Rider. The character was an absolute hit with viewers, even if he was expensive for Marvel Television – they had to limit his role because of budgetary constraints. Still, Marvel Television sensed they were on to a winner, and they entered a partnership with Hulu to produce a new Ghost Rider series. The Ghost Rider spinoff series was sadly cancelled during pre-production, and it’s generally believed this is because Kevin Feige had other plans for the Spirit of Vengeance. Luna himself doesn’t appear to hold out hope for returning. ”I was gearing up for Ghost Rider for some time, a few years now, just on hold, waiting,” he observed. “So I guess there’s not much hope holding out.” Again, though, such a popular portrayal would be wasted; his version of Ghost Rider is made for the kind of big budgets Marvel Studios can command.

Related: Agents of SHIELD: Every MCU Movie Character Who Appeared

Robbie Reyes’ Ghost Rider brings a lot of other ideas into play as well, ones that could be useful in Phase 4 and beyond. In Agents of SHIELD season 4, he was connected to the Darkhold, an ancient book of forbidden knowledge that was compiled by the Elder God Chthon, who ruled Earth millennia ago. The Darkhold is the key to Chthon’s return, containing magic that can pierce the boundaries between dimensions. In the comics, Chthon is strongly tied to Scarlet Witch; Wanda Maximoff was born at a place where the walls between dimensions were thin, and Chthon was able to imbue the infant with latent magic to help bring him to Earth. The Scarlet Witch appears to be becoming increasingly important in Phase 4, co-starring in her own WandaVision TV series and then playing a prominent role in Doctor Strange in the Multiverse of Madness. Meanwhile, even the Darkhold has been subtly alluded to; Doctor Strange featured another magical tome, the Book of Cagliostro, which in the comics was partly compiled from the Darkhold.

The Inhumans Have Been Seeded In Agents of SHIELD

But here’s the catch; Marvel Studios now has to deal with the Inhumans, sooner rather than later. Feige has signed off on a Ms. Marvel TV series featuring Kamala Khan, a teenage superhero who was inspired by Carol Danvers. In the comics, Kamala is actually an Inhuman, a native of New Jersey whose powers were activated when she was exposed to Terrigen in the atmosphere. All signs are that Marvel Studios intend to tell a comic-book-accurate version of Kamala Khan’s story; indeed, leaked character profiles have explicitly referenced Inhumans. Marvel Studios has never liked to repeat something that’s been done before, and yet to get Ms. Marvel they have to do just that; they have to explain Terrigen, and then release it into the environment somewhat. Alternatively, of course, they could just choose to pick up where Agents of SHIELD left off, accept the show as canon in the MCU, and present Kamala Khan as just the latest person to undergo spontaneous Terrigenesis. Of course, it’s safe to assume the Inhumans TV series will be forgotten; but even its stars are OK with that.

Marvel’s Agents of SHIELD has been a phenomenal success, and it deserves to go out with a bang in its final, seventh season. But when that story comes to an end, Marvel Studios would do well to pick up some of the show’s best concepts and characters, and integrate them into the MCU rather than simply ditch them.