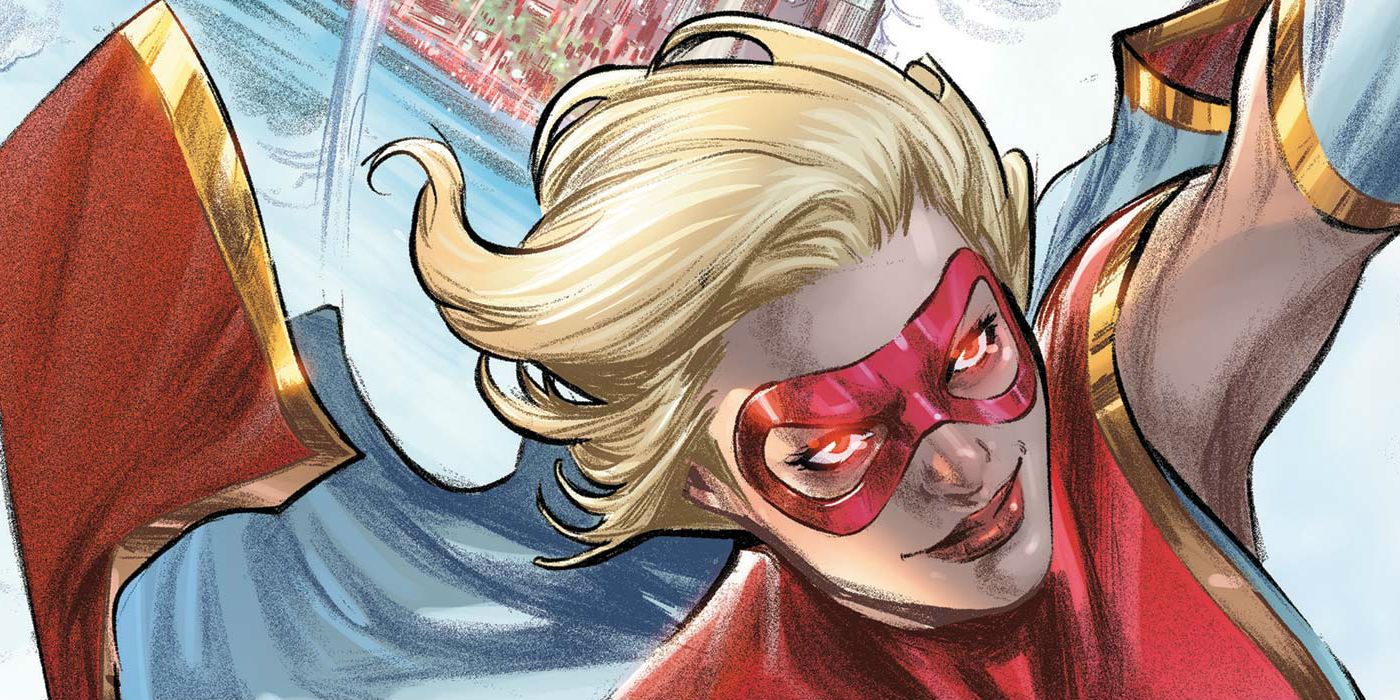 Things don’t look too good for Ripley Ryan in Star #1, by Kelly Thompson, Javier Pina, and Filipe Andrade. The superhero-turned-supervillain is still reeling from her fight with Captain Marvel, and the fallout that has cost Ripley everything. The one silver lining? She has somehow bonded with an Infinity Stone, and when Loki shows up to claim it, things quickly get out of hand.

Ryan Ripley first appeared in Captain Marvel #1 as a reporter interviewing Captain Marvel. Later, Ripley made a bargain with a Kree scientist to gain superpowers by siphoning them directly from Captain Marvel. This lead Ripley to become the superheroine Star, who rose in prominence just as Captain Marvel’s life was spinning out of control. Captain Marvel put a stop to Ripley’s schemes, but not before Star tried to take New York City’s life force to make her even stronger. Failing at this plot, Ripley was thrown in prison though she promptly escaped and has recently found the Reality Stone mysteriously bonded to her.

Related: Captain Marvel: 10 Things We Hope To See at the End of Her MCU Arc

The issue starts with Ripley Ryan stewing over her recent losses at Astoria, a bar for supervillains that disturbingly smells like ham and broken dreams. The bruising villain Titania picks a fight with Ripley, who is able to use the Reality Stone to withstand most of her punches, but the last blow sends her careening out of the bar. Abducted by a mysterious figure, she wakes up to find Loki trying to extract the Reality Stone from her body. When Star realizes even Loki is powerless against the stone, she uses it to make him “Go away. Permanently,” vaporizing Loki on the spot.

Loki appears unscratched after Star leaves, so apparently Star only killed a duplicate.Star goes to Jessica Jones for help, which turns out to be a bad idea since the private investigator is one of Captain Marvel’s closest friends. It’s here that Star painfully learns the limits of the Reality Stone. She tries to compel Jessica to help her find who is hunting her, and while it technically does work, Jessica Jones remains clear-headed – and uses the opportunity to thrash Star senseless. Star uses the stone to bring Jessica Jones down – only to be confronted by a superhero who knows a thing or two about bending reality – the Scarlet Witch, who tells her she is screwing up everything.

The issue does a good job building some sympathy for Ripley Ryan in spite of her previous actions. Her actions have cost her everything, but aside from her job, she didn’t seem to have much, to begin with, especially in terms of friends and family. It will be interesting to see if Star’s quest actually brings friends and mentors – whether hero or villain – or if the manipulative side of her personality seen thus far brings her back to old habits. Whatever the outcome, this is one Star that’s not burning out any time soon thanks to the Reality Stone.

Daniel Prude Was Killed by Rochester Police in March. Here’s How to Demand Justice.
THE OTHER LAMB / in cinemas & on MUBI 16 October / on DVD 26 October
Everything We Know About the Upcoming Gossip Girl Reboot
Film Review: Immortal (2019)
‘Marry Me’: Jennifer Lopez Romantic Comedy Sets Valentine’s Day Weekend Release