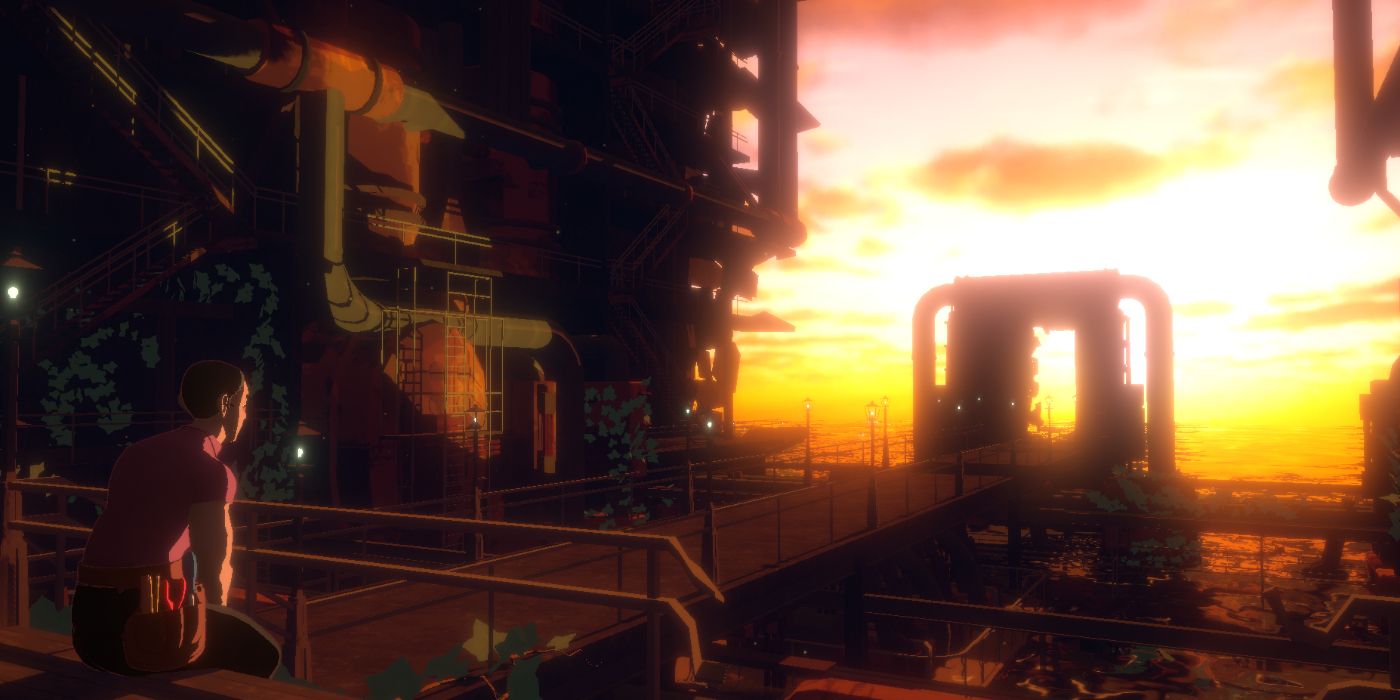 A café can be a sort of safe haven, an opportunity to cleave the day’s bustle with a reprieve or jolt all for a modest fee. The new visual novel game Necrobarista centers on The Terminal, a kind of liminal Euro-tinged bar and coffee shop for the newly departed. It’s an experience that wants its players’ attentive but inert, a visual novel diverting from some rigid tropes in the genre while also relentlessly servicing others. Although this is certainly a story worth telling and seeing through past the credits, some hiccups and an overall uneven pace keeps it from being as accessible and fluid as its stunning presentation might initially suggest.

The central character has to be Maddy, the blue-haired, well-meaning malcontent serving drinks and glares in equal measure. Assisting Maddy is her former boss Chay, spritely tinkering genius Ashley, and The Council’s authoritative presence, a portly grump who acts as kind of haunting antagonist. Newbie Kishan rounds off the major players, a perplexed customer who is the most obvious Stranger in a Strange Land archetype, and his gentle wide-eyed personality allows Necrobarista’s conversations to helpfully communicate the puzzling bureaucracies of death to both player and character.

Necrobarista truly dazzles, employing creative camera angles, subtle slow-mo, and dramatic lighting while commanding attention through each frame. Sweetening that deal is an attention-grabbing soundtrack which recalls the very best tracks of games like Shin Megami Tensei: Nocturne and Killer7, which is high praise. In short, sights and sounds in Necrobarista are an absolute treasure, and worth the price of admission alone.

It also seems like Necrobarista is a game that’s trying to do something different, and one way in which it breaks convention from many visual novel games is in the player role, where there isn’t a neutral moldable protagonist to inhabit or guide. This means that the game’s story and purpose is less concerned with giving players any distinct placement, granting the proceedings much more of a cinematic quality, which compromises a certain feeling of involvement. That means that there are no dialogue choices, no interactive romances, and very few decisions to make the story feel more like the player’s own.

What few decisions there are lie in Memories, side stories delivered in prose which can be engaged via interstitial FPS sections between Necrobarista’s straightforward chapters. Here players can wander through the café and highlight certain objects which lead to short interludes and lore-rich ephemera. These Memories contain some of the best yarns in the game, including a collection of product reviews on a ritual accessory, a fisherman’s account of his deadly profession, and Maddy’s favorite writer/necromancer responding to fan mail.

The game is delivered purely in text with no voice acting or audio, but there are highlighted words which can be clicked on for additional, usually snarky context. At the end of each chapter, players then select seven of these collected words, which become a kind of magical currency to unlock more available Memories. This whole process is incredibly convoluted, never explained in a mechanical or worldly manner, to the point where it’s functionally random while clearly meant to grant autonomy. In practice, this means that certain Memories can remain locked if the right words aren’t guessed at chapter’s end, which prevents access to premium story content for no sensible reason.

Necrobarista has wonderfully memorable moments in the game - a flirty encounter at the bar with a succubus and a bizarre techno-magical ritual are two which come to mind immediately - but there are also long sleepy lulls of conversation to endure, including pointedly unfunny puns, meandering bickering and banter, and a scheduled Greek chorus of robots at the end of each chapter. Becoming invested in certain characters does not agree with the firmly on-rails experience, and it’s doubtless that players will end up with characters they favor who lack adequate screen time. Part of this seems endemic to visual novel games, of course, but it’s made more frustrating when a certain Memory can’t be accessed about a favorite character just because players didn’t divine that the word “blowtorch” would link to “food.”

Necrobarista’s initial trailer is an example of the game operating at its peak. A seductive rock song with curious mysteries hinted at in visions, all clicking together with dynamite cinematography and an air of purpose. What players get in its full offering is a game of conversations and allusions, and an impressive number of those are distracted and much less amusing than they think they are. Yet there are other dialogues which are genuinely funny, bursting with character, or poignant and fittingly dramatic, and they are the ones that will keep players committed to see the story through to the end. Almost anyone smitten by Necrobarista’s style will find more than enough to warrant its asking price, including a rather poignant denouement after three hours of play, but it risks frustrating anyone expecting more of a game and less of a film.

Necrobarista is available now on Apple Arcade, with a PC/Steam release on July 22. A digital PC code was provided to Screen Rant for purposes of review.

Leonardo Faierman was born in Buenos Aires, raised in Queens, on the playground was where he planned most of his schemes. Since then he’s plowed a jagged path as a writer, editor, podcaster, comic creator, and mostly benevolent malcontent in New York City.

His favorite comic book is Love & Rockets, favorite film is Mad Max: Fury Road, favorite video game is Guardian Heroes, favorite book is The Thief’s Journal by Jean Genet. At the time of this writing, there is the distinct possibility that all or some of those have changed.

Leo’s 1/5th of the long-running podcast @BlackComicsChat, 1/2 of horror podcast @TheScreamSquad, film editor for the independent sci-fi monthly newsletter Narazu, and generally has words all over the interwebs, but they’re frequently gathered up on Twitter at @LeonardoEff — you can go yell at him there, if needed.