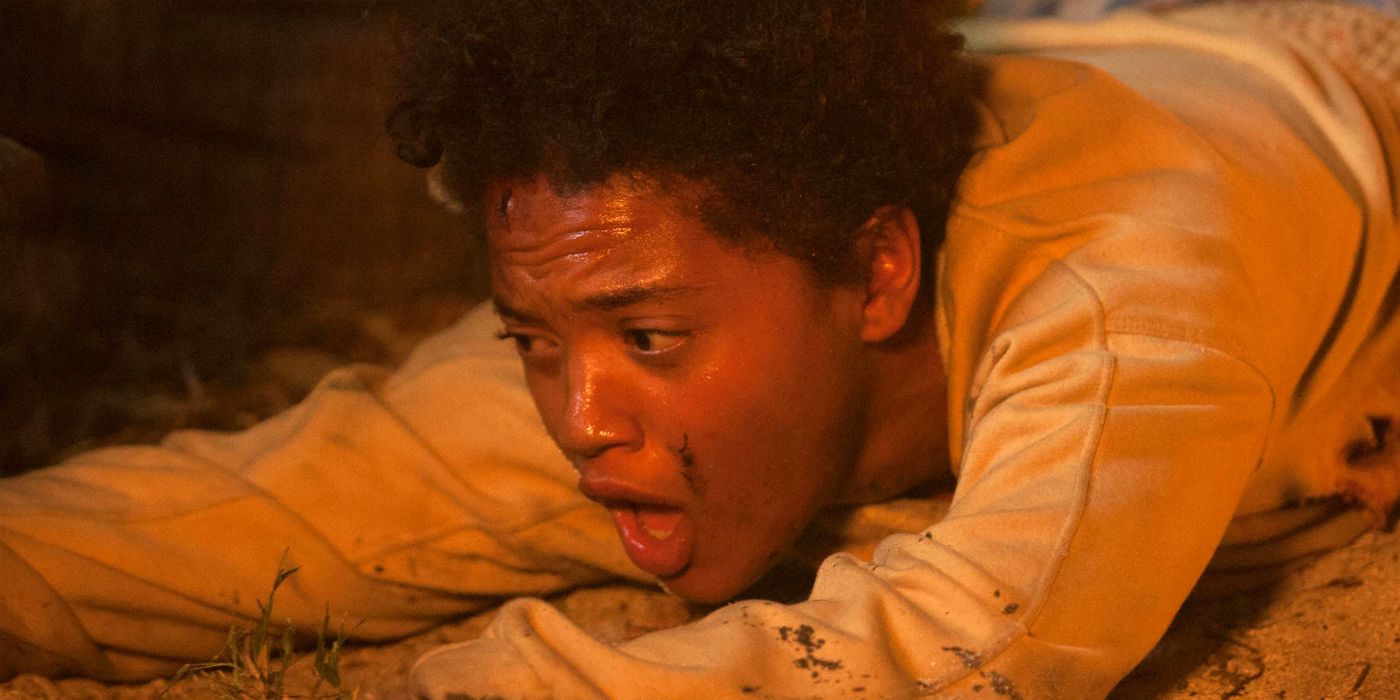 WARNING! Major spoilers for Sweetheart ahead.

Sweetheart, from Blumhouse Productions, released on Netflix December 25, 2019. The film, which was well-received at festivals like Fantastic Fest, is a harrowing tale of a young woman, Jenn (Kiersey Clemons), who becomes stranded on a desert island with a monster lurking just beyond the waves.

The sci-fi/horror creature feature does a lot with a little bit, relying more on setting and exquisite acting from its small cast of characters to create a setting of dread and hopelessness. Though details are vague in the beginning, more is discovered about Jenn’s circumstances as the film continues, exposing threats that aren’t solely related to the aquatic beast that is sizing her up as a prospective meal. Though she deals with the deaths of her traveling companions, Zack and Brad, relatively early in the film, she eventually is joined by her boyfriend Lucas (Emory Cohen) and his friend Mia (Hanna Mangan Lawrence) who make their way to the island on a small raft and tries to devise a plan to get them off the island to safety.

Jenn is forced to hone her survival skills, and managed to successfully hunt, fish, and gather to create a small camp from supplies she found which belonged to other people who occupied the island many years prior. This is hinted at from her finding Polaroid photos and an original Nintendo Gameboy amongst their belongings. During the day, she is self-sufficient, but at night she is stalked by a creature who seems to dwell, during the daytime, in a large hole in the bottom of the ocean floor. In true final girl style, she must eventually confront her fears and fight the creature if she ever stands a chance at freedom and rescue.

Does Jenn Get Off The Island In Sweetheart?

Jenn’s first attempt at escape is botched by Lucas and Mia, who insist there’s no danger, and state that they’re too tired of traveling after being lost at sea for many days. Jenn, who has experienced many nights with the creature, knows that they are wrong and decides to take the raft for herself. Mia and Lucas overpower her and knock her unconscious with an oar, then tie her to a tree until she’s given them reason to believe she’s not going to try to escape without them again; she wakes up at nightfall, which spurs an immediate panic, as she knows from experience that the creature hunts at night.

After the creature kills Mia, Lucas and Jenn decide to escape and head toward where Jenn saw planes flying, hopeful that it might lead them to civilization. It attacks the raft during the day from underwater, and pulls Jenn under. Jenn manages to escape its grasp before it takes her to the hole undersea where it lives, and Lucas comes to her rescue before being killed. As the now-ruined raft has limited Jenn’s options for survival and she is alone, she decides that fighting is the only way out of her situation.

The ending of Sweetheart is unclear as to whether Jenn makes it off the island, but odds are likely that such a massive blaze would have sparked attention from a plane. Timing would be somewhat relevant as the island is not massive, and by the end of the film, about a third of the island – from what could be seen – was on fire. Jenn wasn’t injured badly enough to require immediate medical attention in her fight with the creature, but as she has been on the island for a week at that point, she is likely dehydrated and in a weakened capacity, which could lead to an overall weakened condition to combat injury.

Sweetheart also is unclear regarding whether the creature Jenn has seen is the same in each instance; the hole in the bottom of the ocean appears massive, and there could be more than one. If there are multiple creatures, it is possible another would make its way to the island after noticing the flames. If there was another creature, it’s likely she wouldn’t survive.

The creature in Sweetheart is a unique monster that lives primarily in water, but can walk on land. In the beginning, it is shown through trees and other native greenery to the island. Once a better look is given, it’s clear that the creature is very tall – Jenn describes it as “taller than any man” she’s seen. It also is very strong, which it proves by being able to bat away grown humans like flies. One hit from the creature sends its enemies a good 15 to 20 feet away with a single blow. It appears to have claws on its feet – similar to dinosaurs – and has sharp claws on its hands as well, which can be used to puncture and slice.

When the creature attacks the raft, it shows a higher intelligence, as it strategically tests the base of the raft before cutting a hole in the bottom based on where the humans atop are situated. It seems to function well on land and underwater, but doesn’t appear on land during the day – at least, not in the scenes that were shown. It does, however, prove some level of activity during the day, which means it’s not fully nocturnal. The creature may also be somewhat sensitive to light, as proven in a scene where Jenn fires a flare over the water, and the creature immediately surfaces from the hole in the ocean floor where it presumably lives. Jenn manages to kill the creature with multiple stabs from a pocket knife and several sticks she has sharpened into spears; it also bleeds black, sticky blood.

The Real Meaning Behind Netflix’s Sweetheart

While Sweetheart is undoubtedly a creature feature, there are subtle messages of class division, misogyny, and white privilege in the scenes where Jenn interacts with Mia and Lucas. At first, Jenn is delighted to see them, but it quickly turns sour when she attempts to explain to them about the creature and neither one believes her. Jenn is shut down by Mia and Lucas, who refuse to leave the island, and Mia furthers the blow by gaslighting her when she insinuates Jenn has been driven mad by isolation and the “trauma” they’ve all endured. She is condescending and derisive when Jenn is only trying to save them. The situation becomes worse when Lucas tells her he “pays for her life” and taunts her with statements like “you have nowhere to go”, which implies he takes care of her financially, and she has limited resources otherwise.

Later, when she writes in her journal in case she doesn’t survive, she mentions that she didn’t know Zack or Brad’s last names, which implies she didn’t really know any of Lucas’ wealthy, privileged friends that well. Lucas tries to make Jenn feel guilty about their situation by telling her she always has a “black cloud” over her head, and implies that she should be more grateful and happy about the privileges afforded to her by dating him; this is a point of privilege as his statement seems to imply that she, a woman of color who lacks status, owes him a debt. After she tries to escape with their raft, neither Lucas or Mia show any guilt for tying her to a tree, even though she has repeatedly expressed that they’re all in danger. Their behavior toward her points to them seeing her as less of a person.

Because of this underlying message, there’s a more potent parallel made to Jenn’s capability and survival skills; she is a person who has likely undergone all sorts of struggles in her life. She is determined and savvy, doesn’t hesitate to fight back when threatened, and proves that she is able to make quick, difficult decisions under pressure. In some ways, the creature – though it is most certainly a physical threat and not just a metaphor – can represent adversity, as Jenn must continually devise new strategies to overcome a monster the others expect her to fight as if it’s her own cross to bear. Throughout the film, Jenn is shown as the only person making any efforts to better the situation, while the others lean on her. Blumhouse‘s Sweetheart is a meticulously layered film that does the creature feature genre justice and offers a breath of fresh air to Netflix as well as PG-13 horror in that it’s successfully scary and tells a good story.

Next: 10 Best Blumhouse Horror Movies (According To IMDB)

Halloween at Home with Dark Matter TV
Hear Emma Corrin Speak in Princess Diana’s Accent for The Crown for the First Time
Interview: Jessica Reynolds (The Curse of Audrey Earnshaw)
Card Sharks Season Premiere Exclusive: Will Evan’s Faith in Humanity Give Him the Advantage?
The Bachelorette Was So Awkward and We Have So Many Questions