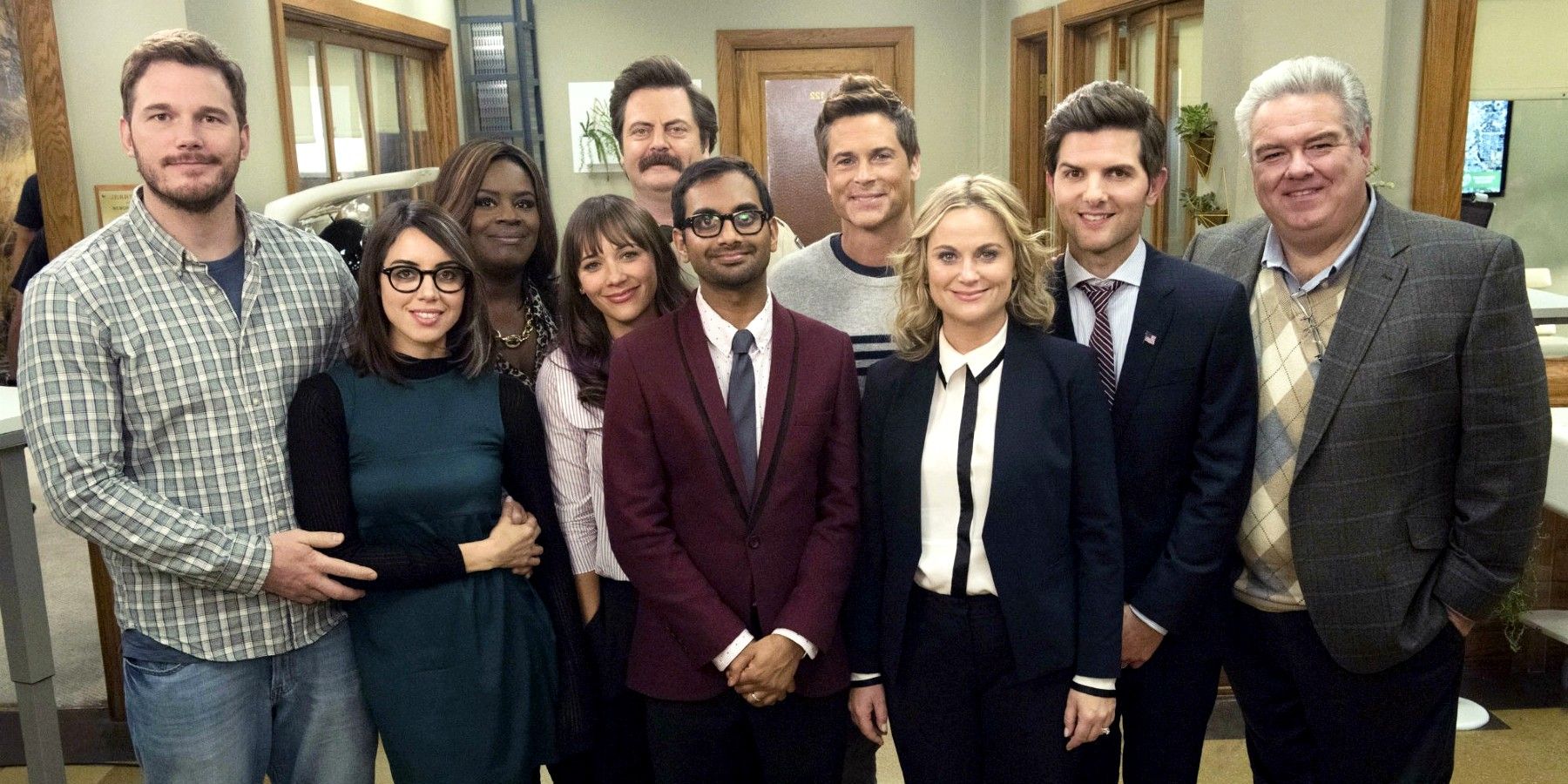 Parks & Recreation’s final episode included different time jumps so fans could get a glimpse at the characters’ lives in the future – and here are all the timelines that were shown. Created by Greg Daniels and Michael Schur, Parks & Recreation debuted on NBC in 2009 and came to an end in 2015 after seven seasons. The series followed eternal optimist Leslie Knope (Amy Poehler) and her friends and coworkers from the Parks and Recreation Department in the fictional town of Pawnee, Indiana.

The series had a rough start but it eventually found its own voice and built a solid fanbase. The final season decided to do things slightly different and skipped two years, reuniting viewers with the characters in 2017. The Parks & Recreation finale also included time jumps that helped the writers give full closure to each character, and the episode – appropriately titled “One Last Ride” – has been regarded as one of the best TV series finales in the last years.

Related: Parks & Rec’s Finale Had A Great Callback To The Pilot Episode

With some many futures it’s easy to get lost or forget where and what each character ended up doing. With that in mind, here’s every future timeline shown in the Parks & Recreation finale.

The episode begins in 2017 with the group inside the Parks Department, reminiscing their time together as some of them were ready to leave Pawnee. When a resident complains about a broken swing and asks to get it fixed, Leslie sees this as an opportunity for everyone to get together one last time to help Pawnee, and so the flash forwards showing the future of each character begin.

Craig is shown to continue working at Tom’s Bistro, where he meets Donna and Ron’s old hairdresser, Typhoon, and the two end up getting married. Tom is now married to Lucy and looks to expand his restaurant business, but fails and instead becomes a best-selling author and motivational speaker a few years later.

Andy wants to have kids, but April is reluctant. After seeking advice from Ben and Leslie, April decides she’s ready to have a family with Andy, and gives birth to a boy a year later. Meanwhile, Jean-Ralphio and his sister Mona Lisa fake their deaths to get insurance money, leave the country, and build a casino in Tajikistan – but being as loud as they have always been, they get caught. Somewhere else in Pawnee, Ron resigns from the Very Good Building Company and turns to Leslie for help, who makes him the superintendent of the Pawnee National Park, which ends up being his dream job. In 2023, Donna is shown to be living happily in Seattle with Joe (Keegan-Michael Key), and her real-estate firm to be very successful thanks to a resurgence in the housing market.

When Leslie and Ben are both approached about running for governor of Indiana, they head back to Pawnee in hopes that will help them with their decision. Once there, they stop by the Parks Department where the whole group and their respective kids have gathered to show them their support. It’s revealed that Ann and Chris had another kid and are returning to Pawnee, and April and Andy are expecting their second child. At the party, Ben announces that Leslie will be running for governor.

Leslie is shown to have become governor for two consecutive terms. She’s making a commencement speech at Indiana University, where they name the library after her… which is weird given the rivalry between the Parks Department and Pawnee’s library. There had to be some irony.

Leslie and Ben attend Garry’s funeral, who continued to be mayor of Pawnee for many, many years until his death at the age of 100. Leslie and Ben are surrounded by Secret Service members, implying that either Ben or Leslie became the President of the United States. And because Garry could never catch a break, not even when dead, his tombstone had his name misspelled. Many years into the future, Craig and Typhoon are seen celebrating their anniversary in an underwater cruise, where Jean-Ralphio’s future can also be seen.