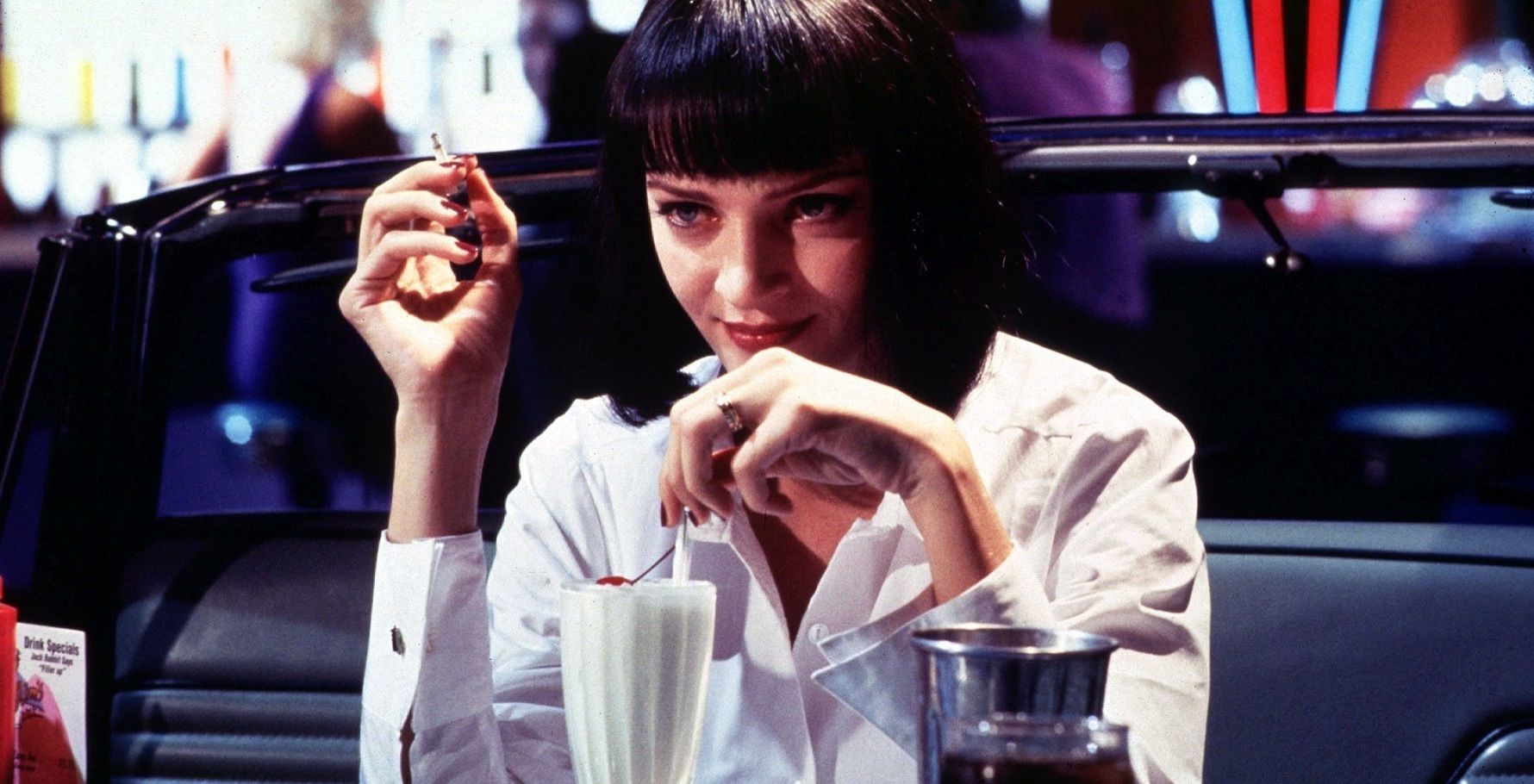 Quentin Tarantino and Uma Thurman will go down in film history as one of the greatest pairings of an actor and a director of all time. Their collaborations are limited to Pulp Fiction and both volumes of Kill Bill, but that was enough to solidify their lasting legacy.

In Pulp Fiction, Thurman’s character Mia Wallace subverted the trope of the mob wife from a million other crime stories by giving us an articulate drug addict who could both weave thought-provoking monologues and overdose on heroin, breathing new life into a stale and overdone stock character. Here are 10 Mia Wallace Quotes That Will Make You Think.

10 “That’s when you know you’ve found somebody really special: you can just shut the f*** up for a minute and comfortably share silence.”

There’s a lot of tension between Vincent Vega and Mia Wallace in Pulp Fiction. In a lesser movie, they would fall in love over the course of the night and kiss when Vincent dropped Mia off back at home at the end of their pseudo-date. But it’s not a lesser movie; it’s Pulp Fiction.

Instead of getting together, their connection is left unspoken, unless one counts Mia Wallace quotes like the one above. They know they have something pretty special, but they also know they’ll never be able to act on it. Mia will go on married to Marsellus and Vincent will go on without getting thrown out of a fourth-story window.

Some fans have pointed out that Mia Wallace actually draws a rectangle in the air and not a square, despite the fact that she’s telling Vincent not to be a square. But that just adds to the quirkiness of the moment. It’s odd for a Tarantino movie to add something over the frame like an animated square appearing at Uma Thurman’s fingertips, but for whatever reason, it works, leading to one of the better Mia Wallace quotes.

Pulp Fiction is an exercise in postmodernism, and so when something pops up to remind us that this is just a movie, it works. We’re not supposed to believe that this is real life. It’s a very cinematic experience.

8 “Three tomatoes are walking down the street…”

Thanks to Pulp Fiction, a lot of moviegoers are familiar with the TV production process. Mia Wallace explains that she once appeared in a TV pilot called Fox Force Five (a pilot being the first episode of a show that is used to determine if it’s worth making into a series).

Her character was supposed to tell a corny joke in every episode, but they only did one episode, so she only ever got to tell one joke, leading to an excellent Mia Wallace quote: “Three tomatoes are walking down the street: a papa tomato, a momma tomato, and a little baby tomato. Baby tomato starts lagging behind. Papa tomato gets angry, goes over to the baby tomato, and smushes him…and says, ‘Catch up.’”

7 “Trying to forget anything as intriguing as this would be an exercise in futility.”

RELATED: Where Are They Now? The Cast Of Pulp Fiction

She knows there’s a deep, dark secret to be told, and she won’t be able to let it go until she’s told what that is. We can all relate to this Mia Wallace quote, since we’ve all been in similar situations.

Pulp Fiction was controversial for a lot of things: its violence, its language, its subversions of genre conventions. One of those controversial elements was the drug use, but drug use is never glamorized by the movie. It’s shown to be very dangerous, since Mia Wallace overdoses on heroin and almost dies.

It’s also shown to be destructive, as Mia nips to the bathroom to “powder her nose,” which turns out to be a euphemism for taking cocaine, and one of the sadder Mia Wallace quotes. She can’t even get through dinner without taking a bump. The movie doesn’t make this look cool or hip – it’s a suitably cautionary tale.

5 “Don’t you just love it when you come back from the bathroom and find your food waiting for you?”

We can all relate to this Mia Wallace quote. We’ve all been in restaurants or diners and gone to the bathroom in the long, painful wait between ordering from the menu and actually having a plate of food placed in front of you, only to return to your table to find that the food has been delivered while you were gone.

It’s one of those everyday situations that is universally identifiable, yet is so mundane that it rarely gets a mention in movies and TV shows. Tarantino was reportedly heavily inspired by Seinfeld in the writing of Pulp Fiction, and the main influence was likely the characters’ conversations about nothing.

4 “If you’re all right, then say something.” “Something.”

One of the most thrilling and breathtaking sequences in Pulp Fiction is the one where Mia Wallace snorts some of Vincent’s heroin, mistaking it for cocaine, and starts to overdose. Vincent panics, because it’s his boss’ wife, and if she dies, he dies. So, he gets her into his car and rushes her over to his drug dealer Lance’s house to get her an adrenaline shot.

Tarantino was reportedly considering playing Lance himself, but settled for the role of Jimmie, because he realized he wanted to be behind the camera for the O.D. scene. When she awakens from the adrenaline shot, Lance says, “If you’re all right, then say something,” and Mia jokingly says, “Something.” There are few better Mia Wallace quotes.

3 “Uncomfortable silences. Why do we feel it’s necessary to yak about bulls*** in order to be comfortable?”

2 “The only thing Antoine ever touched of mine was my hand, when he shook it, at my wedding.”

The running storyline about why Marsellus threw Tony Rocky Horror from a fourth-floor window is an interesting one, and it doesn’t get fully explained. We get some vague ideas about it based on hearsay and not much else. Even Mia Wallace doesn’t have the full story. She just confirms that what Vincent heard about the foot rub, the rumor that made him terrified to take her out for dinner, is just a rumor.

She even points out that he should’ve been able to tell that from how unreasonable it sounds. The fact it’s never resolved, with Mia saying it’s between Marsellus and Tony Rocky Horror and them alone, adds to the mystique of the movie, and creates a memorable Mia Wallace quote.

1 “This doesn’t sound like the usual mindless, boring, getting-to-know-you chit-chat. This sounds like you have something to say.”

Mia Wallace’s defining characteristic is that she refuses to fall for all of society’s traps. Banal chit-chat is just a symptom of social convention and Mia realizes that and rejects it.

This is a common theme in Tarantino’s oeuvre, starting with the very first scene of his very first film in which the Reservoir Dogs gangsters are eating breakfast in a diner and Steve Buscemi’s Mr. Pink starts protesting automated tipping like he’s Larry David. When Mia realizes that something actually needs to be said, she’s excited, because it gives her a break from the mundanity of the social norms, and offers her a chance to make a Mia Wallace quote worthy of this list.