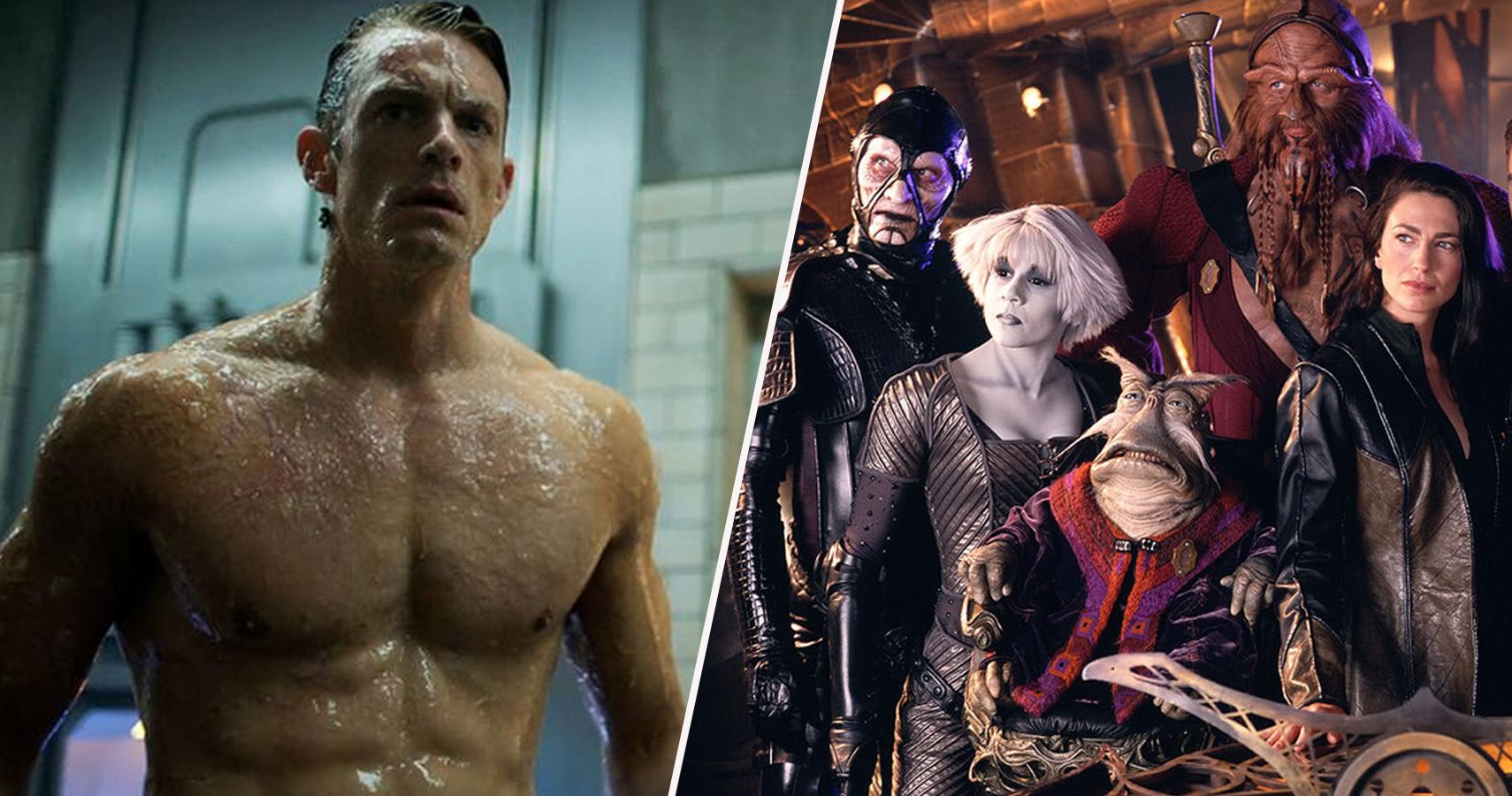 Cyberpunk has seen something of a resurgence in the last decade. Perhaps as our technology advances further toward the level commonly seen in sci-fi the issues raised by the genre are becoming more relevant to our everyday lives. Or maybe the glut of good sci-fi is just a result of enough stuff being thrown at the wall that some are bound to stick.

Whatever the reason, a new season of Altered Carbon has hit Netflix, and will no doubt whet the appetites of many for similar shows. Here are 10 that might hit the spot.

Updated on June 27th 2020, by Richard Keller: Altered Carbon is not the only show released in the last few decades with a cyberpunk/dystopian feel. Do a search on the numerous television networks and streaming services and you’ll find a gaggle of them to enjoy. Here are a few more shows to watch if you liked Altered Carbon.

When Babylon 5 premiered in 1993, some viewers didn’t think much of the space opera. In fact, they considered it a ripoff of Star Trek: Deep Space Nine, launched the same year. Things changed at the start of the second season.

This is when the concept developed by Douglas Netter and J. Michael Straczynski started to form. Soon, viewers were involved in a war with both Earth and the Shadows. Meanwhile, the station’s commander, John Sheridan, became a central part of both and a prophecized savior to the galaxy. By the time the fourth season ended, viewers were exhausted and pleased.

Consider Picard the dystopian view of Star Trek. The universe is not as shiny as previously shown. It’s filled with conspiracies at the highest levels, angry alien races bent on revenge, and a planet filled with Data-like constructs. The one person who keeps everything from unraveling is Jean-Luc Picard.

The show’s underlying theme concerns a dying man, Picard, who needs to make a final journey across the galaxy to correct a series of wrongs. He can’t rely on Starfleet to help him, so he gathers a crew together to get him to his destination. Along the way, he learns a good deal about himself and those around him. Oh, and he saves the universe. He is Picard, after all.

Time Trax was another sci-fi series that premiered at the same time of Bablyon 5. Though it had some success, it wasn’t as memorable as the latter program. Still, it’s one to watch if you miss Altered Carbon.

In 2193, police detective Darien Lambert is sent back two hundred years to retrieve 100 villains who escaped jail through a Trax time machine. Along with his A.I. Selma, Lambert scours the Earth to locate these fugitives. Sometimes they’re as normal as any late-20th century individual. Other times, they display enhancements to their normal abilities. Overall, Time Trax is a fine escapist show.

Mixing cyberpunk with steampunk, Farscape is one of those sci-fi programs with a devoted following. Applying an “out of their element” theme, the show focused around John Crichton, an astronaut who fell through a wormhole into a galaxy run by the authoritarian Peacekeepers.

Farscape wasn’t your average 90s sci-fi program. Produced by the Jim Henson Company, the show featured a darker side to the universe where there was no line between good and bad. Also, two of the show’s main characters were animatronic puppets who were not used as comic relief. Farscape is still popular enough that rumors of a follow-up movie have continued to spin around the internet.

Take the premise of Eureka — father and daughter become citizens of a strange town — move it to a dystopian time filled with aliens, and you have Defiance. The Syfy program definitely had a Western feel to it. The role of the main character, Josh Nolan, was to maintain order in a lawless city-state on the remains of St. Louis.

Part of his duty was to solve a mystery that connected his adopted alien daughter, Irisa, to a violent alien cult and buried spaceship. While he worked on this, Nolan needed to keep the two richest families in the town, one human and the other alien, from killing each other.

Anthology shows are another genre that has gotten pretty popular lately. With the opportunity to have every episode be a standalone tale, it allows multiple stories to be told seamlessly throughout a season. Black Mirror is an anthology series dedicated to telling audiences how much technology sucks.

Is that an overstatement? Perhaps. But most of the episodes take a very dark view of technology and its effects on society. For those who can’t get enough of dystopian science fiction, Black Mirror will provide plenty. Bring your antidepressants and enjoy.

Hailed by many as one of the best science fiction shows currently airing, The Expanse is an easy recommendation for fans of the genre. Beginning life on the SyFy channel, it ran for three seasons before being canceled and resurrected on Amazon. With a fifth season on the way, now is the perfect chance to catch up.

The show focuses on the crew of The Rocinante as they find themselves caught up in the escalating cold war between Earth, Mars, and the space-born Belters. Adding to the tension is the appearance of a dangerous alien substance that each side wants to use for its benefit.

When it comes to complaining about entertainment, sequels and remakes are always first in line for bashing. But when a remake is as good as HBO’s Westworld, even the critics have to admit that sometimes they hit the mark.

RELATED: Altered Carbon: 10 Times The Show Was Too Much To Handle

The story focuses on a futuristic amusement park set in the Wild West and populated by androids known as Hosts that are virtually indistinguishable from actual humans. Guests are invited to live out their fantasies in the park and to do as they please with the Hosts. As anyone with even a basic grasp of human nature might guess, this leads to a lot of awful things being visited upon the androids.

Speaking of remakes, this next series is currently on its third incarnation. Originally inspired by a book, The Swiss Family Robinson, Lost in Space originally aired for three seasons back in the sixties. From there it was adapted into a largely forgettable movie in 1998. Now a new show has aired two seasons so far on Netflix.

The series follows the Robinson family, a group of space explorers looking to colonize the Alpha Centauri star system. On the way there they encounter a hostile alien robot that sends them and the other colonists to a conveniently habitable world where they must struggle to survive.

Seth McFarlane is probably best known to most people as the guy responsible for filling out most of Fox’s Sunday night line up for many years. But the man is also an avid fan of science fiction, with a particular love of Star Trek. To that end, The Orville is a loving tribute/affectionate parody of the famous series.

Set on the titular ship, McFarlane stars as Shatner stand-in Captain Ed Mercer, a semi-washed up prodigy given one more chance at greatness. He and his crew proceed to get into all kinds of Trek inspired antics from there.

During the first half of the twenty-tens, the success of The Hunger Games inspired a flood of movies and television series based on Young Adult novels. The 100 was a part of this wave but has proven to possess the staying power to outlast the trend. The show will soon conclude with its seventh season, but there’s still time to catch up.

Set in a post-apocalypse brought on by nuclear war, a group of a hundred juvenile prisoners are sent from humanity’s last remnants in space to determine if the ravaged Earth is still habitable.

Like the previously mentioned Lost in Space, Doctor Who is another series that began life in the sixties. Unlike the previous show, Doctor Who ran for twenty-six seasons before going on a protracted hiatus. In 2005, the series was revived and is currently in its twelfth season.

The series follows the adventures of the eponymous Doctor and an ever-changing roster of companions as they travel through space in time. On their journey’s they encounter all manner of strange planets and hostile alien species. Don’t let the abundance of previous material deter you from taking the plunge on this series.

After the fiasco that was the network run of Firefly, Joss Whedon had publicly vowed to never work with 20th Century Fox again. But a few years later he had moved past his anger enough to work on a new series for the network. That series would, of course, be Dollhouse.

Eliza Dushku stars as Echo, a kind of human known as an Active who can be programmed with various skills and abilities to be hired out to wealthy clients. The series only lasted two seasons, which makes for a quick but satisfying watch.

Remember the ’80s? Stranger Things sure as hell does. This series is packed with so much nostalgia for the decade that it’s one pair of shoulder pads and a terrible haircut away from being a parody. But beneath that nostalgia is plenty of science fiction horror.

Set in the fictional town of Hawkins, Illinois, the story begins when a boy is abducted by a creature from another dimension. The attempts of his friends and family to find him will reveal a world of government conspiracies and wayward science experiments.

Another gem from the BBC, Orphan Black aired for five seasons, with a spin-off currently in development. It begins with a con artist witnessing a woman who looks exactly like her committing suicide. After assuming the dead woman’s identity, she learns that she is a clone, with numerous copies of her spread throughout the world. Eventually, she finds more clones, and the group goes on a quest to learn their origins.

From there, politics and conspiracies get involved, and the web becomes more tangled with every episode. Another mind-bending sci-fi series that will keep viewers guessing.


Next
Fresh Prince Of Bel Air: Which Character Are You Based On Your Zodiac?