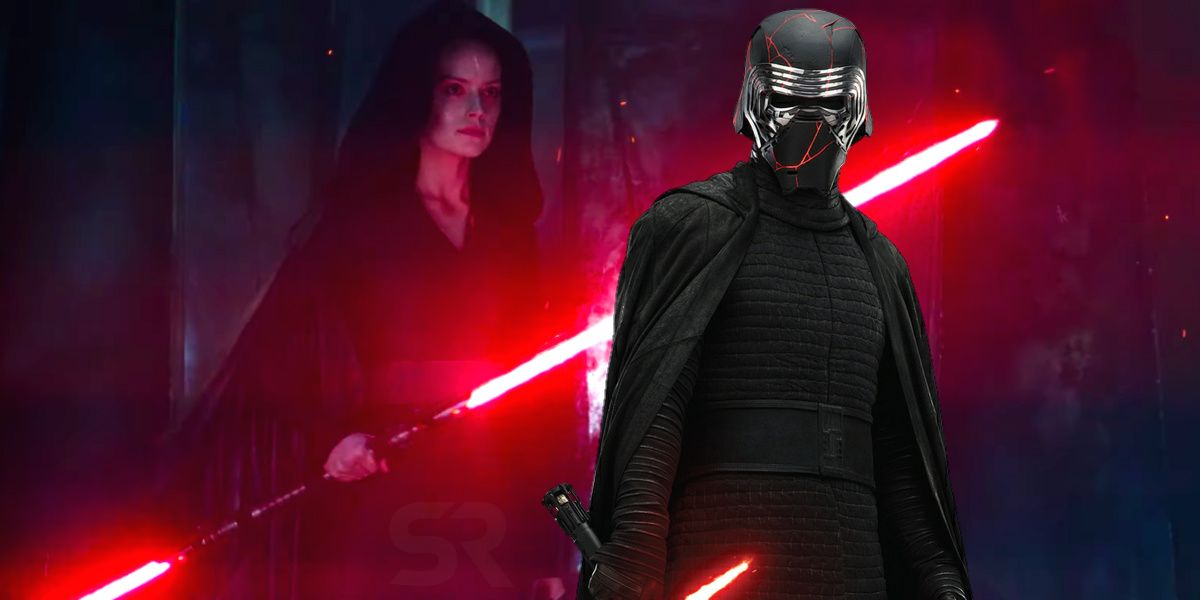 But while some of the Star Wars: the Rise of Skywalker trailers have leaned into the nostalgia inherent in the franchise’s legacy, since it’s become a worldwide phenomenon over the last 40 years, the promo videos have been careful to keep story details secret. Still, that first teaser did confirm the return of Emperor Palpatine (Ian McDiarmid) while a later trailer revealed Dark Rey, with Daisy Ridley dressed all in black like a Sith and wielding a double-bladed red lightsaber. The context for Dark Rey has not been confirmed, though many assume it to be a Force vision. Now, a new Rise of Skywalker TV spot teases more about the dark version of one of Star Wars‘ heroes.

In the new Star Wars: The Rise of Skywalker TV spot, titled “Forever,” the video features the same shot of Dark Rey with her double-bladed red lightsaber, but it quickly cuts to Kylo Ren preparing for a fight. Since the two are both in dark locations, the quick edit makes it look like they’re about to face off against each other. Check out the full TV spot below.

Of course, fans should know by know that events in Star Wars trailers aren’t always as they appear to be, and that may be the case here. It’s possible the shots of Dark Rey and Kylo Ren come from completely different scenes, and were simply spliced together to give the impression of the two characters facing off in a lightsaber battle. The Star Wars: The Rise of Skywalker trailers may not be lying, necessarily, but they’re no doubt trying to keep the movie’s secrets as best they can so fans will be able to watch the film without having been spoiled. As a result, even if Dark Rey and Kylo Ren do battle, there’s likely much more to the scene than seen here.

Even if this latest TV spot does offer more information about Dark Rey, the character is still a mystery for fans. It’s possible Rey turns to the dark side, though it still seems more likely the red lightsaber-wielding version is a Force vision – despite Ridley saying Dark Rey is real. Perhaps the battle with Kylo Ren is part of the vision, or perhaps Dark Rey never even meets Kylo. Although Rey and Kylo Ren will be key figures in The Rise of Skywalker, it remains to be seen how their stories play out on screen – and how Dark Rey factors in. Thankfully, fans will get to find out for themselves when Star Wars: The Rise of Skywalker releases in less than two weeks.

Molly Freeman is the lead news editor of Screen Rant and one of Screen Rant’s Rotten Tomatoes Tomatometer-approved movie critics. She’s been writing for Screen Rant since 2014 and has appeared on the Total Geekall podcast. Previously, she’s written entertainment news for Bustle and had personal essays published on HelloGiggles and Femsplain.

A graduate of Ithaca College’s Journalism program, Molly originally planned to be a music journalist before moving into entertainment journalism after spending so much of her downtime binge-watching all manner of movies and TV during her formative years. Still, she enjoys every chance to put her music and musical theater knowledge to good use, particularly when it intersects with her love of superhero movies.

Beyond that, Molly spends her free time reading young adult and romance novels, rooting for the New York Rangers hockey team (LGR!) and going out to brunch. Follow Molly on Twitter and Instagram @mollyrockit, or contact her directly: molly(at)screenrant(dot)com.