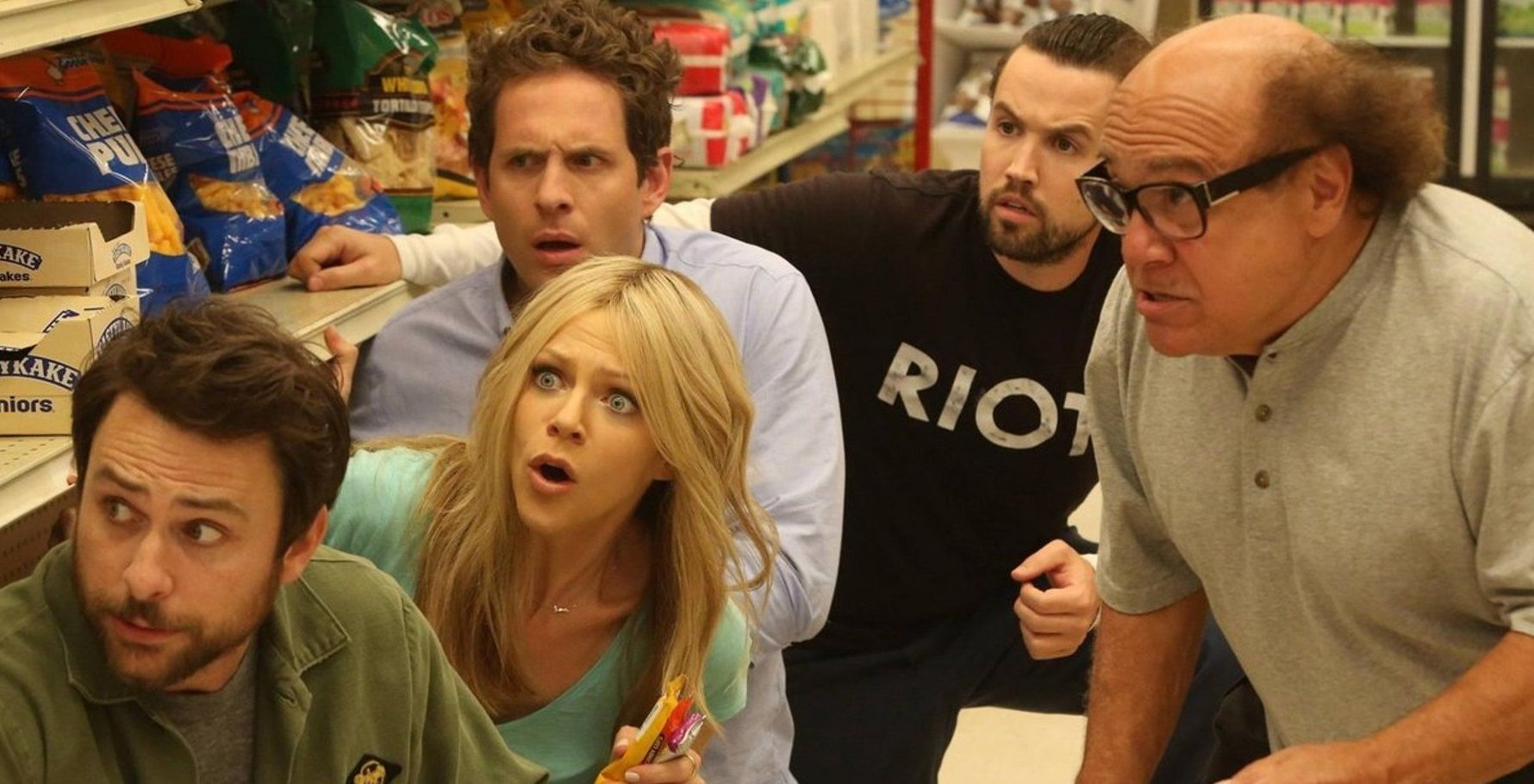 After many years, It’s Always Sunny in Philadelphia is finally beginning to be recognized for the brilliant show that it is. From its humble beginnings as a low-budget comedy trying to find its audience, the show is now considered one of the great modern television comedies.

It’s Always Sunny has managed to stay consistently hilarious over the course of thirteen season creating countless hilarious episodes. As good as the entire run has been, there are a handfuls of episodes that rise above the rest as proof of how good this show can be. Here are the very best episodes of It’s Always Sunny in Philadelphia.

Updated by Colin McCormick on March 31, 2020: It’s Always Sunny in Philadelphia wrapped up its fourteenth season a few months ago and still shows no signs of slowing down. The crude and hilarious antics of the gang at Paddy’s Pub are just what we need in these strange times. As we all hunker down, now seems like a great opportunity to revisit some of the show’s best episodes. There are plenty to choose from so we’ve updated out list with some more hilarious misadventures. Enjoy and stay safe out there!

The show has never shied away from dealing with the biggest issues of today in the most outrageous ways. So it’s no surprise they tackled the #MeToo movement with the same kind of insanity and hilarity.

The episode finds the gang attending a seminar on workplace harassment and inappropriate behavior. Of course, they derail the entire seminar with their own bad behavior and find themselves facing a lot of trouble. It’s a hilarious reminder of just how terrible each of these characters has been throughout the series.

14 The Gang Tries Desperately to Win an Award

Despite its record-breaking run on television and its countless fans, It’s Always Sunny has never really been recognized by the awards community. While the show doesn’t need accolades to be funny, this episode pokes fun at why this unconventional sitcom fails to connect with the mainstream.

The episode follows the gang as they try to rebrand Paddy’s Pub so it can win the award for the city’s best bar. The episode pokes fun at the so-called popular shows while also poking fun at themselves for being so weird and outrageous.

Throughout the series, Dennis Reynolds has devolved from a self-centered ladies’ man to a full-blown psychopath. His methods for seducing women have always been creepy, but this episode takes a peek at his true madness.

The D.E.N.N.I.S. System is a carefully planned strategy in which Dennis seduces women through lies, psychological torture, and manipulation. As disturbing as his methods are, it’s satisfying to see him fail so miserably as the rest of the gang attempts to develop their own take on the system.

An episode in which two characters fake their own deaths would seem pretty farfetched for just about any other show but it’s business as usual for It’s Always Sunny. Mac and Charlie decide to stage their epic deaths after Mac’s dad is released from prison and they suspect he’ll come for them.

From the idiotic way Mac and Charlie go about their plan to the rest of the gang’s unbothered reaction, it is a hilariously dark misadventure for the show.

Even a show like It’s Always Sunny can get in the holiday spirit with its own Christmas special. Of course, it is a much darker and more disturbing take on this festive time of year. As Charlie and Mac go about their annual traditions, they uncover so unpleasant secrets about their childhood Christmases. Meanwhile, Dennis and Dee try to teach Frank a lesson for his mean-spirited Christmas traditions.

The episode is especially vulgar and violent which feels appropriate for this show. There are some classic gags like Charlie’s bloody encounter with a mall Santa and Frank’s attempt to hide in a couch.

10 The Gang Goes To A Water Park

The Paddy’s Pub gang are so outrageous and generally terrible people, that putting them in just about any situation is going to be entertaining. This episode is a perfect example of that as a simple trip to the water park turns into one hilarious mishap after another.

Being surrounded by people in a family-friendly environment is a recipe for disaster with this group and the episode takes full advantage of the setting. From Mac and Dee getting stuck in the waterslide, to Frank going to extremes to cut the line, it’s a perfect adventure for the gang.

9 The Gang Hits The Road

Though we’ve seen the gang travel more in the later seasons, this episode was their first attempt to actually leave their beloved Philadelphia. It goes about as well as you would expect.

The episode is a perfect highlight of how the gang can’t help but get in their own way. They become so preoccupied with creating the perfect road trip that they prevent themselves from actually leaving town. The episode has some laugh-out-loud moments, such as the constant attempts to ditch Dee. And it all ends with a hilarious anti-climax.

The show has always pushed the envelope and, so far, has done so without going too far. To have a full episode surrounding the use of a homophobic slur was risky, but it managed to be both thoughtful and hilarious.

The show can achieve so much by just having these characters argue with each other. That’s pretty much all that this episode is about, as they try to determine to ownership of a lottery card. The episode is also noteworthy for concluding the long-running question of Mac’s sexuality, which continues to be an important part of the show going forward.

7 Mac & Dennis Move To The Suburbs

These characters are, thankfully, not normal people and they are not able to live like normal people. Whenever confronted with how the rest of society works, these characters usually begin to fall apart. This episode features maybe the most revealing proof of how messed up these people are.

Taking on a bet from Frank, Mac and Dennis move out to the suburbs to start a new life. Quite quickly, the change in environment begins to get to them and they both lose their minds in very dark ways. Who knew a nervous breakdown could be so fun?

6 The Gang Dines Out

The Paddy’s Pub gang is one of the most unique groups on television. Like most sitcom friends, they seem to spend all their time together and do everything together. However, unlike other groups, they also seem to have a lot of animosity for each other.

This episode finds the gang split in teams as they try to enjoy a special meal while at the same restaurant. What follows is a lot of tension, resentment, and mistreatment of waiters. It’s further proof that these people probably only hang out with each other because no one else will.

5 The Gang Buys a Boat

One of the smartest moves the show ever made was bringing in Danny DeVito as Frank Reynolds. Not only is DeVito a welcome addition to the cast who seems game for anything, but Frank’s enormous wealth allows the gang can do anything that pops into their minds.

This episode is another one of the simple premises out of which the show squeezes every potential for comedy. While Charlie’s ocean garbage collection and Dee’s new dance moves are hilarious, the episode’s highlight is Dennis’ very disturbing description of “the implication,” further cementing him as a true psychopath.

4 The Gang Solves the Gas Crisis

Part of what makes this show special is how it actively tries to be different from other shows. The brains behind It’s Always Sunny are very aware what other comedy shows are doing and always try to pervert those old tropes.

This episode explores the standard personalities that make up a regular pop culture group – the brains, the looks, the muscle, etc. The problem is none of these people really have any of these could qualities and thus they can’t accomplish anything. Extra points though for introducing Charlie as the “wild card.”

3 Sweet Dee Has a Heart Attack

Some of the greatest episodes of the show present a typical, relatable issue and then show how badly the gang can screw it up in their own ways. In this episode, the gang seek a healthier lifestyle and, obviously, fail.

Dennis and Dee try to achieve perfection in the easiest way possible. Frank is put in a mental institute, in an homage to DeVito’s role in One Flew Over the Cuckoo’s Nest. But the highlight is Mac and Charlie seeking health insurance by getting a mailroom job. This leads to the meme-worthy moment where Charlie tries to unwrap a vast conspiracy that is all in his simple mind.

Charlie Kelly is one of television’s strangest characters. He is an anger-prone, illiterate adult who should be dead from all the glue-huffing and paint-drinking. And yet, this episode shows that there might be a little more going on inside Charlie’s mind.

As they prepare for a visit from the health inspector, Charlie tries desperately to get the pub and the gang ready. Shot like a single take, the episode is filled with energy and fun as Charlie does what he does best. And the slow-burn gag with the barstool is just icing on the cake.

It’s Always Sunny is one of those great shows that reward loyal viewership. For the Season 4 finale, the show took a small but memorable gag from Season 3 and created a musical episode around it, and it was wonderful.

In an attempt to finally woo his crush, Charlie puts on this elaborate, nonsensical and accidentally obscene stage production. The episode is funny enough just watching the gang try to wrap their heads around the absurdity of Charlie’s musical. Add to that the fact that the songs are actually pretty entertaining. It further proved that this show could do anything.

NEXT: 10 Shows To Watch If You Like It’s Always Sunny In Philadelphia

Next
Which Friends Character Are You Based On Your Zodiac?

A writer and film fan. I always enjoy keeping up with the latest films in theaters as well as discovering some hidden gems I may have overlooked. Glad to be a part of Screen Rant’s positive and fun community and have the opportunity to share my thoughts with you.