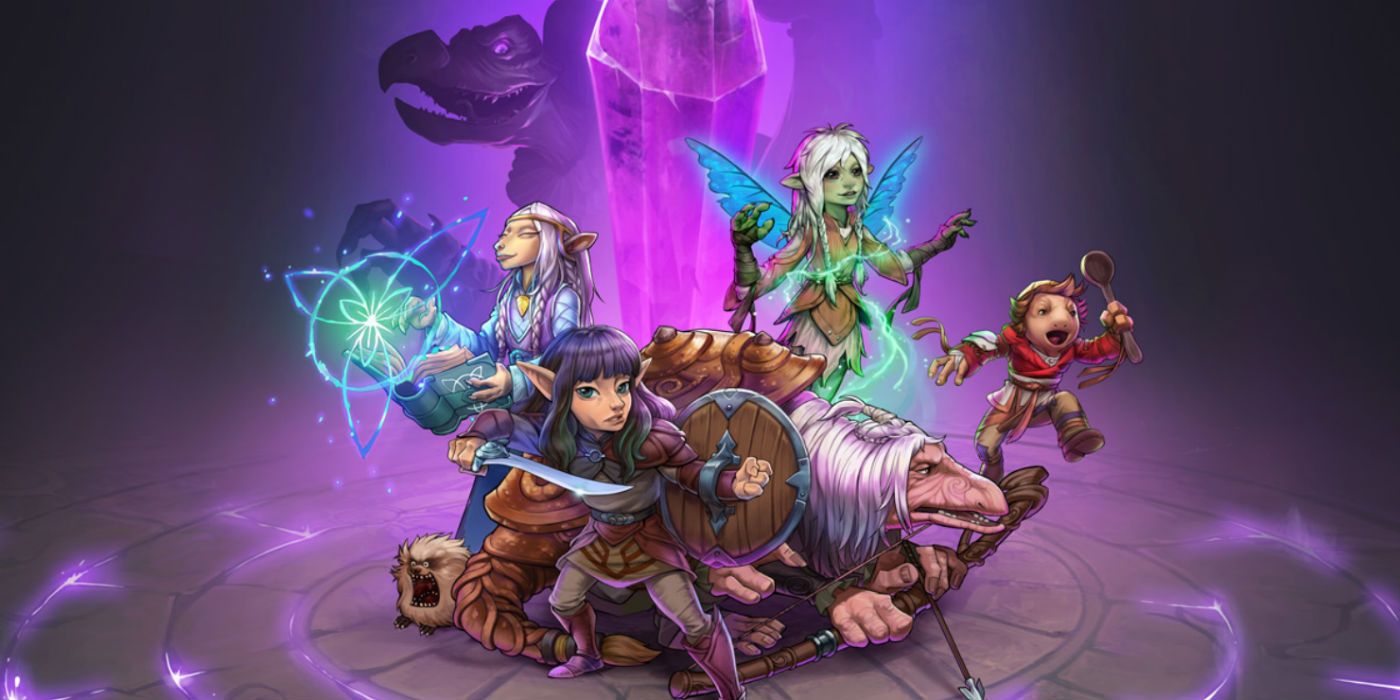 The Dark Crystal: Age of Resistance Tactics is a game that works really well as companion to the Netflix series, but as such, the world of Thra, its creatures, and what’s happening will likely be confusing to those unfamiliar with The Dark Crystal. The game’s narrative is largely a retelling of the second half of Age of Resistance season 1, with a few extra scenes included throughout to allow for more varied levels and enemies. As a story adaptation, Tactics is good but not great, and it certainly isn’t the recommended way to first experience The Dark Crystal‘s story. The cut scenes are more like comic panels, and while they are fine illustrations, they are a stark departure from the stunning sets and puppetry of the show. Nor are they very evocative of artist Brian Froud’s style, which considering how fundamental his work is to The Dark Crystal, would have been a smart choice. It also feels like a missed opportunity to not to include any of Age of Resistance‘s wonderful voice acting, even in a limited capacity. Tactics does, however, do a much better job at translating the look of The Dark Crystal with its character models, menus, and game levels. Plus, the writing is really strong, so even though characters don’t actually speak, it’s easy to imagine them saying the lines.

As its name so clearly indicates, The Dark Crystal: Age of Resistance Tactics is a tactical strategy game where players will guide a team of characters around a grid, battling enemies and avoiding environmental hazards in turn-based gameplay. In this sense, it’s similar to the Fire Emblem series or the recent indie game, Wargroove. As players progress through the story they gain more heroes – which for Dark Crystal: Age of Resistance, means main characters like Rian, Brea, Deet, and Hup. You will also collect various Gelfling from the different clans – Drenchen, Spriton, Douson, etc. – and all come with unique abilities. For example, Drenchen are resistant to poison. Completing story missions as well as repeatable encounters will level heroes, unlocking new abilities and points in a surprisingly robust job system, and earn pearls, the in-game currency that is spent to purchase new weapons, armor, and trinkets.

The Dark Crystal: Age of Resistance Tactics can be as challenging and involved as a player prefers, with three difficulty settings and a New Game+ mode that becomes available after beating the game for an even more challenging experience. Playing through the levels themselves is pretty straightforward for anyone familiar with grid-based strategy games, but even for inexperienced players, Tactics explains the basics clearly. It also does a good job at reminding players early on to be regularly checking their party’s abilities and gear, creating the habit of updating them before it becomes absolutely necessary for winning battles at the higher levels. Yet, while Tactics makes itself accessible to players new to the genre, that does not mean its battles are complete cake walks. Battles reward players for their patience and should be treated like a chess match, thinking a few moves ahead and always keeping track of when their heroes – but especially the enemies – will go next.

It’s in these battles (of which Tactics boasts 50 unique missions in addition to aforementioned New Game+ mode) that Tactics is best at recreating the experience of The Dark Crystal: Age of Resistance. Every Gelfing – or Podling or Fizzgig, given your party configuration – has a role or situation they’re best suited for, be it because of their job, stats, or abilities. Enemies will also come with a variety of attacks and abilities that are accurately translated from the show. For example, Armorlings have a high defense and can even increase it with a buff. It’s with the Skeksis, though, that Tactics really nails it, making them tough, challenging bosses who are best avoided until all other enemies are defeated and a player can focus their team solely on them. Just like in the show, it requires several Gelfing and their allies to defeat a Skeksis.

The Dark Crystal: Age of Resistance Tactics is very much a game made for fans of the Netflix series, so it’s a shame its release is coming months after the show first premiered. While it’s likely Tactics is overall a better game because of the delay, it’s hard to ignore the fact that releasing more closely to the show would have been beneficial. Still, fans desperately searching for any news about Age of Resistance season 2 will hopefully be momentarily satisfied with what Tactics has to offer. For a TV show tie-in game, it’s remarkably well-crafted, and at only a $19.99 price point, it has quite a bit to do. The Dark Crystal: Age of Resistance Tactics is a surprisingly solid strategy game that’s accessible for newcomers but still challenging, and it uses its source material to create an experience Dark Crystal fans will enjoy.

The Dark Crystal: Age of Resistance Tactics is available for PlayStation 4, Nintendo Switch, Xbox One, and PC/Mac. A Switch download code was provided to Screen Rant for purposes of review.

4 out of 5 (Excellent)
Kentucky Route Zero Review: A Landmark in Video Game Storytelling
Related Topics
advertising
About The Author

Sarah Moran has been a Screen Rant contributor since 2014. She primarily writes reviews and features in addition to covering the ongoing development of current movies and television shows. Sarah is a graduate of The Ohio State University where she earned her B.A. in Film Studies in 2009. Her most recent assignments for Screen Rant include (but are not limited to): The Flash, Star Wars Rebels, The Walking Dead, and Game of Thrones.

Sarah is also the Editor-in-Chief of Kabooooom.com, a website devoted to reviewing, ranting, and raving about comic books and all they inspire. When she’s not trying to transform her rambling thoughts into written words, Sarah can be found playing SMITE, catching up on her pull list, or escaping through travel documentaries on Netflix. For more of Sarah’s exploits, give her a follow on Twitter.