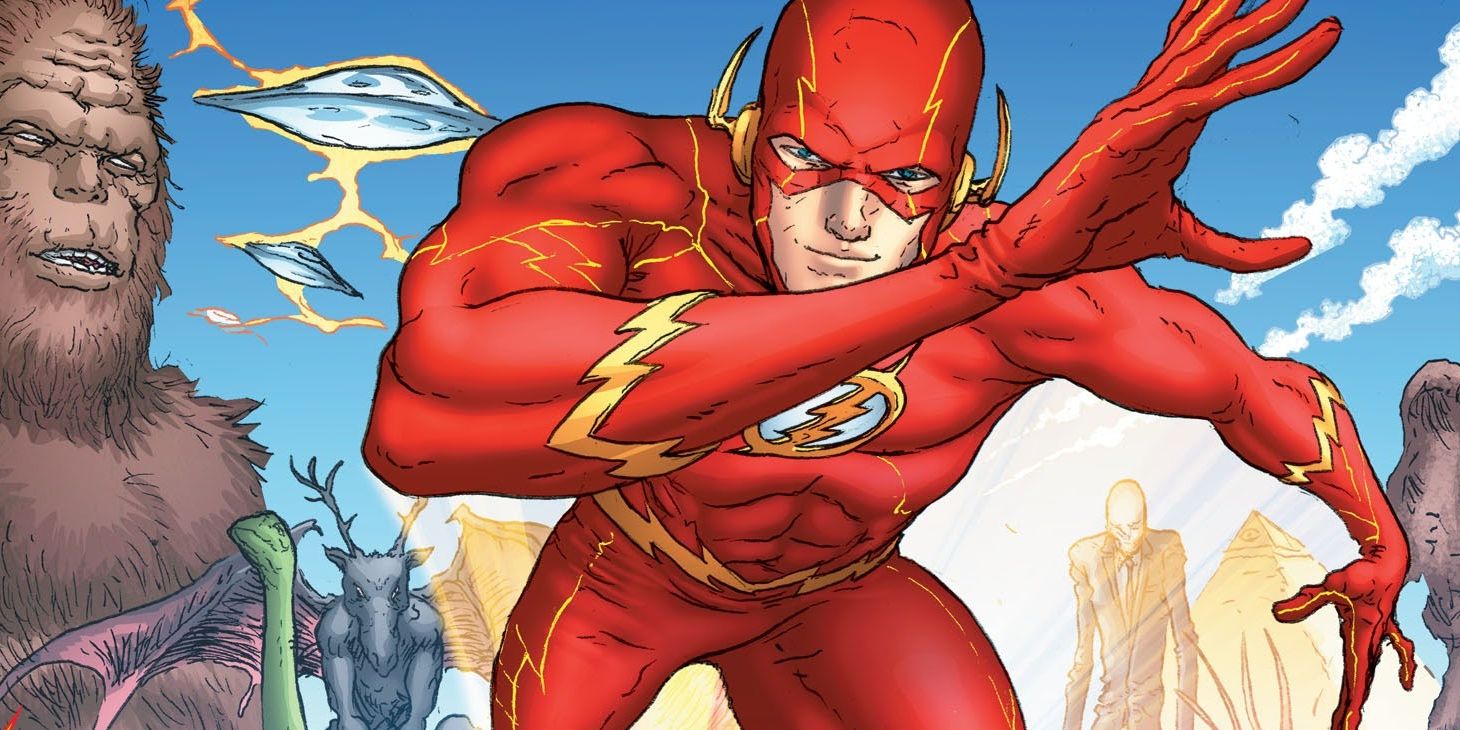 Warning: Spoilers ahead for The Flash: Fastest Man Alive #6

As The Flash, Barry Allen is the Fastest Man Alive thanks to his powers of super-speed. He’s also pretty smart too, having a day job as a forensic scientist. However, what happens to Barry’s intelligence when he’s faced with several events that cause him to have doubts about everything he thought was real and true? Multiple large conspiracy theories seem to be proven real and true right in front of Barry eyes in The Flash: Fastest Man Alive #6 . Has Barry become so fast that he’s become aware that animals do talk behind our backs, or that Slenderman is indeed real? Or is there something else afoot beyond Bigfoot?

In the issue, Barry Allen is excited to go to an event celebrating the 50th anniversary of the NASA Apollo missions. Before he gets there, he does save a girl from a downed power line, just doing his job as the Scarlet Speedster. However, upon making it to the celebration, Barry is astonished to hear one of the retired astronauts say that the entire moon landing was fake and filmed using a green screen, as many wild theorists on the internet have proposed.

Barry struggles to believe that to be the actual truth, as it’s incredibly contrary to what scientific mind has learned and known. Even so, he feels as though he has to confirm the truth with his friend Hal Jordan, a Green Lantern and space-faring hero. On his way to see Hal, Barry is shocked to hear a group of barnyard animals talking with one another, who then ask Barry to not narc on them to other humans. Thinking he might be going crazy, The Flash decides to go on a long run over the ocean to clear his head, which causes him to almost run off the edge of the world, as it’s revealed to be flat, just like the Flat Earth conspiracists say.

At this point in The Flash: Fastest Man Alive #6, Barry knows that something is seriously wrong, and that there couldn’t possibly be this many things he once thought of as myth and conspiracy to be somehow proven true without him knowing. He realizes something more must be a play. Barry then remembers the girl he saved, and that her name was Ruse. Due to the fact that “ruse” is another word for “trick”, Barry gets a pretty good idea of whose behind all the crazy and inexplicable events he’s seeing: Axel Walker, The Trickster. Barry figures out that when he saved the girl, really an automaton, it injected him with nanites that made him see whatever Trickster wanted him to see when he used his super-speed. For example: a bunch of conspiracy theories seemingly being proven as fact in order to truly mess with The Flash’s head.

After determining Trickster’s location, the Flash speeds off to take him into custody, this time ignoring what appears in front of him such as the existence of Bigfoot, the sinister Slenderman, or aliens building the pyramids. Once finding Trickster, Axel reveals that while the old Trickster Jesse James used toy bombs and puzzles, Axel wanted to be more modern and mess with Barry’s psyche courtesy of the nanites. Barry actually commends Axel’s creativity, which is great example of their relationship. Trickster is fairly tame compared to most rogues and villains in the DC Universe, so The Flash has a sort of friendly rapport with the foe as seen here while taking him into custody.

It’s fairly similar to Trickster’s appearance in the animated Justice League series, where after having a civil conversation to get information at a bar, Flash leaves Trickster and simply tells him to turn himself in once he’s finished with his drink, and Trickster actually complies. It’s a pretty funny relationship, and this issue is another great chapter of their ongoing development.

More: The FLASH Saved The ENTIRE Justice League In The BLINK OF AN EYE

Which 90 Day Fiancé: Before the 90 Days Star Leaked Tell-All Footage?
Related Topics
About The Author

Kevin Erdmann is one of Screen Rant’s staff writers. With a major in Cinema Studies and a minor in Comics and Cartoon Studies from the UofO, Kevin is pretty sure he’s writing for the right site. While Kevin is a huge Marvel fan, he also loves Batman because he’s Batman and is a firm believer that Han shot first. Disney also shares a big part of his fan patronage. Previously, Kevin was a writer for ComicsVerse.com. Kevin lives in Oregon with his wonderful wife and sinister cat who is no doubt currently plotting his demise.