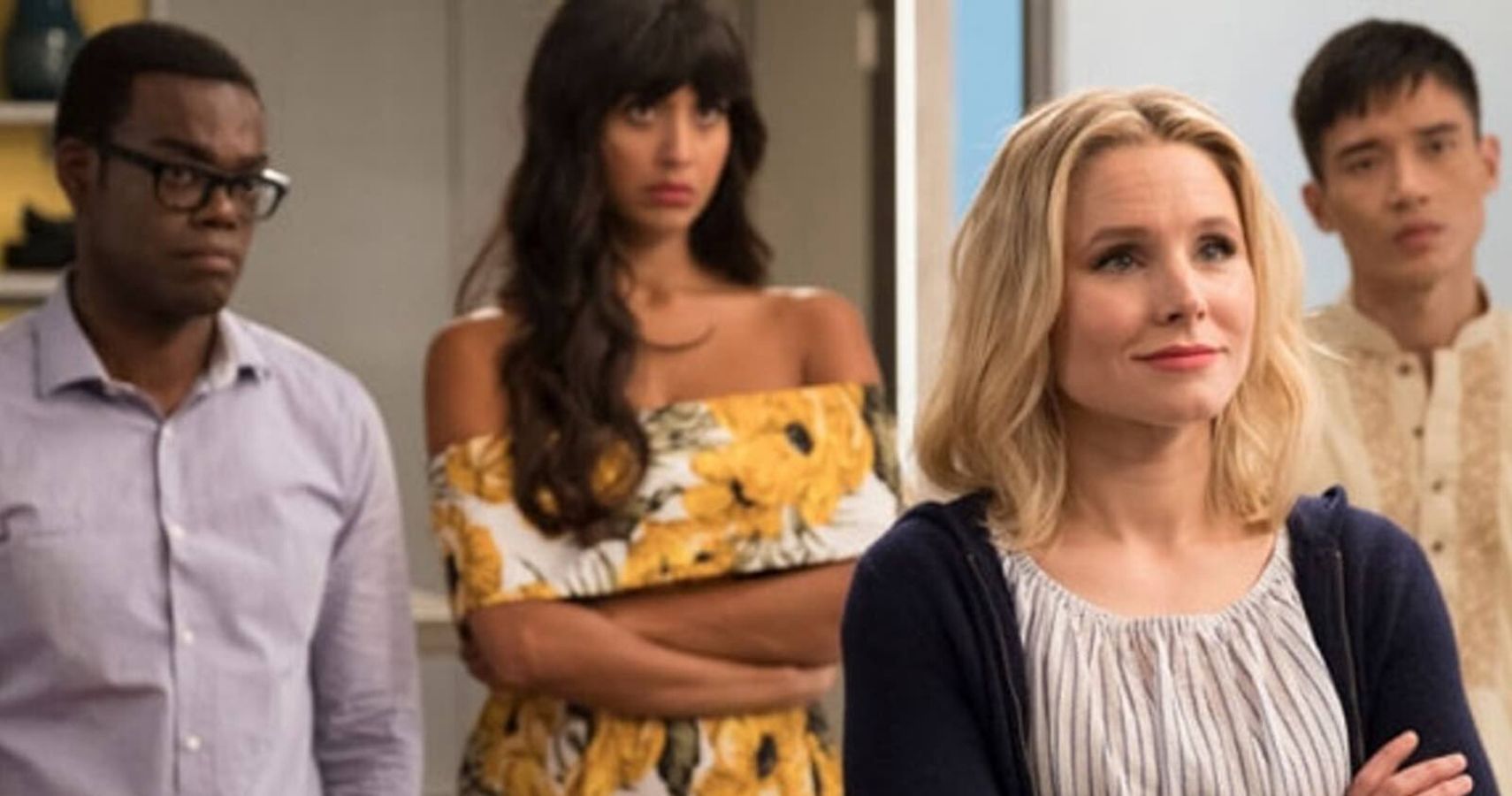 In the four seasons of The Good Place audiences have gotten a taste of what the afterlife is like, but what keeps fans coming back for is the characters that you can’t help but root for.

Somehow the show brings a girl from Arizona, a demon who’s had a change of heart, a Jacksonville “pre-successful” DJ, a name dropping English socialite, a Nigerian philosophy professor and an all-knowing being named Janet together to form “Team Cockroach.” As the final season of this quirky sitcom comes to a close, here are 10 Hidden Details About the main characters.

In the third episode of the pilot season, in a conversation with Eleanor, Tahani tells her that her name, Tahani Al-Jamil, literally translates to “Congratulations Beautiful,” from Arabic. From the get-go, the audience knew that Tahani was fed a silver spoon her whole life, but the fact that her name is a compliment puts things into perspective. When Eleanor just repeats the translation saying, “Congratulations Beautiful,” Tahani replies with, “Thanks, Eleanor. You big flirt.” With that in mind, knowing that her name is literal praise is the cherry on top.

9 Jason was Born in a Public Pool

The apple doesn’t fall far from the tree, in this case. In one of the most recent episodes, “The Funeral to End All Funerals” audiences find out that in Jacksonville people have their funeral in the same place where they were born. Jason’s mom went into labor because she did a cannonball at nine months pregnant. Knowing that now, and how his father “Donkey Doug” acts, it’s no surprise that Jason ended up the way he is.

8 No One has Seen Michael Outside of his Skinsuit

After four seasons it’s easy to forget that Michael is a demon and doesn’t look like his skinsuit. In reality, Michael is a “6,000-foot tall fire squid,” which sounds both horrifying and intriguing. Regardless the audience has never seen him in his true form because only he can take the skinsuit off of himself. At this point in the series he has not revealed his true form, but there is still time before the series ends to see fully demon Michael. The real tough question is do we want to?

As an all-knowing being, it’s shocking to know that the “life” form that is Janet could become more advanced. Over time Janet has advanced after 827 reboots. One thing that no one anticipated to happen is that Janet would (or possibly even could) develop feelings, let alone for someone as unpredictable and frankly childish as Jason. Despite the continuous reboots overtime, Janet developing emotions may have been one of the best things that happened to Team Cockroach. With this advancement, she now understands the humans a little more and can, in the end, serve them better because of it.

Unlike her pal Jason, Eleanor surprisingly has not committed a major crime. She mainly made it into the bad place for her overall negative attitude, snarky comments, and selfish behavior. This is interesting considering the fact the Eleanor was considered the worst of the four.

RELATED: The Worst Thing Each Main Character From The Good Place Has Done

This may be because the characters had skewed motivations, were over-analytical, and just plain reckless. Eleanor was just mean to others knowingly. Despite this toxic behavior being the foundation for our favorite “Arizona dirtbag,” Eleanor improved the most because, in the end, she knew her actions were bad.

Chidi mentions in the first episode of the series that his native language is French. This fact was relayed early on but is often overlooked because from the audience’s perspective everyone speaks English in “The Good Place.” From Chidi’s perspective, everyone he interacts with is speaking French, as is he. But he must be bilingual seeing that in season 3 he does a TedTalk like speech in English and when the other humans join him in Sydney to better themselves, they all continue to communicate in English.

As audiences know Janet is not a girl, as she continuously reminds us and Jason, but she is also not a robot. Janet is, in her own words, an “anthropomorphized vessel of knowledge.” Despite looking like a human, when it comes to basic functions Janet runs like a machine. To activate a Janet you have to press its nose for three seconds. On the other hand, when it comes to rebooting, all someone has to do is press another button. But one thing that Janet has is human-like defenses, like guilt and terror, to try and keep others from rebooting her.

When audiences were first introduced to Jason, he was known as Jianyu Li, a Taiwanese monk. As time goes on Jason’s true identity is revealed and can express himself as the rowdy, spontaneous and often dangerous person he truly is. In the current season to win back Janet, Jason turns to Michael for advice regarding his over the top ideas. In an attempt to help him not make things worse, Michael reveals that the reason he chose a monk as Jason’s personal form of torture is that it goes against his wild and rambunctious instincts. The fact that his given monk name translates to “prison” or “jail” brings things full circle.

In a season four episode, we see a young Chidi hearing his parents arguing late at night. In the consistent Chidi fashion, what does he turn to?…philosophy. As a result of this, he makes a 55-minute lecture to his parents about why they should not get a divorce.

This results in his parents staying together, leading him to believe that there is an answer to every question that is asked.  In a way, this was the beginning of his obsessive nature that got him where he is today.

Throughout the series, it has been mentioned that Tahani studied at the Sorbonne in Paris, France, after she graduated from Oxford. Around the same time, Chidi was teaching at the Sorbonne. Whether or not Tahani took his class, or they knew of each other is unknown. But it is quite possible that our favorite socialite and philosophy enthusiast crossed paths with one another before they met in the afterlife.

NEXT: The Good Place: 10 Things That Need To Happen Before It Ends

Next
How I Met Your Mother: Main Characters Ranked By Intelligence