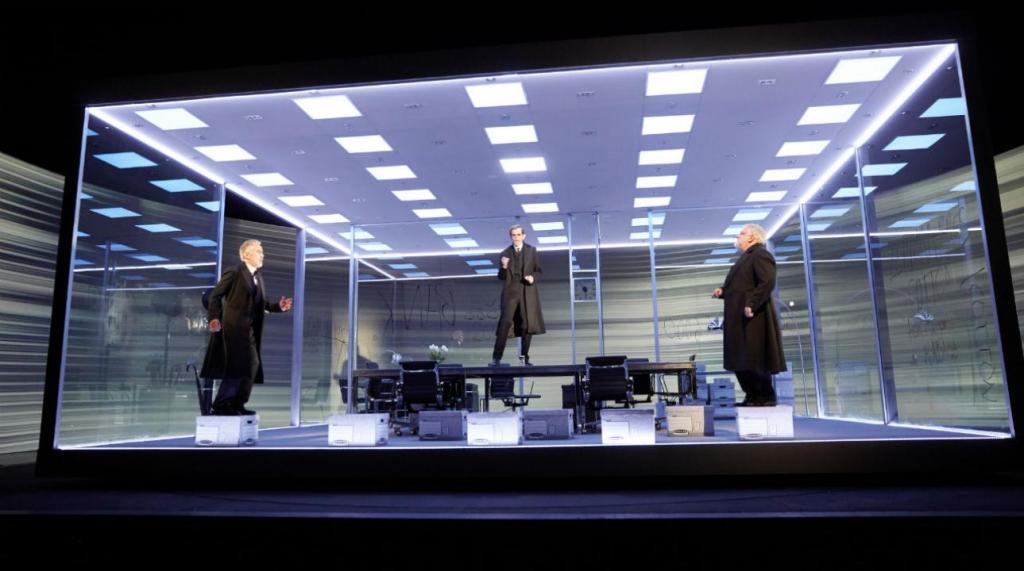 The reopening announcement was made by producers National Theatre and Neal Street Productions, a team that apparently no longer includes Scott Rudin or his previously announced partners Barry Diller and David Geffen. The Rudin-Diller-Geffen trio were not credited in today’s announcement.

Outside of The Music Man starring Hugh Jackman, The Lehman Trilogy is the first of the Broadway productions formerly headed by Rudin to announce its reopening since the producer announced his “step back” in April amid accusations of workplace harassment and bullying. (The Rudin-Diller-Geffen trio are no longer credited as lead producers of Shubert Organization’s The Music Man.)

The reopened production – a limited, 14-week engagement – will be directed by Academy Award and Tony Award winner Sam Mendes and star original cast members Simon Russell Beale and Adam Godley, with Adrian Lester joining the cast in his Broadway debut. Lester will take over the role of Emanuel Lehman, originally played by actor Ben Miles.

Lester’s casting reunites the actor with director Mendes 25 years after they teamed up on a London production of the musical Company.

“It couldn’t be more perfect that Adrian Lester will be joining our production of The Lehman Trilogy on Broadway,” said Mendes. “He was the first person I offered the role to, way back when we first mounted the production in London at the National Theatre, so on some level it feels like destiny.”

Said Lester, In a statement, “Years after Sam and I first discussed my involvement in this incredible project, I am now so pleased the ups and downs of actors’ availabilities has finally offered me the chance to be a part of this fantastic production. The Lehman Trilogy asks a lot of the three actors. I’m very excited and really looking forward to starting rehearsals.”

Lester’s other stage credits include Six Degrees of Separation and Sweeney Todd, and the films Primary Colors, Day After Tomorrow and Mary Queen of Scots. TV credits include CBS’ Girlfriends, ITV’s Trauma and Starz’s The Rook, among many others.

General tickets for The Lehman Trilogy on Broadway will be available beginning Wednesday, June 9.

The Lehman Trilogy was first commissioned by originating UK producer Neal Street Productions and developed and co-produced with the National Theatre at the Lyttelton Theatre in 2018, followed by a sold-out run at the Park Avenue Armory in the Spring of 2019. The play then returned to London for a 16 week run at the Piccadilly Theatre in the West End.

The play weaves together nearly two centuries of family history and, as described, “charts the humble beginnings, outrageous successes, and devastating failure of the financial institution that would ultimately bring the global economy to its knees.”

Other Broadway productions formerly produced or co-produced by Rudin – The Book of Mormon, To Kill A Mockingbird and West Side Story – have not announced return dates.