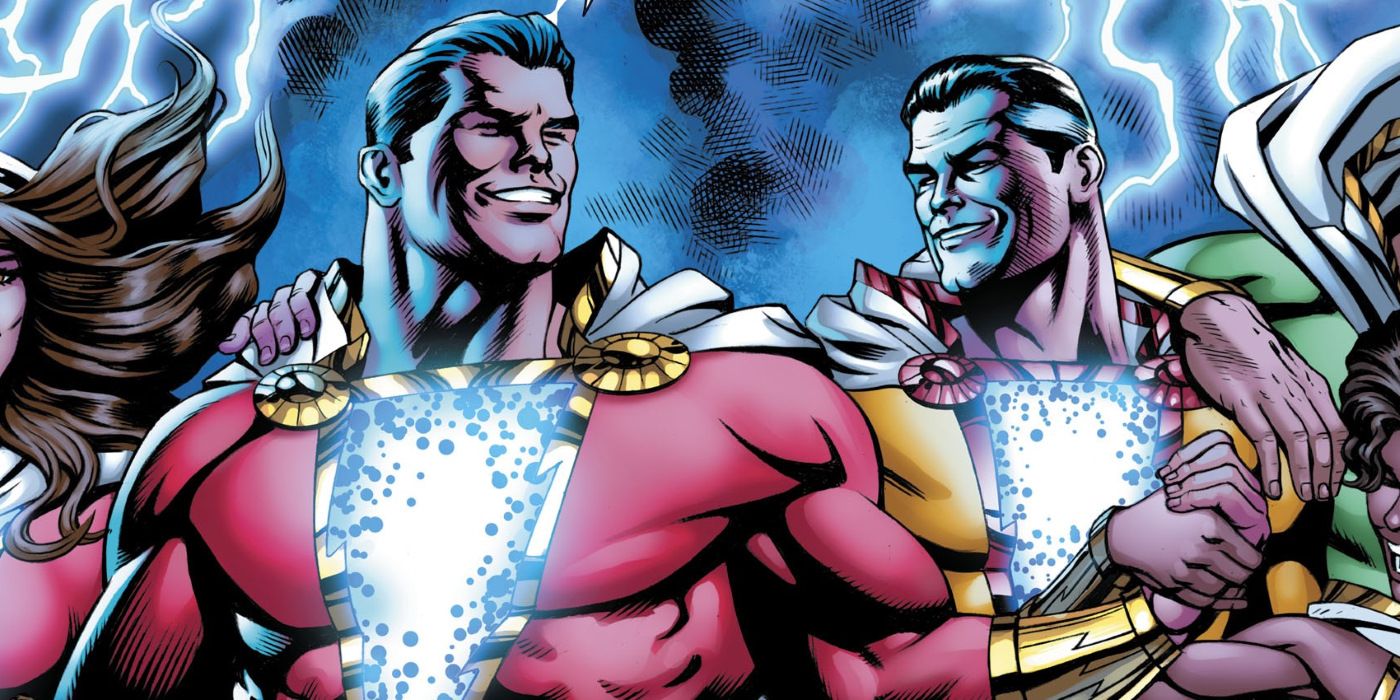 In the first issue finding DC’s Shazam family complete, there is little time for celebration, or even stopping to explain magic to Billy Batson’s confused father. But history has been made all the same… as Shazam #9 barrels into the fallout of C.C. Batson becoming the Seventh (and final) Champion. But even if the completion of the Shazam family seems to be a desperately needed win, the empowerment of Billy’s biological father may bring more challenges than solutions.

Thus far, the Shazam family’s travels throughout the Magiclands have held a lot of surprising twists, including the purpose of the seven thrones and their ultimate magical destiny. These revelations have not come without a price, as the Shazam family not only faces enemies new and old but separation from each other across the Magiclands. The biggest surprise of all seemed to be the return of Billy’s biological father, C.C. Batson, until Billy’s decision to grant his father his power to save his life in Shazam #8.

C.C. barely has time for a “Holy Moly!” before he has to put his newfound powers to the test. Papa Shazam seemingly takes to his powers like a fish to water and comes to the immediate defense of his son. Mary joins the fight without hesitation, seamlessly teaming up with the newest member of the Shazam family to tell Black Adam on no uncertain terms to leave their son/brother alone. But this moment of triumph is where writer Geoff Johns really sends readers down the rabbit hole (no surprise, given the Wonderland-ish cover by Mark Buckingham).

Just as they begin to turn the tide of the fight, both Mary and C.C.’s powers go on the fritz. Beating a hasty retreat, Billy transports them all from the fight into one of the Magiclands – The Wonderlands. This dizzying combination of Oz and Wonderland provides a momentary safe haven – despite a delightfully, ferocious appearance by the Cheshire Cat – for them to figure out why the Champions keep losing their might. The Wizard Shazam shows up with impeccable timing to bring the rest of the Shazam family to this finally full reunion. And also to task Billy with an impossible choice: In order to keep his powers, he must choose between his two families.

Family has been central to Billy’s character. Sharing powers with his foster siblings and even revealing his secret identity to his foster parents has given Billy a sense of identity perhaps more powerful than that of Shazam. By empowering his biological father, according to the Wizard Shazam, Billy inadvertently unbalanced his super-powered connection to his foster siblings. The Wizard’s ultimatum seems to doom any possibility of Billy’s two families - the one he was born to and the one he has made - coming together. But, in the land where many impossible things can be done before breakfast, Billy shows the Wizard Shazam why the most powerful DC superheroes are made to answer the impossible.

While the resolution of this issue is full of heart, there are more than a few storm clouds on the horizon for the Shazam family. Not only are their enemies on the move for the big fight promised in Shazam #10, but also there are questions of how will Billy’s choice will truly effect his family? But the family that is empowered together, stays together – right?

After their terrifying adventure through the Darklands, Billy and the rest of the Shazam family find themselves going over the rainbow and through the looking glass into the upside-down, topsy-turvy world of the Wozenderlands! It’s a magical, multicolored metropolis where it’s always time for a cup of tea, a game of croquet or even a stroll down the Blue Brick Road-but it’s also ruled by the mysterious Wizard of Wozenderland, desperate for the power of the six champions!

Shazam #9 is available now from your local comic book shop.

Star Wars: The Rise of Skywalker – Every Easter Egg & Reference
Related Topics
advertising
About The Author

Grace Wright started her life in comics with a stack of Sailor Moon manga and a short-lived career as a comics artist on her school playground. While her creative aspirations failed, this marked a lifelong love of talking anything comics including an undergraduate dissertation on the subject. After several years working in other industries, including managing a bookmobile, Grace returned to her love of comics full-time by pursuing a master’s degree in Comics and Graphic Novels at the University of Dundee. Now that she has completed her program, she is ready to use her studies for good to bring readers exciting updates in the world of comics as a writer for Screen Rant. She will read anything once but has a soft spot for anything superhero-adjacent. Grace currently lives in Nashville, TN with her wonderful partner, who indulges her endless comics rants, and a very demanding cat.