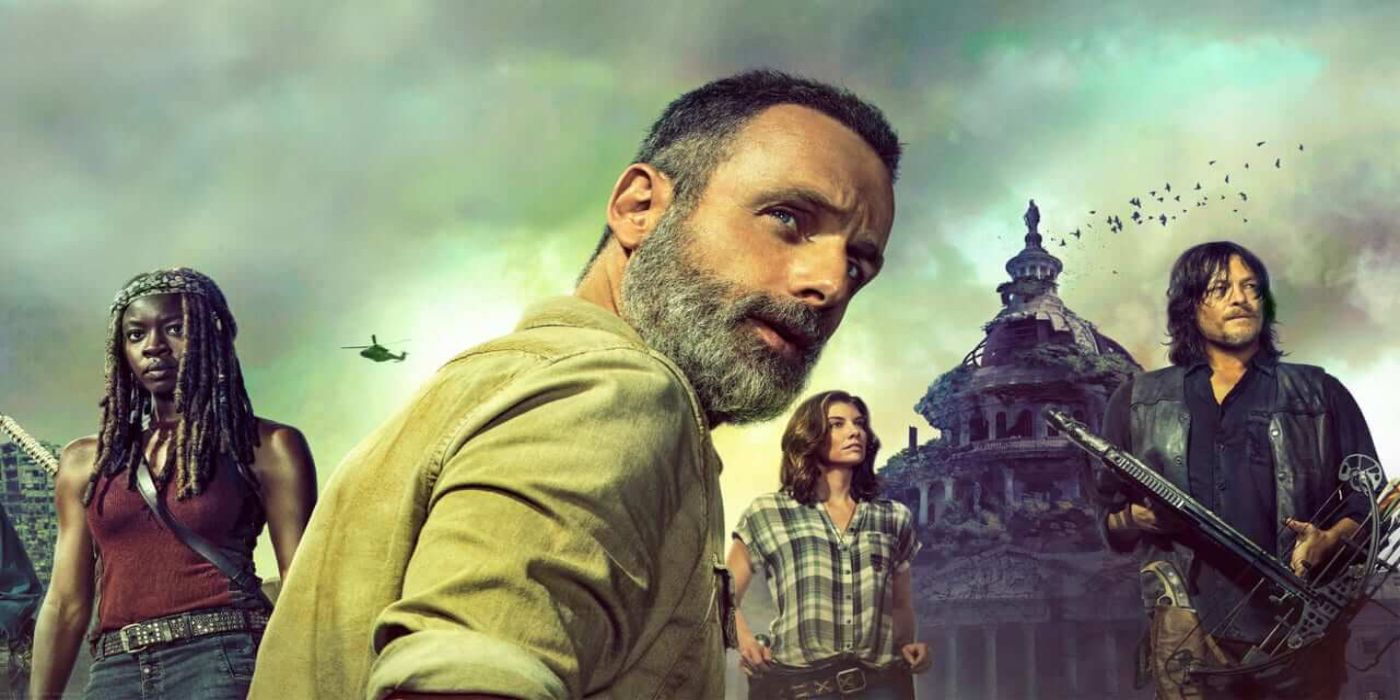 Over the course of 10 seasons (and 2 spinoffs), The Walking Dead has entertained fans with a special mix of suspense, gore, dread, and violence.  Along with Game of Thrones it introduced the concept of disposable main characters, with several death scenes overwhelming viewers.

RELATED: 10 Things We Loved About The Walking Dead’s First Season

We’re going to focus on the emotionally surprising moments on the show – not the shocking, gore-filled “walker” scenes that occur on a weekly basis.  For a series that delves deep into hopelessness and depressing revelations, there are still some shocking moments for fans to digest.

10 Dante is a Double-Agent

This recent reveal was shocking on more than one level – not just because the TV Dante (Jaun Javier Cardenes) was different from the graphic novel (which happens to many of the TV characterizations), as a wartime medic who quickly befriends resident doctor Siddiq and by proxy the survivors in Alexandria.

What’s more surprising is how the filmmakers gave The Walking Dead fans no clue that he was secretly in league with the Whisperers (more on them below) – it would be like revealing Michonne is actually a polar bear.  It was shocking to see Dante’s turn to a vicious killer when he murdered Siddiq, especially since there was no evidence that anyone in Alexandria (or Hilltop or Oceanside) could be a double-agent. Shocking yes – good storytelling, not really.

In a blink and you’ll miss it cameo in season 8, original survivor Morales (Juan Pareja), reappeared to Rick and Daryl as a ranking member of the antagonistic Saviours.  Morales was a key secondary character way back in season 1, encountering Rick, Andrea, Daryl, Dale and others near Atlanta. Before Rick and company set out for the CDC near the end of that season, Morales leaves with his family for Birmingham.

Morales the Saviour confronts Rick at one of their facilities years later, and before we can get much of an update on Morales’s story (they didn’t make Birmingham), Daryl shoots him in the head.  In the past, old characters showed up to add gravitas or simply a friendly face to the scene – here, Morales is dispatched without remorse to show how far Rick and Daryl have come from their naive beginnings.

8 The Governor keeps Heads in Tanks

Just when we were getting to like the Governor (David Morrissey) on some level and to think that maybe the string of unhinged characters (e.g. Carol’s ex-husband, Shane, the prisoners) was coming to an end, we’re introduced to the many victims of the Governor as heads stored in cloudy tanks.  The Governor presided over the idyllic Woodbury community, a rival to the one Rick and friend were building.

The zombified heads themselves weren’t any more shocking than other grisly parts of The Walking Dead (e.g. the “walker” stuck in the well); but the way they were introduced to the audience via Andrea’s discovery is chilling, as the Governor tries to rationalize the process as some form of self-repentance.  Fans of the series thought the Governor was suspect – and fans of the graphic novel knew he was – but this discovery was shocking and disturbing.

Once word got out that actor Andrew Lincoln was considering leaving the show that made him a star, fans speculated on the type of incredible, likely heroic death that awaited his character, Rick Grimes.  Grimes is the chief protagonist in The Walking Dead comics, and fans assumed his character would lead his family and friends to some sort of triumph before the TV series was done.

RELATED: The Walking Dead: Every Season Finale Ranked (According To IMDb)

As mentioned, and as we’ll see below, the main characters die regularly on The Walking Dead – so for Rick to not only live but be whisked by helicopter to an off-stage existence, was a shock.  This shock is exasperated by word that Rick Grimes will live on in a secondary production.

6 Lizzie is a Murderer

This shocking turn of events in Season 4 – where parentless child Lizzie killed her younger sister (off-camera), before being reluctantly dispatched by Carol – was jarring and difficult to watch.  Not just the actions of the character, who was becoming more mentally unstable as the season went on, but in trying to ascertain the way these episodes strove to drive the main story forward.

There was probably some moralistic narrative meant to be shown by the death of two children, perhaps to illustrate the cold-eyed brutality of a post-apocalyptic world.  But the bigger shock came to fans after the TV was turned off, as they tried to rationalize such an unsparing, “did that really happen” display within the larger story of The Walking Dead.

Surely one of the deaths on the TV series that was hardest to accept was when heir-apparent Carl Grimes is felled by a “walker” bite after saving loner Siddiq from at attack.  In the graphic novel, one-eyed Carl lived to carry the crux of the story going forward, developing as a successor to father Rick and his lofty ideals.

RELATED: The Walking Dead: 5 Reasons We’re Excited For The New Series (& 5 We’re Not)

There have been various articles on the impact this character’s demise had on the show, with speculation that the onscreen payoff – that Rick could let nemesis Negan live to appease dying Carl – was so meager as to prompt the reassignment of then showrunner Scott Gimple. Whatever the case behind the scenes, The Walking Dead was shown to be unafraid to disregard a pillar of its source material to achieve its storytelling goals.

One of the coolest, “what just happened” moments occurred in recent The Walking Dead history when our heroes are introduced to the wrath of the Whisperers.  These zombie herders were first referenced in Season 9 when they were overheard by Eugene and Rosita, so the audience knew they were out there somewhere.

RELATED: The Walking Dead: 10 Times Negan Did The Right Thing

But their deadly introduction to our heroes, while fleeing a walker herd by traversing a foggy cemetery, was still shocking.  When one of the typically easy-to-dispatch zombies dodges a sword and delivers a fatal strike to fan-favorite Jesus, telling him “you are where you do not belong”, we all gasped – after 9 seasons, the walkers were a terrifying threat again.

In a “just kidding” moment from The Walking Dead season 6 that the show is still dealing with, beloved delivery-boy turned lynchpin survivor Glenn Rhee was killed by walkers atop a dumpster defending suicidal colleague Nicholas. Shocked viewers mourned Glenn’s death for days, and fans braced for the continuation of the series without one of its favorite characters.

However, in the next episode, it was revealed that Glenn had survived the zombie attack by squishing himself under said dumpster, and the person we saw eviscerated was the deadbeat Nicholas.  That someone could escape “walkers” under a standard dumpster was a surprise – to feel so callously manipulated by the makers of The Walking Dead was really shocking.

If Glenn can survive a zombie horde by merely hiding under an ordinary dumpster, surely he would be spared from his ink-and-paper death on the TV series?  Alas, this was not to be the case, as Negan brutally beat Glenn to death (off-screen) in the first episode of Season 7.

Comic book readers knew Abraham was already dead at this point in the graphic novel, so his on-screen death at Negan’s hand 10 minutes earlier wasn’t entirely unexpected.  But similar to when the filmmakers hoodwinked the audience with Glenn’s dumpster resurrection, they seemed to feel this sneaky return to comic-form was justifiable storytelling. This recurring theme where the shocking death of a main character – or telegraphing their death one way and delivering on another, as was done with poor Glenn – really hit home when …

1 Sophie Comes out of the Barn

If there is one scene that typifies the theme of The Walking Dead while also propelling it to must-watch TV, it was when Carol’s daughter Sophie emerged from Hershel’s barn as one of the walking dead. In season 2, Sophie had become separated from the others during a “walker” attack, and the search for her over several episodes causes much consternation for the survivors and Hershel’s family.  Coupled with her absence, Glenn had discovered that Hershel was keeping several walkies locked in his barn, in the hopes of a future restoration to humanity.

It was a heartbreaking moment that we, the audience, should have seen coming; up till then, Hershel’s farm had given our characters welcome refuge, and Carl’s recovery from a gunshot wound gave them (and us) hope.  That Sophie lived in the graphic novel for years unharmed distracted us from the truth: that in one brutal moment, when the undead teenager was mercifully shot by stalwart Sheriff Rick Grimes, the zombie apocalypse was revealed to be unrelentingly cruel, and The Walking Dead cemented its legacy.

NEXT: 5 Things About Rick Grimes’ The Walking Dead Movies We’re Excited About (& 5 That We’re Nervous About)

Movie Maverick Mike is an experienced writer on all things cinema and Hollywood. He has written for newspapers, websites and blogs, and appeared as a movie expert on KSPS and CTVNews. He is a fan of all things cinematic, including foreign films – especially Bollywood! – and the business of movie-making. He maybe the only person who appreciates, even reveres, John Carpenter’s “Prince of Darkness”