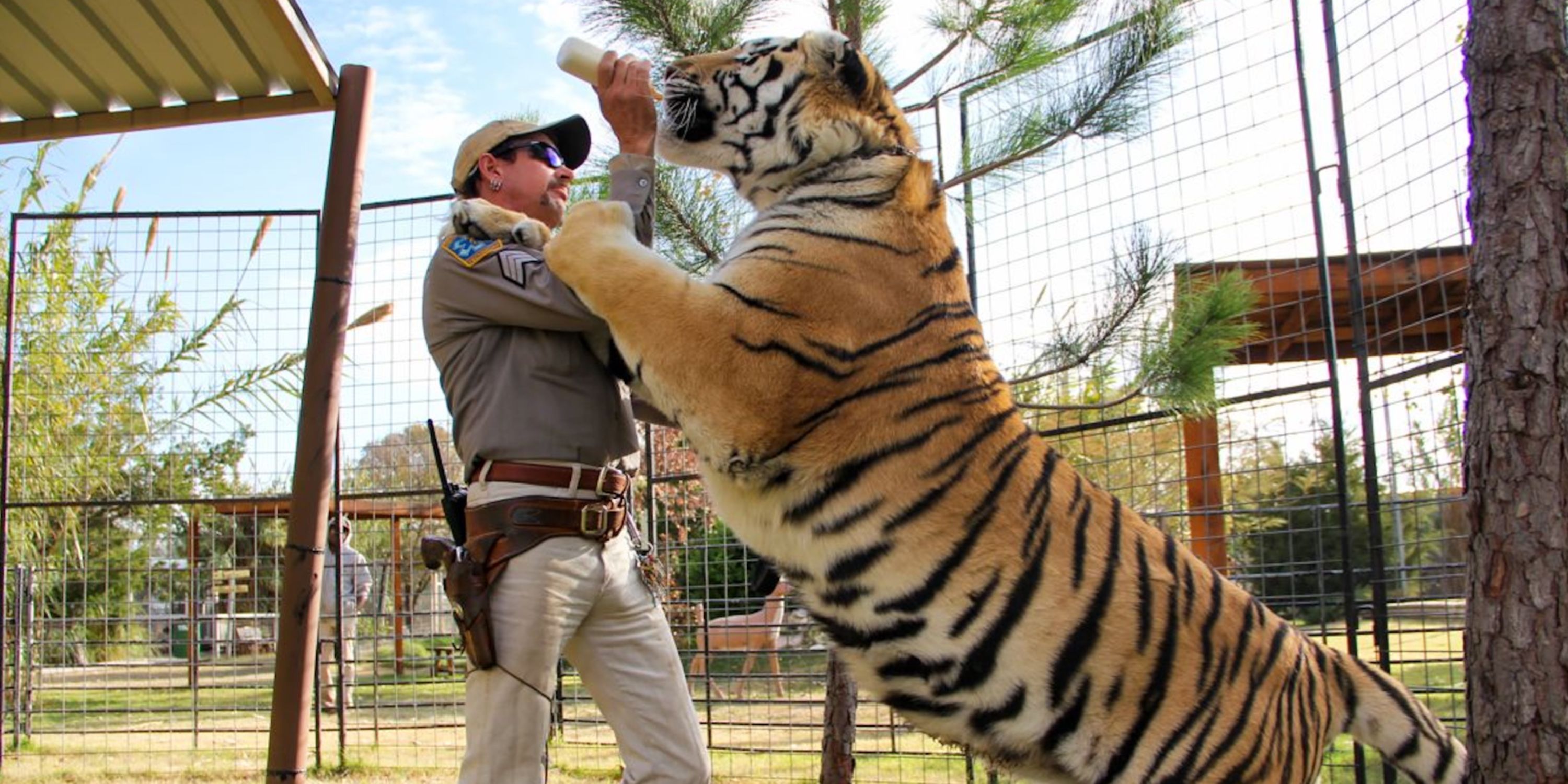 One Tiger King deleted horse scene was too graphic for Netflix. The latest big hit for the subscription streaming service has managed to gain a devoted following in a very short amount of time, thanks in no small part to how bizarre the series is. Though on the surface Tiger King may appear to be a simple story about one man’s efforts to maintain his private zoo for exotic animals, the truth is much darker. As owner of the Greater Wynnewood Exotic Animal Park, Joseph Allen Maldonado-Passage, aka Joe Exotic, has faced numerous accusations of animal abuse as well as outright criticism of his animal park.

The series examines the ongoing feud between Exotic and one of his most outspoken critics, animal rights activist Carole Baskin. As owner of the Florida based animal sanctuary Big Cat Rescue, Baskin took exception to Exotic’s animal profiteering. Over time the intensity of the battle between the two escalates to the point where Exotic becomes involved in a murder-for-hire scheme that results in his being sentenced to 22 years in a federal penitentiary.

Despite everything that has occurred, Exotic is now in the middle of a brewing storm of notoriety. A scripted series starring SNL’s Kate McKinnon is currently planned and it would be naive to assume the 57-year-old convicted felon doesn’t have his fare share of fans, judging by Tiger King’s popularity. However, according to The Mirror, there is even more to the story of Joe Exotic than many might believe. During a recent interview, Tiger King’s producer Rick Kirkham revealed that one scene in particular – in which Exotic killed a horse and fed it to his tigers – was too graphic to make the final cut of the Netflix series. Said Kirkham about the scene:

If anything the documentary doesn’t go far enough to show how crazy Joe is. He walked right up to that horse trailer, pulled out his revolver, shot the horse in the head, then cut it up and fed it to the tigers.

This incident reportedly occurred after Exotic told a woman that he would take care of her horse for her. Clearly, the opposite was true. In addition to this issue, Kirkham also reported that other vile acts were committed by Exotic during the filming of Tiger King, but that they did not make the final cut. Adding to Kirkham’s statements, the hit program’s co-director Rebecca Chaiklin accused Exotic of being a racist:

Joe is a racist, I would say categorically. He said things when we were filming that were very unsettling. I think most of it was ignorance and not having a lot of exposure, and I think he even evolved over the course of the time that we filmed.

Some may find these revelations about Exotic unfair, given that he is currently unable to defend himself. However, if Tiger King makes anything clear, it’s that Joe Exotic is a troubled man whose extensive issues took him to a place from which there was no going back. Having repeatedly demonstrated his character in various situations, it isn’t at all hard to believe that Exotic has a definite dark side to him. And while his outlandishness in Tiger King may at times be good for a laugh, it’s important to remember the series documents a real case with very real consequences.

Next: Netflix’s Tiger King: What Happened To Joe Exotic After The Show

Mike Jones is an author, screenwriter, world traveller and cinephile. His work has been featured in print and online in a variety of publications, and he’s also a Berlinale Talents alumnus. Cinema has always moved him in a big way and aside from having seen The Talented Mr Ripley more times than any other living person, he maintains a pretty darn healthy physical media collection. His favourite filmmakers include: Jordan Peele, David Lean, Alfred Hitchcock, Mike Leigh, Steven Spielberg, the Dardenne Brothers, Noah Baumbach, Michael Haneke, Barry Jenkins and Andrea Arnold. Often jet-lagged, Mike once turned down a certain A-list celebrity’s offer to join them for a night of partying after a strange encounter in an airport.