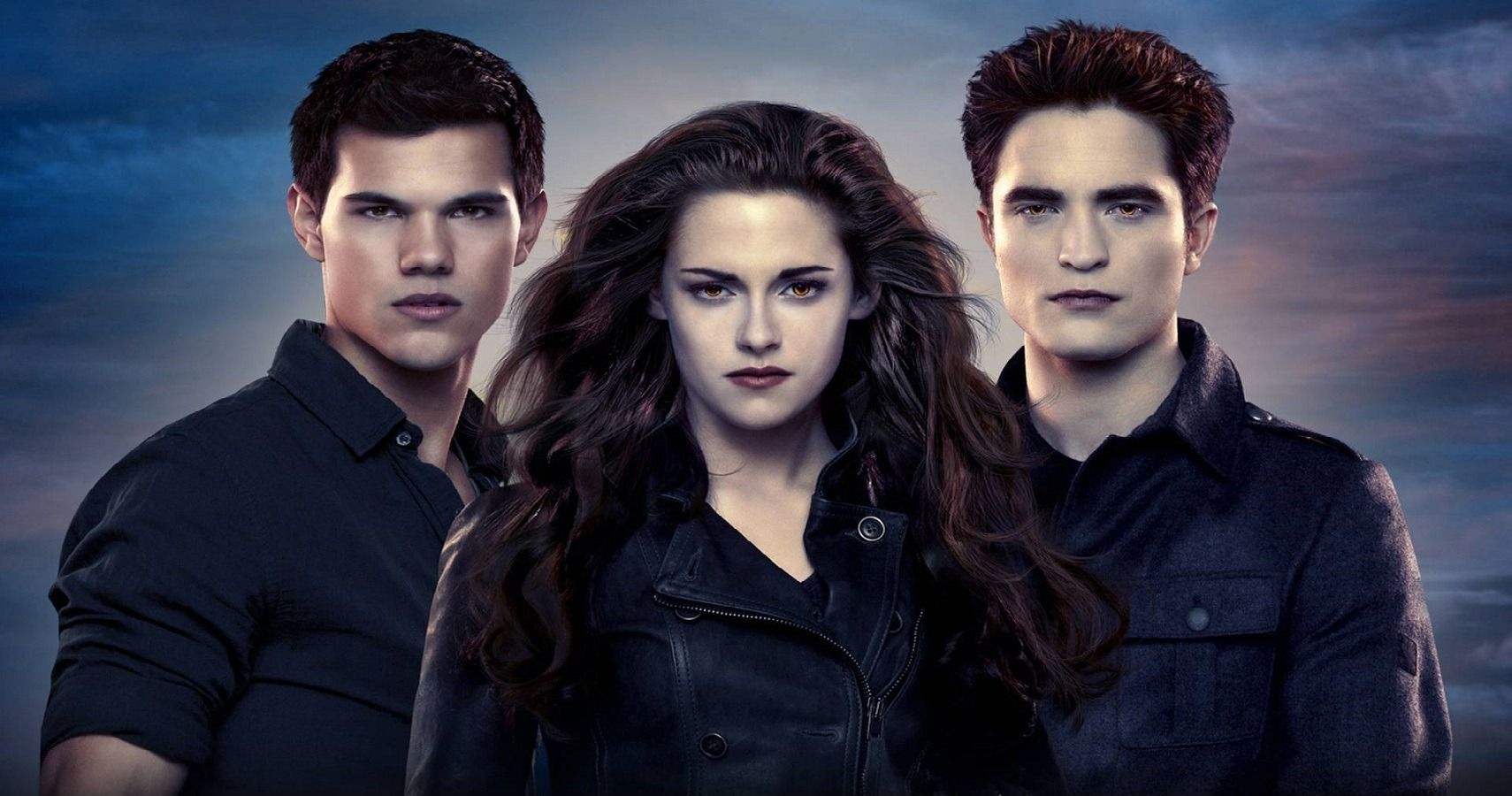 Are you Team Edward or Team Jacob? From 2008 to 2012, that was the hot topic regarding The Twilight Saga. Bella Swan (Kristen Stewart) clearly was destined to belong with her vampire boyfriend, Edward Cullen (Robert Pattinson). However, many fans preferred Bella with her werewolf friend, Jacob Black (Taylor Lautner).

RELATED: Twilight: All The Boyfriends Ranked From Worst To Best

10 Bella And Edward: He Watches Her Sleep

In Twilight, Bella and Edward meet and fall in love. But just like every other couple, they have to find out more about each other before they can establish a relationship. Because Edward is a vampire, that’s a little more complicated than the typical high school relationship.

Edward spends months watching Bella sleep without her knowing about it. While he thinks he’s doing this to protect her, it’s creepy. When Bella finds out about this, she barely gives it a second thought. She kisses him. She finds it endearing and romantic when it’s really not.

9 Bella And Jacob: Her Backup Plan

Bella and Jacob are pretty good friends. In New Moon, they grow closer together while Edward completely abandoned Bella. Fans thought Bella would eventually choose Jacob over Edward, but, as we know, that didn’t happen. Instead, she leads Jacob on. She knows he has feelings for her, but she still strings him along, making him believe he has a chance with her.

If Bella wasn’t interested in Jacob at all, she should have made that clear. Why did she keep leading him on? Was she using him as a backup plan in case things didn’t work out with Edward? What did Bella really think about Jacob? Whether you like Jacob or not, he certainly deserved better.

8 Bella And Edward: He Couldn’t Read Her Thoughts

Edward’s special power as a vampire is that he can read minds. This is handy when you’re involved with an enemy. However, from the very beginning of the saga, he is unable to read Bella’s mind. Why is that? Why are Bella’s thoughts locked away from Edward? Of course, this could just mean she’s destined to be his soulmate, but is there another reason?

RELATED: 20 Things That Fans Ignore About Bella And Edward’s Relationship In Twilight (And It Makes No Sense)

7 Bella And Jacob: Kissing Her Against Her Will

It’s hard when you’re in love with someone and they don’t share the same feelings. This is understandable, but Jacob takes this to a whole new level. In Eclipse, Jacob continues to try to get her to be with him. He even forces a kiss on her against her will. Whoa, Jacob!

The whole scene is uncomfortable. Bella tries to get away from the situation, but he still tries to show her that he’s the right man for her. Afterward, the entire kiss is dropped by pretty much everyone. It is never mentioned again.

Edward was born in 1901 and changed into a vampire when he was 17 years old. He is forever frozen in his 17-year-old body, but when Bella meets him, he would be approximately 107 or 108 years old. He grew up in a time period with different courting standards and traditions than Bella’s reality. He doesn’t want to move forward in their relationship (on an intimacy level) before marriage.

This is understandable, but Edward basically makes Bella feel guilty for even wanting to be intimate with him. He doesn’t understand that her dating standards are different than his. While he doesn’t have to give in to her desires, he should at least understand and not make her feel guilty.

Everyone knows Edward is super protective of Bella, but Jacob is just the same way. Throughout all four novels and five films of the saga, Jacob tries to control Bella’s choices. He hangs around and expects Bella to suddenly fall in love with him. He thinks he has an opinion in her life choices, including when she tells him she will have a normal wedding night with Edward in Breaking Dawn: Part 1.

RELATED: Twilight: 20 Things About Bella And Jacob’s Relationship That Make No Sense

Jacob understands the dangerous supernatural creatures Bella surrounds herself with and he’s only looking out for her safety, but at the end of the day, it’s still Bella’s decision. He can’t control her or change her mind. She doesn’t need a bodyguard.

4 Bella And Edward: Constantly Putting Her At Risk

Bella knows she’s dating a dangerous vampire, so she understands the relationship will never be “normal.” However, Edward still puts her at risk throughout their relationship. For example, he sometimes loses his control when they’re kissing. In New Moon, newly converted vegetarian vampire Jasper (Jackson Rathbone) nearly kills Bella with hunger when she has a paper cut at her birthday party. In Eclipse, Victoria (Bryce Dallas Howard) seeks revenge on Bella.

If Edward is going to date a human, then he should have more necessary precautions in place. Yes, part of it is Bella’s choice to hang out with vampires, but it’s also Edward’s responsibility to be careful with Bella. Why does Bella want to be in a relationship that constantly puts her in danger?

3 Bella And Jacob: He’s Dangerous, Too

One of Jacob’s convincing points when trying to encourage Bella to choose him instead of Edward is that he’s less dangerous than the Cullens. He’s not a vampire, but let’s not forget that he’s a werewolf. He can be just as dangerous. While Edward is a bloodsucking vampire, Jacob is a werewolf with severe rage issues.

For example, Sam Uley (Chaske Spencer) permanently scarred his fiancé, Emily Young (Tinsel Korey). He lost his temper, transformed into a werewolf in front of Emily, and she was standing too close. The same thing could happen between Bella and Jacob.

As already mentioned, Edward was born in 1901, making him about 107 or 108 years old when he meets Bella in Twilight. He might look like he’s only 17 years old, but his mindset is much older than her. Bella is still a teenager.

This presents certain uncomfortable, creepy implications. She is kissing and falling in love with a man who could be her great-grandfather. For many adult fans, their age gap is hard to look past. Teenage fans don’t seem to notice the age difference, but when you take a closer look at the relationship, it’s creepy.

1 Bella And Jacob: All About Renesmee

The whole plotline of imprinting in The Twilight Saga is pretty creepy. Jacob imprints on Bella and Edward’s newborn daughter, Renesmee (Mackenzie Foy), just hours after she is born. This is uncomfortable, especially when it seems Jacob is already thinking about a future with Renesmee, even though she’s still a young girl.

NEXT: Twilight: 5 Unhealthy Relationships (& 5 That Were Surprisingly Wholesome)

Next
Thor: Ragnarok – 10 Hilarious “Is He Though?” Memes

Kasy Long is a full-time freelance writer and editor based in Indiana, USA. She specializes in entertainment news, feature stories, lifestyle articles, and more. She covers entertainment news on Screen Rant for Valnet, Inc. She has a passion for everything Old Hollywood, particularly her favorite show of all time–“I Love Lucy.” In her spare time, Kasy can be found reading, writing, painting, and attempting new recipes.