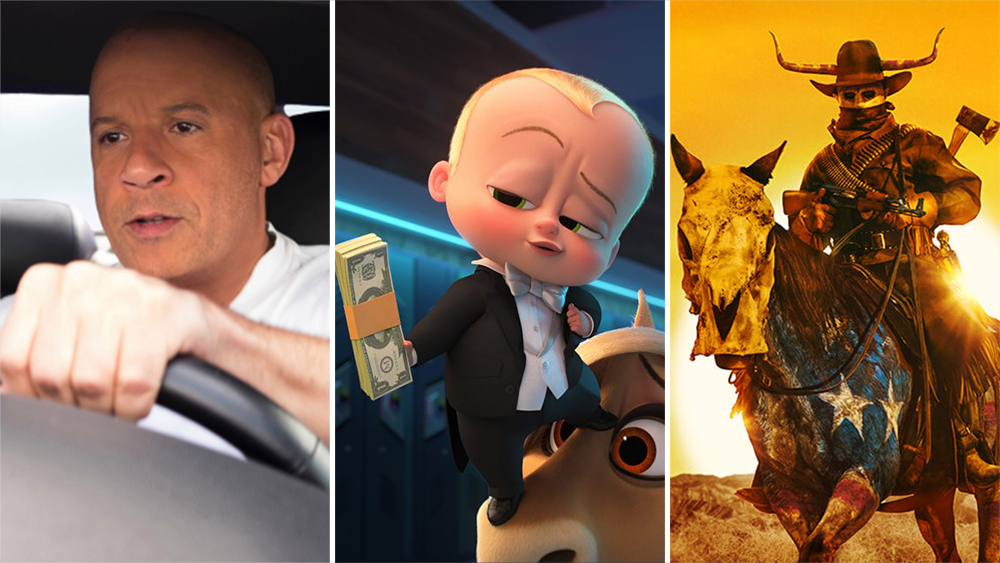 After raising the bar on what a movie can open to during the pandemic with F9‘s $70M weekend, Universal is adding a one-two wide release punch to the weekend with the debut of two titles geared at two different demos: DreamWorks Animation’s The Boss Baby: Family Business which is set to do $15M+ and Blumhouse’s The Forever Purge which is looking at $10M+ over 3-days.

Together with the second weekend of the studio’s F9, which is speeding toward another $28M (-60%), all three movies will not only own the top three spots at the B.O. for Uni, but bring the studio a weekend of $53M+. It will mark the first time since 2005 (Feb 11-13) that a major studio has owned the top three spots at the domestic weekend box office, the last being Sony with Hitch, Boogeyman and Are We There Yet? Boss Baby 2 is booked at 3,6K+ theaters while the fifth Purge is booked at 3k theaters. Through Monday, F9’s U.S./Canada box office stands at $76.6M after making $6.6M on Monday.

More films, brings more depth to the box office, and competition means business. Both the Easter and Memorial Day holidays have shown that people will make time for movies during the pandemic, even though outdoor activities are a huge rival as people break out from a life under lockdown.

It’s arguably an anomaly to see a studio releasing two different movies under the same label (Universal in this case) in one weekend. The last time a major studio did this was 20th Century Fox during May 19-21, 2017 with the openings of Alien: Covenant ($36.1M opening, $74.2M final domestic) and Diary of a Wimpy Kid: The Long Haul (opening $7.1M, $20.7M), and, yes, it was a tale of two different audiences. Extremely interesting here is that it’s Universal with three movies over two weekends. I hear that the P&A spend isn’t burdensome for the studio; that what they shelled out on F9 was largely written off last year. Universal’s next two big summer movies are M. Night Shyamalan’s Old on July 23 and MGM’s Candyman on Aug. 27.

Previews for The Boss Baby, Family Business, directed by Tom McGrath begin at 4PM on Thursday while Purge Forever will start early at 7PM. True, Boss Baby 2 is also going to be on the studio’s streaming service Peacock available to the top-two paid subscriber tiers (the first tier beginning at $4.99/month, second with no ads at $10), however, no one is expecting the film to steal any money from the box office. The service isn’t as dominant as Disney+ or for that matter HBO Max, so the expectation is that most families’ will point their cars toward the multiplex. The first Boss Baby, voiced by Alec Baldwin, who returns as the corporate cutie in part 2, opened to $50.2M over March 31-April 2, 2017 and went on to make $175M domestic, released via 20th Century Fox. All in, worldwide Boss Baby made $528M and was nominated at the Oscars for Best Animated Film.

Logline for Boss Baby 2: The Templeton brothers—Tim (James Marsden) and his Boss Baby little bro Ted (Baldwin)—have become adults and drifted away from each other. Tim is now a married stay-at-home dad. Ted is a hedge fund CEO. But a new boss baby with a cutting-edge approach and a can-do attitude is about to bring them together again and inspire a new family business. Tim and his wife, Carol (Eva Longoria), the breadwinner of the family, live in the suburbs with their super-smart seven-year-old daughter Tabitha (Ariana Greenblatt), and adorable new infant Tina (Amy Sedaris). Tabitha is at the top her class at the prestigious Acorn Center for Advanced Childhood. However, Tina is really a top secret agent for BabyCorp on a mission to uncover the dark secrets behind Tabitha’s school and its mysterious founder, Dr. Erwin Armstrong (Jeff Goldblum).

The first four Purge movies have collected $456.8M at the WW box office with the last title released in 2018, The First Purge, being the highest grossing WW with $137M, but the third movie, Purge: Election Year in 2016, being the best stateside at $79.2M. First Purge and Purge: Election Year opened over the July 4th holiday stretch with the former previously opening to $17.3M over 3-days, $31.2M over five days. The very first Purge, released in 2013, owns the franchise’s opening record at $34M. The horror series’ architect James DeMonaco returned as screenwriter and producer on part 5, which was directed by Everardo Gout. Logline: All the rules are broken as a sect of lawless marauders decides that the annual Purge does not stop at daybreak and instead should never end.

While F9 will hit PVOD in late July, Boss Baby 2 will not be released on PVOD given its drop on Peacock. Forever Purge, as I understand it, is looking at a pure threatrical window of roughly three weeks.

A24 has their 2020 Sundance thriller Zola hitting 1,400 locations and it’s expected to do in the low single digits over five days, $2M-$4M. Previews start tonight at 6PM for the Janicza Bravo-directed movie based on a Twitter thread about a stripper named Zola who embarks on a wild road trip to Florida. A24 held this film intentionally for a theatrical release, given their excitement for the $5M Taylour Paige and Riley Keough movie, and the hope is that the 18-34 crowd will come out for this movie, like they did in 2019 for the label’s genre pic Midsommar which posted $6.5M over 3-days, $10.9M over 5 over the July 4th frame ultimately making $27.4M stateside. Arthouses would be forever grateful for another grossing movie like Midsommar at this point in time. I hear LA is faring better than NYC with arthouse audiences as they make their way back from lockdown. Working in Zola‘s favor: it has a Rotten Tomatoes rating of 87% certified fresh.

Searchlight is opening its acquired Sundance documentary from Questlove, Summer of Soul (…Or, When the Revolution Could Not Be Televised), on July 2 in around 700 theaters and on Hulu. The pic looks back on the legendary 1969 Harlem Cultural Festival which celebrated African American music and culture, and promoted Black pride and unity. The pic is 98% certified fresh on Rotten Tomatoes. Searchlight held two preview runs last weekend and the studio will be reporting grosses.