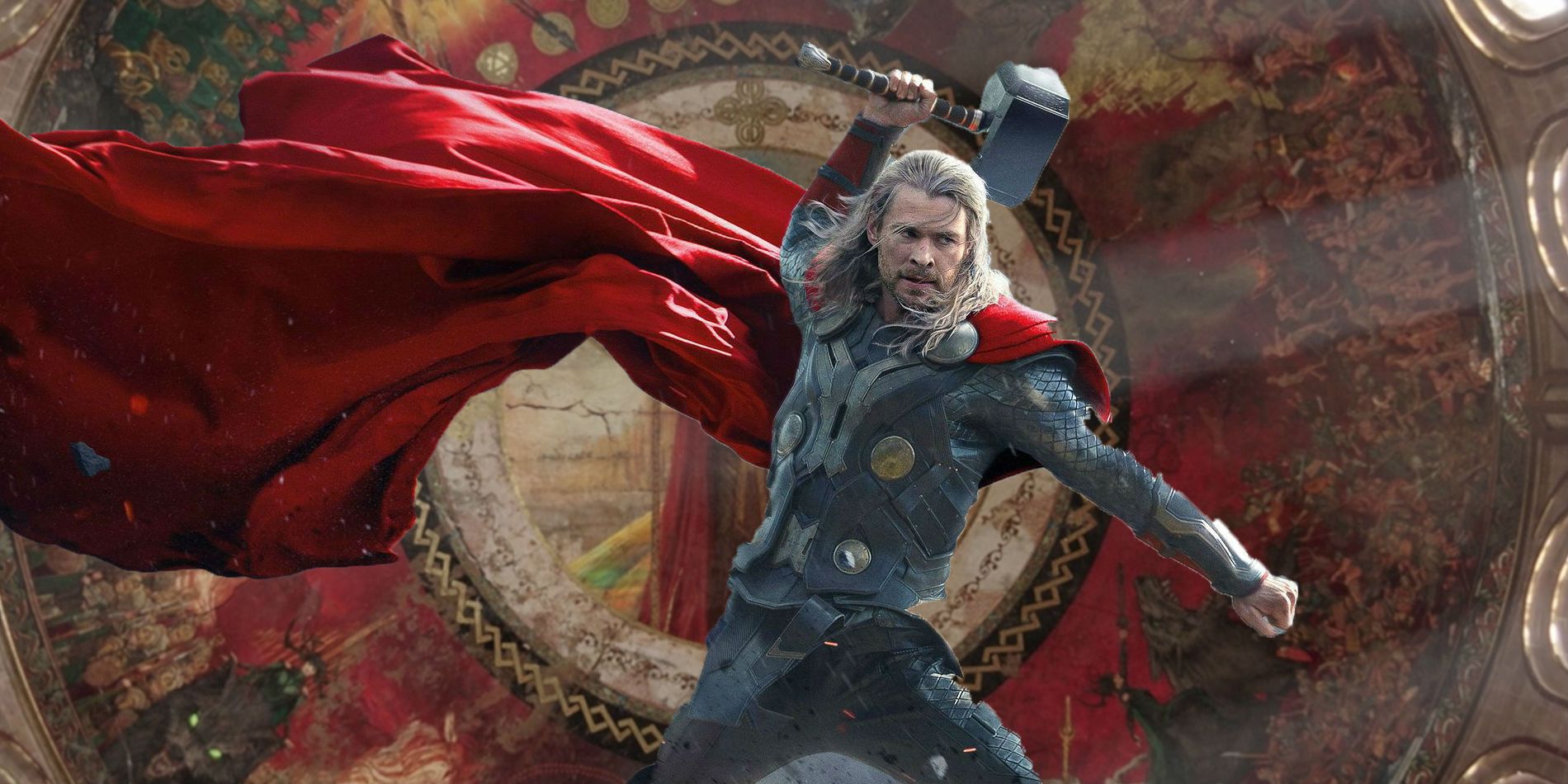 As one of the most popular Marvel characters, Thor has become a household name ever since Chris Hemsworth portrayed the role in 2011’s Thor. Two sequels and a handful of team-up movies later, the depictions Thor present moviegoers with a rich blend of cinematic excellence and Norse mythology, though Marvel does take some liberties with latter.

First introduced in his solo film, Thor subsequently joined the Avengers in the Marvel Cinematic Universe’s first team-up movie, 2012’s The Avengers. Since then Thor has become a fan favorite, appearing in all three sequels to The Avengers and two sequels to his own franchise, Thor: The Dark World and Thor: Ragnarok.

Related: The Avengers: 10 Most Shameless Things Loki Has Ever Done

The mythology and culture of the Scandinavian people, upon which Thor is based, is a very complex system of beliefs, centering around a warrior-culture that values strength and honor above all. The amiable God of thunder is the embodiment of these values in both the mythology and Marvel’s adaptations. In his stand-alone films, he is charged with protecting humanity as well as the rest of Asgard from destruction and calamity, as dark forces like elves and the goddess of the underworld herself try to gain control. However, while Marvel captures Thor’s personality and convictions well, there are still many things that the MCU decided to change about his character and his supporting cast.

Marvel Uses Only a Few of the Nine Worlds of Lore

In Old Norse cosmology, there are nine realms in which different beings inhabit, all connected and held up by a mythical ash tree called Yggdrasil. In the leaves of the tree rest the homeworlds of the Gods and the light elves. Around the trunk of the tree sits the worlds of the ice, fire, giants, and dark elves. The human world sits there too, directly connected to the Gods via the rainbow bridge, Bifrost. Likewise, the underworld is nestled among Yggdrasil’s roots. Each of the Nine Worlds possess its own unique terrain and creatures.

While Marvel didn’t show every realm, the ones they did show were excellent representations. In Thor, audiences got to see the cold-blue land of the ice giants and the opulent home of the Gods, Asgard. Plus they managed to make the Bifrost look a lot less hokey than it sounds. In Thor: The Dark World, Marvel portrayed the dark elves and their barren wastelands and the land of fire with Surtur in Thor: Ragnarok. It is obvious the Marvel team did a respectable amount of research to construct the realms.

Thor Gets a New Look and Abilities

Thor is one of the most powerful and respected gods in the entire Norse pantheon. As the defender of humanity, he wields a magical hammer called Mjolnir, which is capable of leveling mountains in one hit. In popular representations of the thunder God, Thor is depicted as having red hair and thick red beard, riding into battle on a chariot carted by the rams, Tanngrisnir and Tanngnjóstr, translated from Old Norse into “teeth-bearer” and “teeth-grinder.” He’s also the son of the Allfather Odin and husband to the earth Goddess, Sif.

Marvel took the most recognizable aspects of Thor and adapted the rest. In the Thor movies, he is known as the God of thunder and son of Odin (Anthony Hopkins) and brandishes Mjolnir. However, the films state that the magical hammer can only be raised by those who are worthy, but in the mythology, Mjolnir is just very heavy. Likewise, Marvel traded in Thor’s red hair for Hemsworth’s golden locks and ditched the ram-chariot all together. Thor also fell in love with the human Jane Foster (Natalie Portman), instead of a fellow Goddess; in the films, Lady Sif (Jaimie Alexander) is relegated to just one of Thor’s friends, assisting him in his battles on Earth in Thor.

Norse Odin Is the God of War; Marvel’s Odin Has a Rounded Character Arc

The Allfather Odin sits at the head of the Norse pantheon of Gods, presiding over them and maintaining the balance between each of the Nine Worlds. He is the God of wisdom, poetry, war, and healing, making him the most respected and feared of all the Gods. In stories from the mythology, not only did he give up one of his eyes to acquire magic, he is also accompanied by two ravens, “thought” and “memory,” that fly around the earth and report back their findings.

Related: Thor: How The Bifrost Was Fixed Before Dark World

However, Marvel depicted Odin in a more fatherly light in the first two Thor movies.  The only time the audience really saw the war God on the battlefield was in a flashback in the first Thor film. Though he adopted Loki as a son and taught Thor valuable, fatherly lessons in the first two films, Odin’s backstory is complicated in Thor: Ragnarok when Hela (Cate Blanchett) reveals his history as a conqueror. The early entries in the franchise depicted Odin as a just and beneficent ruler, but in the throne room scene, Hela smashes the tableaux depicting Odin’s peaceful veneer. She details Asgard’s foundation and says, “I was [Odin’s] weapon in the conquest that built Asgard’s empire.”

While Marvel’s Odin looked like the real deal, there was very little of the mythological Odin incorporated into the movies until Thor: Ragnarok‘s reveal of Odin’s violent, conquering past.

Loki is heralded as the God of mischief, playing pranks and throwing insults at his fellow Gods. His misbehavior often gets him in trouble, but he’s usually able to talk his way out of any situation. By blood, Loki is a half-giant and also a shapeshifter, which has allowed him to have many non-human children. Most notably, he is the father of Sleipnir, Odin’s eight-legged horse, Jormungandr, the serpent circling the earth, and Fenrir, a gigantic wolf. He is also the father of Hel, Goddess of the underworld.

In the Marvel movies, Loki (Tom Hiddleston) was depicted as being hellbent on taking over Earth and supplanting the ruler of Asgard. While Loki’s words did get him in trouble with the other Gods in the original Norse stories, he never had such ambitions. In Thor: The Dark World there was a comedic scene where Loki transforms into Captain America and a scene where he pretends to be Odin, but that’s the extent of shapeshifting. Likewise, Marvel completely changed familial relations. The Marvel Loki was brother to Thor and Hela and adopted son of Odin; in the Norse mythos, however, Loki is the son of Fárbauti and Laufey, two unheralded figures in Norse mythology.

Every culture has their own version of the “end of times,” and for the old Scandinavian people, Ragnarok is just that. This cataclysmic event prophesied the deaths of many of the Gods, Odin, Thor, and Loki included. Amidst the chaos of battle, the giant wolf, Fenrir, swallows the moon and sends the world into darkness. The giant serpent circling the earth thrashes and causes the waves to crash violently. And finally, Surtr rises from the land of fire wreaking havoc on everything in his path. Not all the Gods and humans die however, as some are left to repopulate the worlds after the battle.

While Marvel tried to keep true to the final battle in Thor: Ragnarok, they ended up giving it a glossy Hollywood treatment that stepped away from the original mythology. In the film, Hela was the one who started the entire mess, which never happened in the Old Norse stories. Though the audience did get to see a fight with Fenrir and Surtur in Asgard, unlike Norse mythology, Thor and Loki intentionally caused Ragnarok to defeat Hela and escape with their lives. In the final moments of Asgard, Marvel simply kept the gist of a “Godly fight” and adapted all the rest.

Related: Doctor Strange 2 vs. Thor 4: What Is The Most Important MCU Phase 4 Movie?

In many ways, the Thor franchise holds together remarkably well; after all, it is a film adaptation of a comic book series, which is itself adapted from Norse mythology. In each step, some aspects of the characters and plots get lost or exaggerated, and while some elements hold over from the centuries’ old stories, many were stripped away to fit into the superhero genre. When Thor: Love and Thunder continues the God of Thunder’s story in 2021, fans of the Norse stories may get to see even more elements of the mythos come to life on the big screen.

Zoe was born and raised in New York City, and thrives among its creative chaos. She is avid entertainment news journalist, writing about anything from music and bands, to what’s new on Netflix. When she’s not writing, you can find her attending local concerts or getting muddy on a rugby pitch.