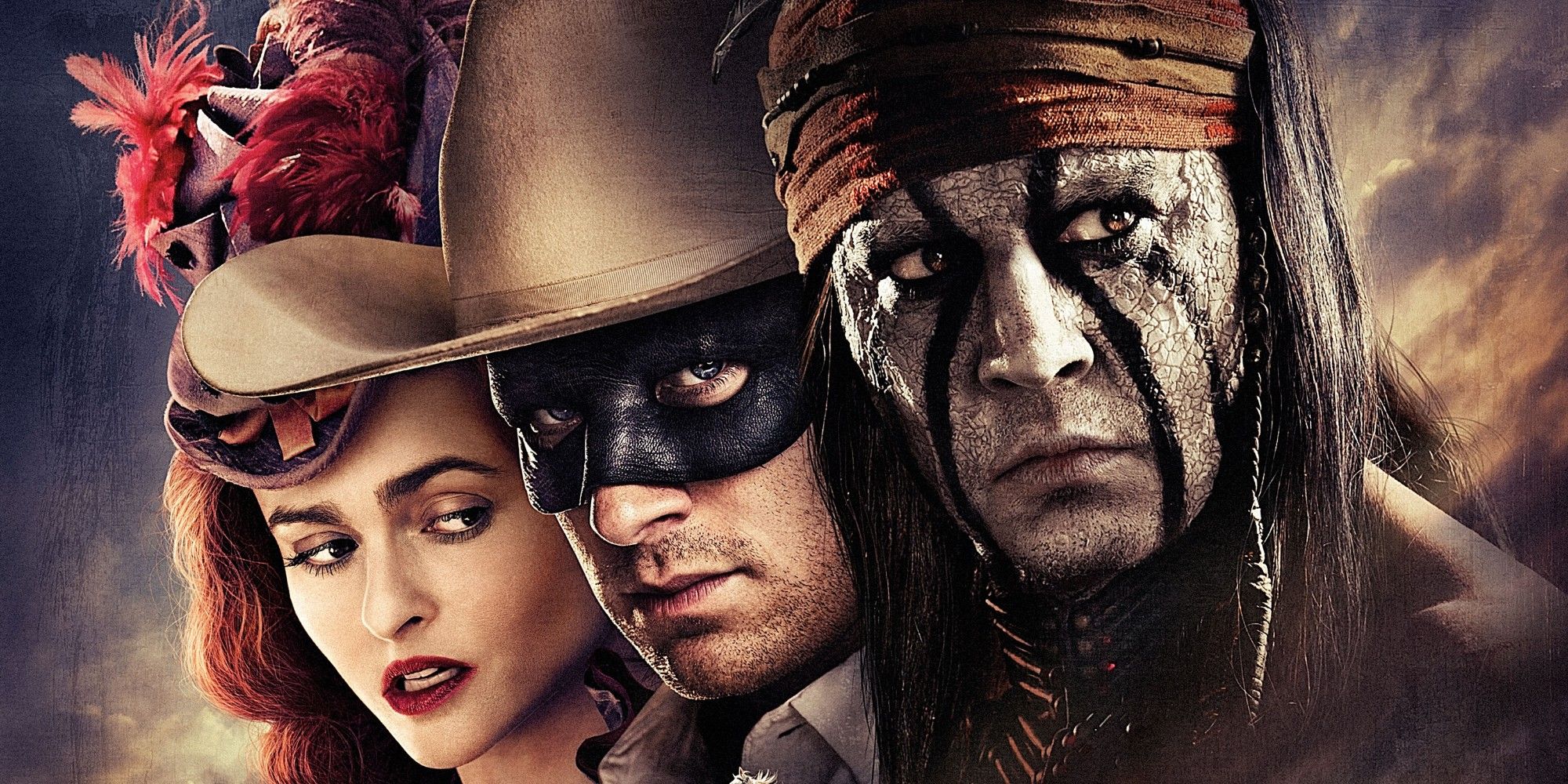 Here’s everything that went wrong with Disney’s The Lone Ranger. Created for radio in the 1930s, the onetime Texas Ranger-turned masked vigilante known as The Lone Ranger would quickly go on to become a pop cultural icon in the first half of the 20th century and make the jump to television in 1949, with Clayton Moore and John Hart playing the titular role opposite Jay Silverheels as his Native American comrade Tonto. From there, the characters went on to star in a handful of theatrical films, including a pair of movies released as part of the TV series in the ’50s (with Moore and Silverheels reprising their roles).

By the time Disney started working on a Lone Ranger movie reboot in the late 2000s, it had already been close to thirty years since the character’s most recent appearance on the big screen (in 1981’s The Legend of the Lone Ranger), which begged the question of whether the property was actually commercially viable anymore. In spite of those concerns (and hoping to replicate their recent success with the original Pirates of the Caribbean trilogy), the Mouse House recruited Pirates 1-3 writers Ted Elliott and Terry Rossio to write the film before later hiring Jack Sparrow himself, Johnny Depp, to play Tonto opposite then up and comer Armie Hammer as the lead.

After Pirates trilogy helmsman Gore Verbinski came aboard as its director in 2010, Disney’s The Lone Ranger had most of the pieces in place to become a hit. Of course, things didn’t work out as planned and the film bombed at the box office three years later, losing as much as $160-190 million. In truth, however, there were already concerns about the expensive western well before it opened, and for reasons that go beyond questions about the public’s interest (or lack thereof) in the reboot to begin with.

With an estimated budget of $225-250 million plus $150 million in marketing costs, The Lone Ranger would’ve unavoidably struggled to cover its costs, regardless of its general reception. The Mouse House was well-aware of that too, which is why they formally delayed production on the film in the summer of 2011 in an effort to reduce their expenditures. This all took place just a few months after the studio’s motion-capture movie Mars Needs Moms had bombed at the box office (losing upwards of $144 million) and the budget for their then-unreleased John Carter had ballooned as high as $263 million, so there was added pressure on Disney to to get The Lone Ranger‘s budget under control before shooting began. Their spending issues were also public knowledge by then, which resulted in a lot of negative early press for the film, even after the cast and crew took a salary cut to help with the larger costs.

Its budget wasn’t the only reason The Lone Ranger struggled to generate positive buzz ahead of its release, either. There was already the controversy over Depp’s casting as Tonto, despite the actor’s claims of having Native American ancestry and intent to use the movie as a way to “chip away a little bit at the [Tonto] cliche,” as he told the National Post in 2013. Others took issue with Verbinski’s deconstructionist approach to retelling The Lone Ranger’s origin story, which he described as “‘Don Quixote’ told from [his sidekick] Sancho Panza’s point of view” in a 2011 interview with Hero Complex. Whether they preferred The Lone Ranger and Tonto in their original forms or felt the property needed to be re-imagined in a more authentic fashion (in terms of its representation of Indigenous Americans) to feel less antiquated, there were few people who seemed genuinely excited about the film ahead of its release.

Related: Pirates of the Caribbean 6: Why Disney is Rebooting the Franchise

When it finally opened in theaters, The Lone Ranger took a beating from critics (see: its 31% rating on Rotten Tomatoes), and for valid reason. The movie has many of the same flaws as Verbinski’s Pirates of the Caribbean sequels, including a bloated runtime (just short of 2.5 hours) and a messy narrative that too often meanders (particularly during the second act). It’s also apparent the script was subjected to multiple rewrites intended to water-down its post-modern re-examination of The Lone Ranger mythology and make it more of a conventional crowd-pleaser; to quote Alonso Duralde in his review for The Wrap, “the film feels constantly torn between deconstructing the legend and presenting it in a straightforward manner.” As for Depp: his portrayal of Tonto as a capable warrior whose idiosyncratic behavior stems from the traumas of his past works well enough early on, yet it increasingly comes across as a tired – and, at worst, culturally and racially insensitive – shtick as the film runs on.

Lone Ranger Was Hamstrung By Its Competition

Combined with all the bad buzz from its budgeting troubles, the negative reviews only further damaged The Lone Ranger‘s prospects at the box office. Even then, the movie fell short of projections, taking in $48.9 million domestically over the five-day Fourth of July holiday frame in 2013 (or around $11-20 million less than box office trackers were predicting). In fairness, this can also be attributed to the film’s stronger than anticipated competition: The Lone Ranger premiered the same weekend as the animated sequel Despicable Me 2, which exceeded expectations by bringing in $143.1 million in its first five days playing in the U.S. (setting a new record for animated movie openings). That meant any families that might’ve decided to take a chance on The Lone Ranger – even with the bad reviews – under different circumstances were off watching Gru and the Minions’ shenanigans instead.

As sprawling and tonally confused as The Lone Ranger can be, it also has an undeniably personal touch (there’s no mistaking Verbinski’s unique blend of violence and goofiness) and is far more willing to take risks than the majority of live-action remakes and reboots Disney’s made in the years since its came out. On top of that, it boasts some genuinely entertaining set pieces – most notably, the big train sequence during the third act – and might’ve made for an engaging summer blockbuster with some additional editing and tightening of the narrative. In his own review of the film, critic Guy Lodge even called it a “fabulously impractical folly [that succeeds as] both a big, beautifully realised throwback to Hollywood Boy’s Own storytelling and an intelligent revision of Old West history.”

Whichever way you look at it, The Lone Ranger is a strange beast full of things one would never expect to find in a Disney tentpole – like a character committing an act of cannibalism – and aspires to pull off an extremely precarious balancing act. (In one of its more bewildering moments, a scene in which numerous Native American people are killed in battle is shortly followed by… a visual gag involving a horse in a tree.) Whether you think it works a little, a lot, or not at all, it’s a movie that leaves an impression and, as whole, is reflective of a time when the Mouse House was comparatively daring with the type of tentpoles it was willing to spend hundreds of millions of dollars on making. Much like The Lone Ranger, it’s far weirder, yet also more fascinating, than its legacy might suggest.

NEXT: How TRON 3 Can Avoid Disney’s Sci-Fi Movie Mistakes

Top Gun 2: Glen Powell’s Role In Maverick Is Because Of Tom Cruise
Related Topics
About The Author

The Boys Showrunner Responds to Negative Fan Reviews
Upcoming Margot Robbie Movies: What The Harley Quinn Actress Has Coming Up
Justin Bieber Joy Riding Yellow Vespa in Los Angeles
The 10 Best Covers of Neil Young’s After the Gold Rush
Here’s How These Bachelor Winners Found Love After the Final Rose