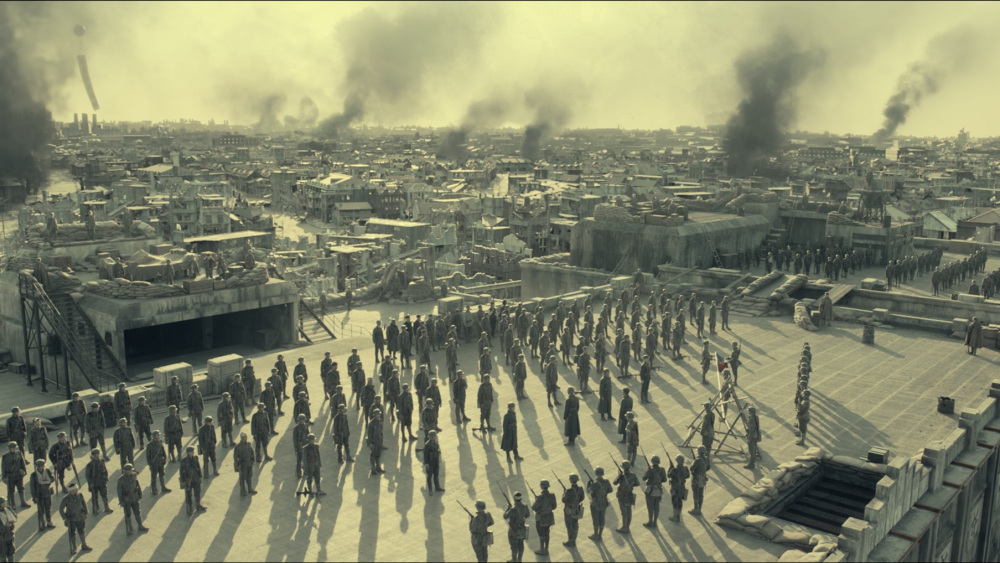 The first major blockbuster of the pandemic era, The Eight Hundred this week became the No. 1-grossing movie of 2020 worldwide, jumping ahead of Bad Boys For Life ($430.3 million global, per Sony). The Guan Hu-directed war epic has through Friday amassed $434M at the Chinese box office alone, and is also now the 10th biggest movie ever in the Middle Kingdom.

Since the official release on August 21 (more than a year after its original date was derailed), The Eight Hundred has relinquished the No. 1 slot on only four days, demonstrating its dominance even in the face of major Hollywood movies. The reported $80M production is expected to wind down when the National Holiday releases begin on October 1. One of those titles, Leap — which was originally slated for the Lunar New Year — got a jump on the holiday with previews starting today, and led the day at RMB 56M ($8.2M), putting The Eight Hundred into second place.

So where do things stand as of this week in terms of global rankings, and can China finally surpass North America given the Middle Kingdom’s successful handling of cinema reopenings after the COVID-imposed shutdown?

From January 1-September 22, the North American box office has generated $2.036 billion according to figures from comScore (see chart below). That’s still ahead of China which is in 2nd place at $1.015B, but as domestic releases continue to be pushed out of 2020 (Black Widow, Death On The Nile and West Side Story most recently) and if local Middle Kingdom movies continue to perform near the levels of The Eight Hundred, industry sources believe the market could make up the difference. Chinese cinemas this weekend are bumping to 75% capacity, another sign that authorities are confident in the health situation.

Analysts have been predicting for years that China would overtake domestic any time now. This is certainly an unprecedented era which may help speed up the process, but even if Middle Kingdom turnstiles spin faster than North America in the remaining quarter of 2020, it doesn’t mean the feat would be repeated across 2021.

A distribution source thinks it’s possible for China to overtake North America this year, especially with Disney/Marvel’s Black Widow moving out of November. But, this person notes that even if Black Widow had stayed in 2020, it probably would have earned more in China than North America, given the significant capacity restrictions and closed cities in the U.S.

On deck in China are a handful of movies with potential for the National Day holiday. We’ve heard the combined titles could do over $1B across a two to three week period. That would mean that China could essentially close the gap with domestic and catch up to North America by November. And that’s particularly if the U.S. doesn’t pick up — last weekend’s full domestic gross was just $13.5M — and the latest Disney date changes don’t bode well.

There are no major new Hollywood releases either in or outside China now until November’s No Time To Die. That is, if the Bond movie doesn’t move.

Coming next week in China are Lunar New Year holdovers Vanguard on September 30 and Legend Of Deification (Jiyang Zia) on October 1. Also debuting October 1 is My People, My Homeland. The latter, a patriotic sequel to My People, My Country, includes segments directed by Zhang Yimou, Ning Hao, Xu Zheng and Detective Chinatown‘s Sicheng Chen. The previous film last year did nearly $450M locally.

Legend Of Deification is the very highly-anticipated follow-up to smash animated hit Ne Zha ($720M in China). Directed by Teng Cheng and Wei Li, it centers on celestial army commander Jiang Ziya who must vanquish a demon threatening the existence of the mortal realm. After learning the creature’s fate is tied to that of a young girl, Jiang Ziya disobeys Heaven’s edict and spares the demon, resulting in his banishment. Ten years later, he is given one more chance to complete the task, and must decide: is joining the ranks of the heavens worth the price of one innocent life? WellGo USA is releasing on the same day domestically.

Peter Chan’s Leap for its part shines a spotlight on the Chinese women’s national volleyball team, depicting the struggles of several generations of the squad in its attempts to achieve glory for the nation. Other titles due for release during the holiday period include comedy Coffee Or Tea? and an animated take on Mulan titled Kung Fu Mulan (it will be interesting to see how the latter fares in the wake of Disney’s live-action version’s disappointment).

Looking ahead, domestic could make up some ground with major titles, but there just aren’t that many of them now. No Time To Die, releases via Universal overseas starting November 11, then travels to the U.S. on November 20. Bond is big in the Middle Kingdom so a date is to be expected. Other key studio fare coming down the pike includes DreamWorks Animation/Universal’s The Croods 2 (the first movie was a bona fide hit in China back in 2013 and became one of the first to get a release extension), Ryan Reynolds-starrer Free Guy from 20th/Disney, long-awaited sequel Coming 2 America from Paramount and WB’s Dune and Wonder Woman 1984.

It’s too early to tell on China release dates for those pictures, or potential domestic box office given the fluid situation there with a shifting calendar and no timeline for the coveted Los Angeles and New York markets reopening.

However, if Tenet has proven anything thus far, it’s that under current conditions, a movie designed to be a blockbuster is faring much better overseas than in the U.S. So, depending on how things evolve, China could conceivably make up the difference separating it from North America. What’s more, there are some potentially big local titles tentatively set for the Christmas period including Shock Wave 2, A Little Red Flower and The Yin-Yang Master: Dreams Of Eternity.

Meanwhile, the UK, France and Korea are running close in positions 3, 4 and 5 on the chart and Russia and Germany are neck-and-neck. COVID restrictions are coming back in some parts of Europe, though as of today’s there have not been major cinema closures. Either way, it’s also possible the rankings below will shift by the end of the year.

Here’s a chart of the current Top 10 worldwide markets (through September 22), with a codicil from comScore that these are the most accurate numbers available given that studios were not reporting during the height of the pandemic overseas — there is still some clean-up to do. Also note that each market presents different dynamics based on not only the movies available, but the particular protocols and constraints imposed by COVID.