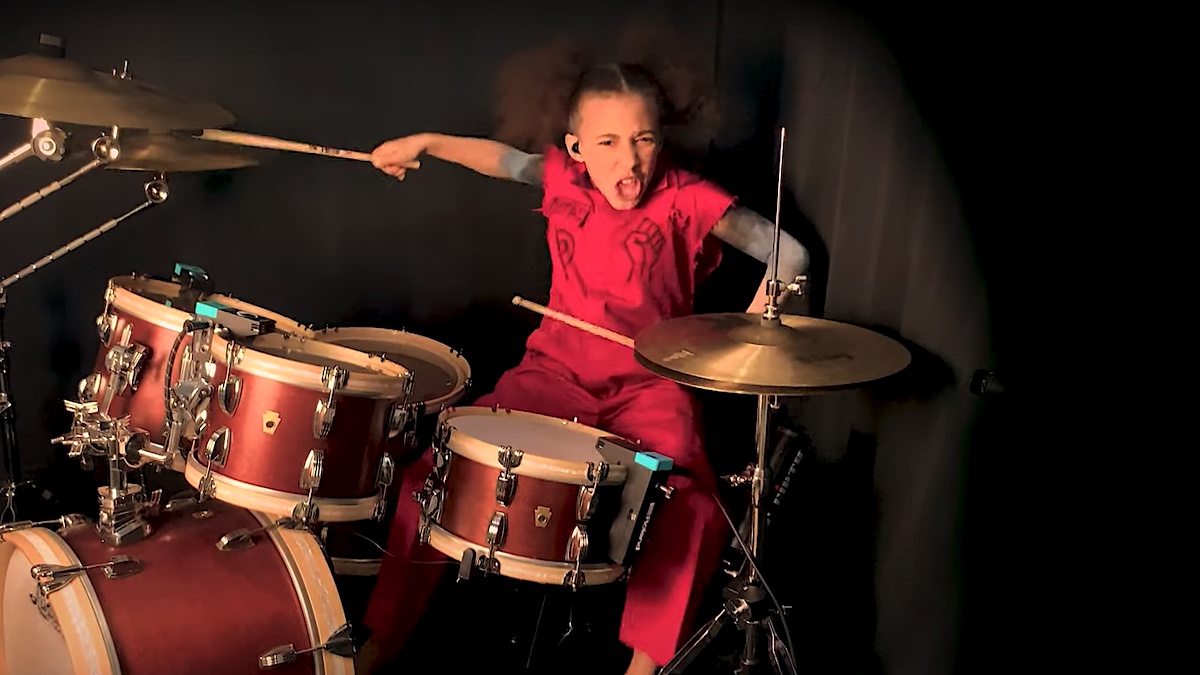 Nandi Bushell was already our favorite kid musician of 2020, but she just gave us one more “wow” moment before the year ends. The 10-year-old prodigy rocked an impressive drum cover of Slipknot’s “Unsainted”, declaring herself a “total metal head.”

It’s been an amazing year for Nandi, who found herself in the midst of a viral multi-round drum battle with the one and only Dave Grohl for several weeks. The drum-off culminated in each musician writing a theme song for one another, as well as a face-to-face video chat. Grohl eventually conceded defeat, but they even made plans to write a song together.

While Nandi has proven herself to be a strong guitarist and bassist in recent months, her cover of Slipknot’s “Unsainted” shows off her mastery of the drums, the instrument that first made her a YouTube sensation. This time around, Nandi played a double kick pedal on the bass drum for the first time, all while barefoot.

The youngster also rocked a Slipknot-style red jumpsuit, writing in the YouTube description, “Yes! I am a total metal head! I love how awesome the drumming is in @Slipknot ! This is my first attempt at double pedals! Taking my playing to the next level. This song is called #unsainted by #slipknot! Incredible drumming Jay Weinberg! This song brings my A game, Corey Taylor #metalhead #metal #heavymetal #doublepedals.”

The performance comes a couple of weeks after she was presented with a Custom Ludwig Legacy Mahogany drum set by Lenny Kravitz and accomplished jazz drummer Nate Smith in a video surprise. She obviously put the set to good use immediately with the Slipknot cover.

The drum kit is not the only sweet gift that Nandi received in 2020. Tom Morello presented her with one of his Fender Soul Power Signature guitars after she performed Rage Against the Machine’s “Guerrilla Radio” on three instruments, and she promptly mastered Audioslave’s “Cochise” with the new axe.

Watch Nandi Bushell rock Slipknot’s “Unsainted” below, followed by the video in which Kravitz and Smith presented her with the drum kit. Pick up a drum set like the one she plays here.