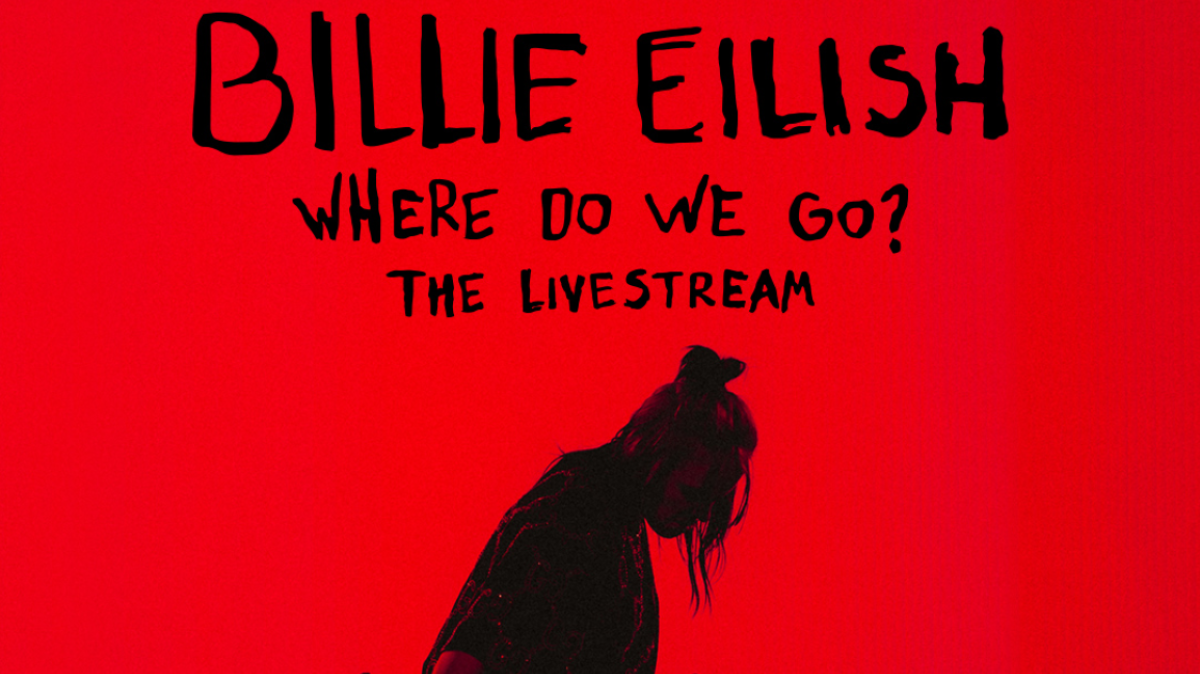 WHEN WE ALL QUARANTINE, WHERE DO WE GO?: Billie Eilish was one step away from world domination. After releasing one of the most acclaimed albums of 2019, WHEN WE ALL FALL ASLEEP, WHERE DO WE GO?, which debuted at No. 1 on the US Billboard 200, nearly sweeping this year’s Grammys with accolades including Album of the Year, amassing over 67 million Instagram followers since her career began five years ago, creating the theme song for the 25th James Bond film, and proving herself to be the coolest green-haired teen there is, the 18-year-old musician just had one mission left in order to take over the world of pop music: embark on a worldwide arena tour.

The Where Do We Go? World Tour was expected to run from March to September of 2020, but its run only lasted for three dates due to, well, you know. Since the pandemic ruined the concept of live music as we know it, Eilish has performed virtually several times, including a set during the “One World: Together at Home” charity showcase and a remote NPR Tiny Desk concert. In July, she released “my future”, an ASMR-level breathy, jazz-inspired single that showcases her voice better than ever before, showing the potential for what her future music might sound like. But can a popstar become an internationally renowned name without a world tour to deliver her there?

This month, Eilish presented her attempt at a substitute. For WHERE DO WE GO? THE LIVESTREAM, she spent months again working with Moment Factory, the multimedia company that also worked on her live tour. Using XR technology from her native Los Angeles, Eilish, her production Grammy-winning brother, Finneas, and their longtime live drummer, Andrew Marshall, would perform live virtually from a 60 ft. x 24 ft. stage, surrounded by 100 ft. x 24 ft. 360 LED screens to provide an immersive 3D experience for fans. The stream was hosted on Eilish’s website, powered by interactive platform Maestro with interactive production from lili Studios, and was sponsored by Global Citizen, NIVA, Postmates and Verizon. Tickets for the stream were $30 a pop, which gave fans access to the concert that could be streamed for 24 hours after its premiere, as well as a pre-show filled with special content and a selection of exclusive merch. Additionally, 500 fans would be pre-selected to interact with Eilish prior to and during the show.

the pre-pre show: Even a day before Eilish’s live experience began, fans could already enter her world through a series of interactive spaces. One room showcased the event’s exclusive merch, which included beanies, tees, crewnecks, and even Eilish’s signature Fender ukulele, which appeared to be sold out by the day of the show. Proceeds from some of these items went towards Crew Nation, a charity formed to help the concert crew members impacted by events cancellations this year.

Another room, labeled “Vote,” gave fans information on this year’s election (a notable theme of the night, considering the livestream took place just 10 days before Election Day in the US). Elsewhere, viewers could re-acquaint themselves with Billie’s tunes in the “Music” section of the site, or they could check out what their peers have been doing in the “Fans” area, which featured fan art of Billie and covers of her songs.

Live chat sidebars in English, Spanish, Japanese, and Portuguese (as always, the Brazilian fans showed up) were also made available for fans to communicate on the day of the show. The forums served mostly as places to launch emojis and all-caps cheers into the void before being swiftly ushered out by other fans’ messages, making conversations nearly impossible to follow. With a fanbase like Billie’s, this was no surprise.

THE PRE-SHOW: Billie’s dad, Patrick O’Connell, was tasked with launching the event’s “pre-show” one hour before the concert was set to begin, explaining to fans how to use the event’s chat and “watch together” functions and encouraging everyone to treat the show like a live, physical affair. His one piece of advice: “Turn up the bass.” While Patrick O’Connell is certainly famous in the eyes of Billie Eilish fans, the singer invited many other celebrities to appear as part of her voting initiative. Lizzo, Finneas, Alicia Keys, Jameela Jamil, and Eilish’s “surrogate dad”, Steve Carell, all showed up remotely to encourage viewers to vote in this election and know which representatives will appear on their ballots.

Between exclusive advertisements for Billie’s Fender ukulele, Beats headphones, Gucci, and charitable organizations Support + Feed and REVERB, Billie put on an interactive trivia game to test even her most loyal fans. Fans guessed her star sign (Sagittarius), the card game she loves to play on tour (Speed), and how old she was when she first dyed her hair (nine).

Around 15 minutes before the live concert was set to begin, a string of Billie-focused content played for her fans. First, the pre-show re-aired Not My Responsibility, Billie’s powerful short film on body shaming. This was followed by Billie-led interviews with her crew, who have not been able to work during this pandemic, in addition to a teaser of the fourth installment of Billie’s annual video for Vanity Fair. Finally, fans saw a sneak peek of Billie Eilish: The World’s a Little Blurry, the R.J. Cutler-directed Apple TV+ documentary set to premiere in February 2021. The featured scene showed Billie and Finneas recording the first line of what would become WHEN WE ALL FALL ASLEEP, WHERE DO WE GO? in Finneas’ bedroom. When Billie thinks of the line, “I have taken out my Invisalign, and this is the album,” the production pair burst into laughter. It’s a lighthearted way to signal the start of the show.

you should see her on this stage: Nothing particularly unexpected came from the music Eilish performed throughout her livestream. Finneas and Andrew Marshall’s performances were more or less the same as what appears on Eilish’s recorded music, Billie’s vocals were as vivid and heavenly as fans expected them to be, and, as Patrick O’Connell hinted, the bass was certainly loud. But the design of Eilish’s live stage not only exceeded expectations; it provided effects that would be nearly impossible to pull off at an in-person concert.

“Everybody from home, what’s good? We’re live,” Billie shouted after the opening of “bury a friend”. Her outfit for the night — a glittering, cream-colored Gucci shorts set — was bathed in red light before her shadow appeared behind her, projected like the shape of a ghost. The display got spookier from there, just in time for Halloween, as a King Kong-sized tarantula appeared over Billie as she performed “you should see me in a crown”, looking like it could step on the teenager at any moment. Many of the stage projections referenced Eilish’s videos. The giant spider could have been plucked from the crown Eilish wears in the “you should see me in a crown” video while she sang “xanny” on the song’s corresponding video’s white bench. Later on, Eilish sang “ilomilo” from the ocean floor, surrounded by cartoon fish and the enormous shark from the track’s visualizer. For “my future”, Eilish performed within the anime-inspired lush forest setup in the song’s animated music video. The singer appeared to exist within that landscape, dancing under the same sunlight that helps the floor’s flowers and vines grow.

The visual highlight of Eilish’s livestream concert was her performance of “i love you”. At big arena shows, there is often a moment where the main performer appears somewhere other than the stage; perhaps, they’re suspended above the crowd, or they’re seated in a random aisle next to unsuspecting fans. It’s a way to give non-front row concertgoers an opportunity to see the performer from another perspective — something that is surely missed when watching concerts remotely. Virtually, Billie chose her spontaneous performance spot to be atop the night sky, sitting next to her brother. Since the show aired in Los Angeles at three p.m., this night sky was obviously a simulation. But still, Billie and Finneas appeared to be sitting on a pillar hundreds of feet from the ground, spotlighted by the moon. It’s a breathtaking visual that, with current technology, can most likely only ever serve a virtual audience.

HER FUTURE: When it came time for Eilish to perform her song “all the good girls go to hell”, she chose to have impacts of climate change projected on the stage. Videos of natural disasters, melting ice caps, polluting factories, and protests zoomed past her. As the song ended, the stage displayed the words, “NO MUSIC ON A DEAD PLANET.” Hell is a teenage girl, but it’s also what the world will look like if people don’t take action soon —  and vote accordingly. “I voted last week. It was very fun, very exciting,” the singer said about voting in her first presidential election at 18. “It is so important for you to vote, especially if you’re young, because we’re the ones with futures … Unless we don’t vote and we all die!” All the good girls use hyperbole, too. Although it was not mentioned how many of Eilish’s fans are actually eligible to vote, Eilish made it clear that voting in the US election was something crucial to her, and therefore, should feel important to her fans.

everything she wanted: “The only benefit of not being in the crowd is you’re not all in the pit fainting like usual,” Eilish said to her fans with a giggle before performing “when the party’s over”, sitting on a stool under a spotlight. It was clear throughout the livestream that Eilish was thinking of her fans, telling them that she hopes they feel safe and cozy or encouraging them to drink water. At times throughout the set, she asked fans to clap along or wave to the beat.

When Eilish performed “everything i wanted”, projections of her fans — most likely the pre-selected 500 — appeared behind her like the Zoom form of a VIP audience. As fans appeared singing along, wearing Billie merch and “I voted” stickers, or holding signs proclaiming where they’re from or how much they love the singer, it became clear what was missing from WHERE DO WE GO? THE LIVESTREAM. So much of what a pop concert embodies is the space and sound the fans take up. Throughout the show, Eilish’s vocals are almost too clear and too perfect. She’s never interrupted by her fans’ screams, never in awe of how many words they’re able to sing along back to her. In between song performances, the people present at the livestream — perhaps Eilish’s crew, or even her parents — clapped for the performers. But their applause was the volume at a school concert or a café cabaret show. They came nowhere near the magnitude of the screams, cheers, or even tears present at a true Billie Eilish arena show.

“Onstage is the only place I ever felt like myself and like I belonged. That’s in front of you guys and with you guys. That will happen one day,” Eilish said hopefully before breaking into her most-streamed single, “bad guy”, and asking fans to bounce along with her. She couldn’t see her fans, but she could clearly feel them. Billie Eilish couldn’t travel around the globe to perform for her fans, so she gave them her world instead. Maybe a virtual show can’t replace a physical one, but for now, for Eilish, and for her fans, this had to be enough.