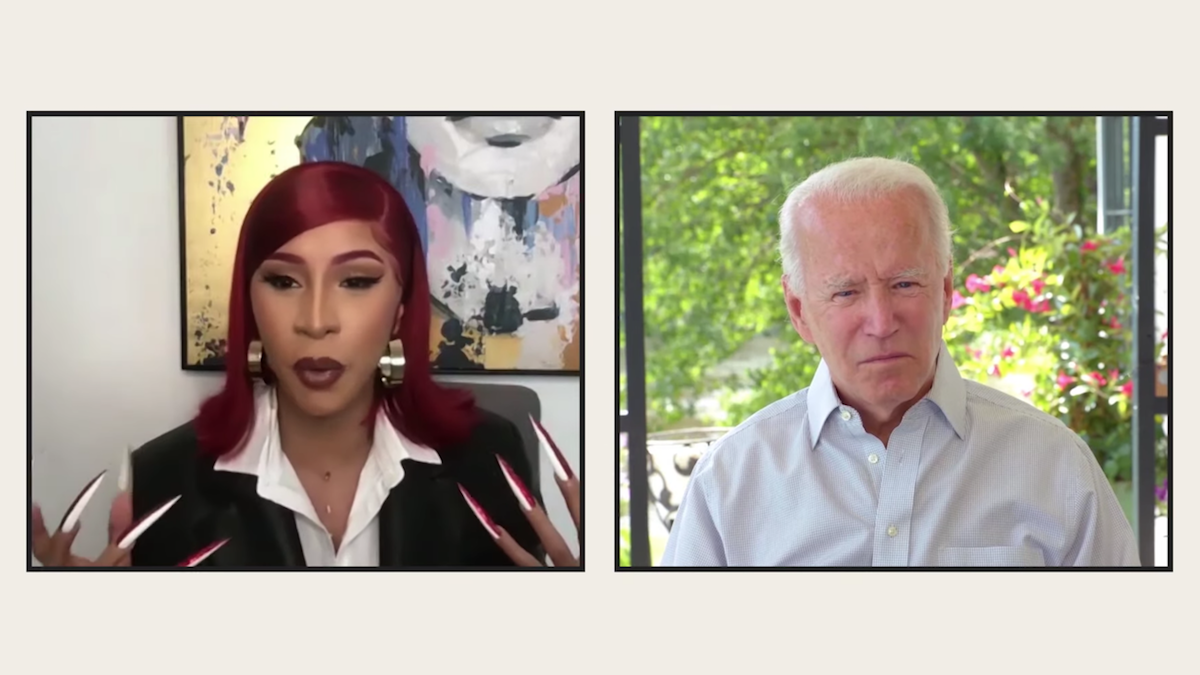 Earlier this month, Cardi B revealed that she’d spoken to presumptive Democratic presidential nominee Joe Biden about a number of hot button issues. It turns out that interview was part of a much larger Elle cover story, and it’s been released in full today. Over the course of their 16-minute conversation, the two discuss Donald Trump and his dangerous lies, Black Lives Matter protests, healthcare reform, and more.

On the topic of the presidency and the White House’s duty to serve the people, Cardi said she just wants “Trump out” because “his mouth gets us in trouble so much.” “I don’t want someone to lie to me and tell me that it’s okay not to wear a mask, that everything is going to be okay,” she continued, adding, “I want a president to tell me what the steps are for us to get better, to tell me, ‘This is why it is taking so long, this is why other countries are doing better than ours.’”

Biden agreed with the New York rapper’s assessment about Americans deserving better, but also noted that the US is currently in a position to embrace great change.  “I understand one of your favorite presidents is Franklin Roosevelt,” said the 77-year-old politician. “Roosevelt said the American people can take anything if you tell them the truth. Sometimes the truth is hard. But right now, we’re in a position where we have an opportunity to make so much progress. The American public has had the blinders taken off.”

Cardi brought up the ongoing protests against police brutality and racism, sparked by the deaths of George Floyd, Breonna Taylor, and others, and said “it’s simple” to see what is being demanded. “We are asking for fairness, and we are asking for justice,” said the once fervent Bernie Sanders supporter. “That is all. I feel like everything people are asking for is getting interpreted in a very different way. No, it’s simple: We just want justice. We want to feel like Americans.”

Biden applauded Cardi’s comments, as well as the youth leading these protests. “You’re the smartest, the best educated, the least prejudiced, and the most engaged generation in history,” he told her. “And you’re going to change things.”

Elsewhere, the “WAP” superstar said that the next president should provide free healthcare and free college. Biden replied that he would and promised to give free education to “anybody with a family that makes less than $125,000.” “And the way we can pay for all of this by doing practical things,” he added, “like making sure that everybody has to pay their fair share.”

Watch Cardi and Biden’s full interview below. The mostly virtual Democratic National Convention begins tonight and runs through Wednesday and boasts performances from Billie Eilish, The Chicks, and  Maggie Rogers, among others.

While the 2020 Elections may be Cardi’s main focus right now, the Grammy winner has also been thinking about America’s future a few years down the road. In a tweet over the weekend, Cardi said she wants fiery and young US Representative Alexandria Ocasio-Cortez to eventually take over the Oval Office. “She better run for president when she turns 35.”

She better run for president when she turns 35 https://t.co/TcSfYLGeah