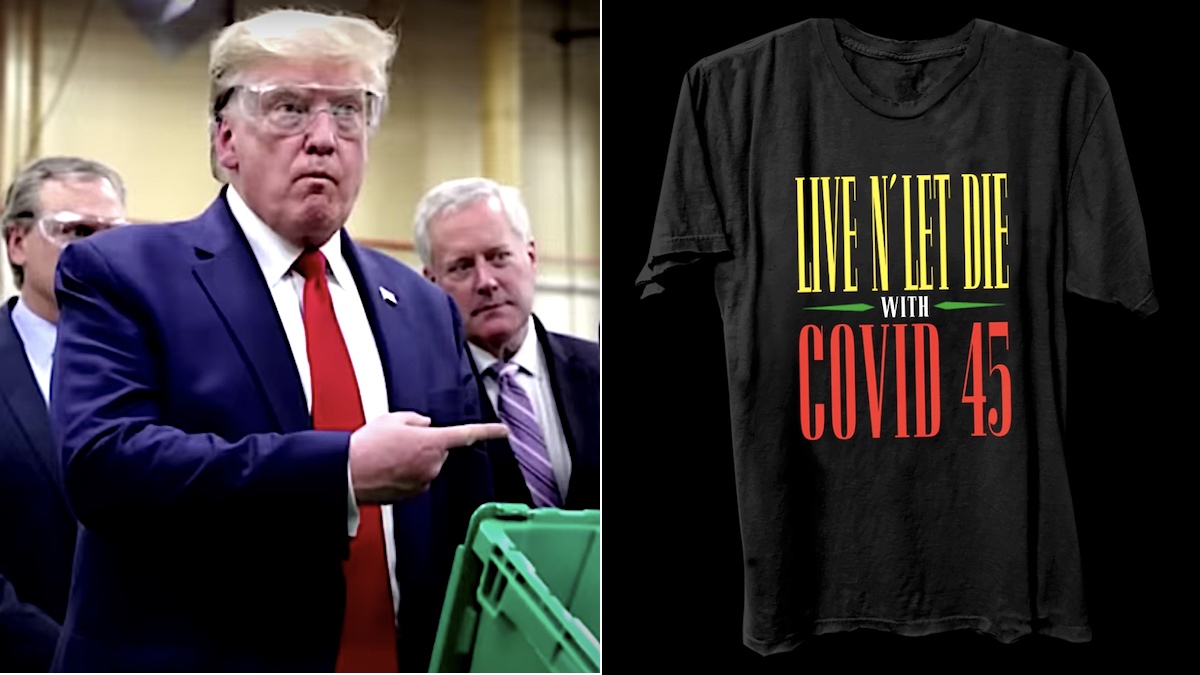 Guns N’ Roses have turned one of the most ironic moments of the pandemic into a charitable piece of apparel, selling a “Live N’ Let Die With COVID 45” t-shirt on their official merch site.

Last week, President Trump toured a factory in Arizona that was manufacturing essential N-95 face masks while not wearing a mask himself. That was glaring enough, but the fact that Guns N’ Roses’ cover of  “Live and Let Die” was blaring over the factory’s loudspeakers at the same time took the irony to a whole ’nother level.

Now, a week later, Guns N’ Roses are commemorating the incident (and mocking Trump) by selling the aforementioned “Live N’ Let Die With COVID 45” t-shirt for $25 each. Better yet, 100-percent of the net proceeds are going to MusiCares, which has set up a COVID-19 relief fund to help workers in the music industry who have experienced financial hardship as a result of the pandemic.

Of course, the “45” in “COVID 45” refers to Trump’s political nickname as the 45th President of the United States. The Commander in Chief is not the only member of the White House to face the wrath of Guns N’ Roses lately. Axl Rose recently called Secretary of the Treasury Steve Mnuchin an “asshole” for stating, “This is a great time for people to explore America.” Mnuchin even responded, resulting in a further takedown from the GN’R singer.

The t-shirt is available in sizes ranging from small to 2XL and is on sale now at the official GN’R merch site. The shirts will ship beginning on June 10th.

Meanwhile, Guns N’ Roses recently called off their spring / summer European tour due to the pandemic. There’s been no announcement regarding the band’s North American tour, which is slated to kick off July 4th in Milwaukee.

Relive Trump’s “Live and Let Die” factory moment in the clip below.

I can think of no better metaphor for this presidency than Donald Trump not wearing a face mask to a face mask factory while the song “Live and Let Die” blares in the background. pic.twitter.com/mJzU1HW7HA