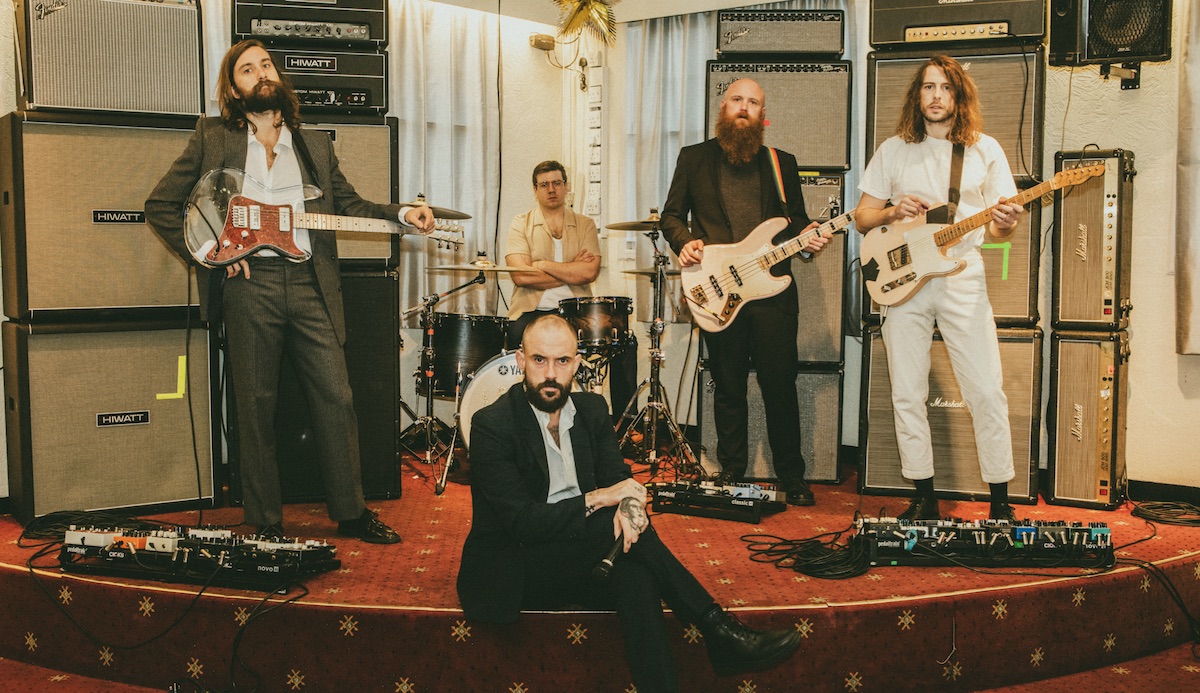 The Lowdown: In a year that’s seen the world burn physically, politically, and epidemiologically, getting into a debate about whether or not a rock band is phony feels as nostalgic as it does futile. However, this is an IDLES review, so that’s exactly what we’re going to do (at least for a minute). After the twin triumphs of 2017’s Brutalism and 2018’s Joy as an Act of Resistance vaulted the Bristol five-piece into the upper echelon of the British music world, the backlash arrived with bite that seemed to go beyond the music. Pick any IDLES profile from this album cycle, and you’ll inevitably see references to the recent charges and epithets leveled by fellow artists like Sleaford Mods (“their take on [political music] is cliched, patronising, insulting and mediocre”) and Fat White Family (“a bunch of self neutering middle class boobs”) and journalists like John Doran of The Quietus (“thirty-somethings pretending to be twenty-somethings acting like they’re representing teenagers while selling 180g tip on sleeve vinyl to forty-somethings”).

Warranted or not, other people’s preoccupation with political credibility seemed to overwhelm what made IDLES so alluring in the first place: the band’s brawny leftist politics, frontman Joe Talbot’s appealingly nontoxic masculinity, and raucous live shows that’ve earned a reputation for being some of the hardest-hitting in the business today. After absorbing flak for the last two years, Talbot is ready to give some back. On Ultra Mono, he’s added a new group to his list of targets. Now, in addition to misogynist lunkheads, pedigreed capitalists, and racist Brexiteers, Talbot’s taking aim at anyone who questions the sincerity of his oft-shouted convictions.

The Good: For anyone worried that the deluge of criticism and influx of resources might result in IDLES making some sort of stylistic overcorrection, there isn’t much time to fret. Opener “War” rolls in like a full tank battalion, bringing with it the circular-saw guitars and pounding cacophony that made the band post-hardcore hits to begin with. As usual, Talbot is at his most entertaining when he has a righteous target in his crosshairs; standout track “Model Village” is a devastating takedown of smug, scared Leave voters and the very British small-mindedness they embrace while “Carcinogenic” gives vicious voice to the slow-burning, ambient drain on mental and physical well-being associated with life in late capitalism.

While these sawed-off-at-a-shooting-gallery takedowns are satisfying, Talbot’s most interesting work on Ultra Mono continues his reckoning with grief, insecurity, and healing. While “Anxiety” builds to a frenzy that even Xanax couldn’t cure, the gray-skied “A Hymn” offers a more honest, impressionistic take on malaise than we’re used to seeing from IDLES. Taken in combination with the stellar closer “Danke” (which turns a Daniel Johnston quote into a frenzied self-care blood ritual), it offers a new dynamic that’s worth exploring.

Although most IDLES tracks live and die by the quality of Talbot’s street-preacher ravings, his bandmates have done their best to prove themselves indispensable. With the help of hip-hop producer Kenny Beats, drummer Jon Beavis and bassist Adam Devonshire discover an extra gear to the mad, pummeling engine at the heart of Ultra Mono. From drums that seethe with automated rage on “Kill Them with Kindness” to the shuddering fight-scene bass that propels “Reigns”, Beats leaves the band sounding sharper and more menacing than they did when he found them.

The Bad: So, about those haters. Despite shrugging off the impact of the naysayers to anyone who’ll listen, one listen to Ultra Mono makes it difficult to argue that Talbot isn’t at least a little bothered by some of the charges that’ve been leveled. A quarter of the tracks on the record are devoted to some variation on the theme of proving detractors wrong; they also happen to be the album’s weakest songs. Whether he’s getting defensive about his art on “Grounds”, exhausting himself to avoid cliches on “Mr. Motivator”, or pre-empting potential future criticism on “The Lover”, Talbot temporarily morphs into a singing, shouting version of that one Dril tweet. The material on Ultra Mono also takes a few ill-advised leans into some of critics’ legitimate complaints about the band; the admirable sentiment of “Ne Touch Pas Moi” is kneecapped by the nuance-free repetition of “consent!,” which is there just in case you needed Cliff’s Notes for a sub-three-minute punk song. This kind of shout-along sloganeering works way better in a packed and thrashing club than it does on the record, but it’s here anyway.

The Verdict: In a year more primed for principled shit-kicking political anthems than any in recent memory, the arrival of an IDLES record is undeniably cause for celebration. At its strongest, Ultra Mono offers a fresh set of urgent rallying cries for anyone interested in furthering workers’ rights, dismantling systemic racism, and knocking out a few Nazi teeth. The record’s missteps mostly come when Talbot finds himself on the defensive, a position that finds him turning out poison-pen responses to critics that probably felt better to sing than they do to hear. Maybe that’s the lesson here. After spending their third record preaching confidence in the face of adversity, all IDLES has to do is apply those same morals going forward. In other words: don’t talk about it. Be about it.