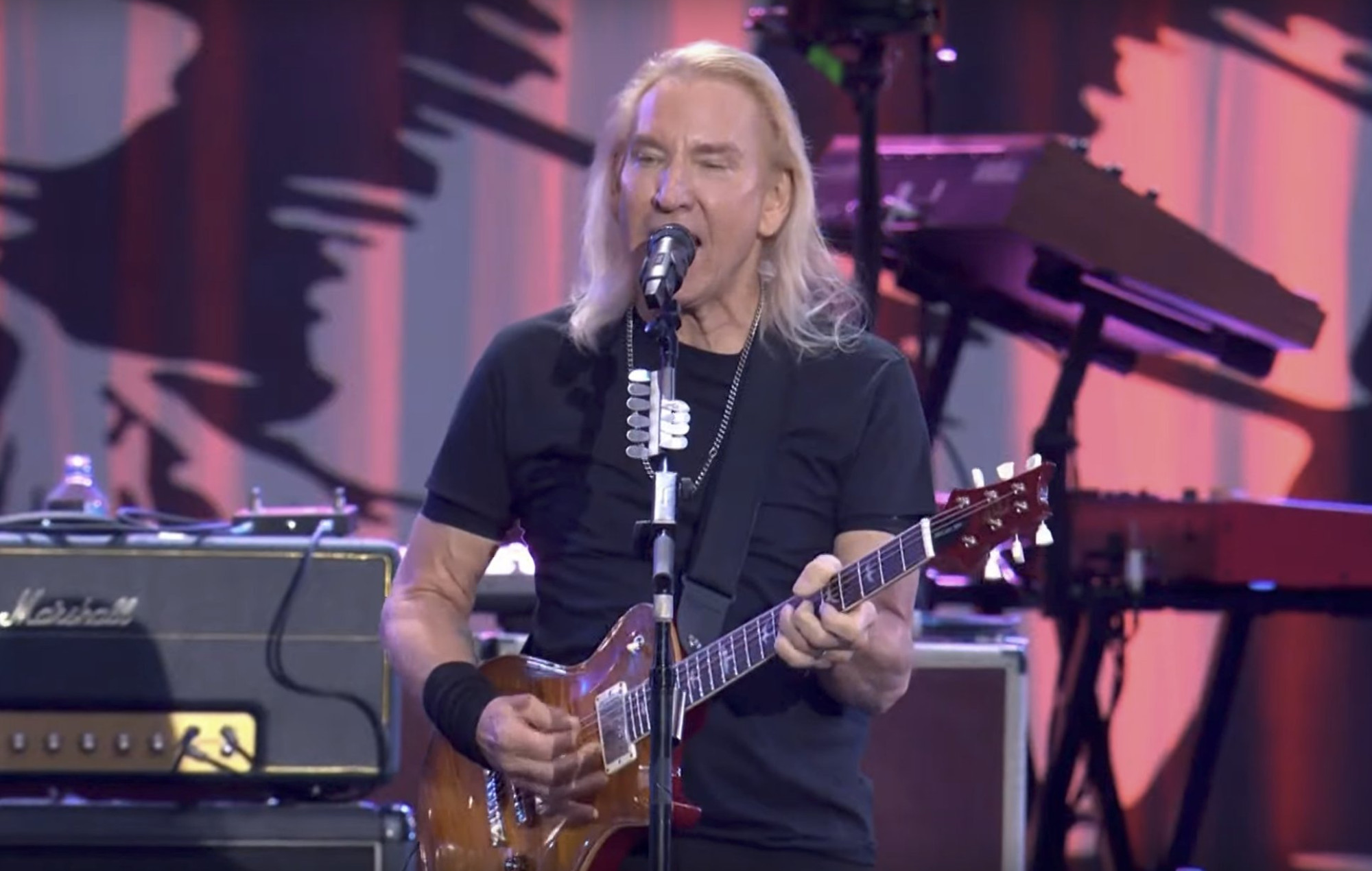 The special event in honour of the late Foo Fighters drummer took place on Saturday (September 3) at London’s Wembley Stadium, and was simulcast all on the web, television and streaming platforms.

Introducing James Gang, Foo Fighters’ Dave Grohl said: “If you’ve ever seen a picture of Taylor Hawkins, most likely he was wearing a fucking hat that said James Gang on it.”

Led by Walsh – who had tweeted about the band’s set at the concert the day prior (September 2) – James Gang stepped onto the stage at 7pm BST, where the trio gave a performance of ‘Walk Away’, from their 1971 album ‘Thirds’, before playing a medley of ‘The Bomber: Closet Queen/Bolero/Cast Your Fate to the Wind’.

The group – rounded out by bassist Dale Peters and drummer Jimmy Fox – ended their brief appearance with a rendition of 1970’s ‘Funk #49’, joined by Grohl on drums at Walsh’s invitation.

Their first gig since 2006, James Gang were met with praise on social media from viewers of the tribute concert.

For a bunch of dudes who haven’t played together for more than 15 years, the James Gang are sounding righteous and TIGHT

They may look like your granda’ but they know how to rock #taylorhawkinstribute pic.twitter.com/FYRbEThOK0

The James Gang reformed to play this benefit, and they sound great. T, I hope you’re listening and grinning like mad somewhere out there. #taylorhawkinstribute

Such an awesome thing for the James Gang to reform especially for Taylor Hawkins tribute concert.

They were one of his fave bands. Sad that he isn’t here to see them play #taylorhawkinstribute pic.twitter.com/ixJIFIrHqj

Man, these #JamesGang boys are in some fine fucking form

Ahead of the show, Walsh revealed in a statement (per Ultimate Classic Rock) that Hawkins had frequently asked him about his career. “Taylor was like my little brother who was always asking questions,” the veteran rocker said. “He had an insatiable curiosity about playing hard and loud like we used to do in the ’70s.

“We spoke a lot about being in a three-piece, how we recorded ‘James Gang Rides Again’ and what life was like for a musician before he was even born.

“He thought I was pretty cool and the feeling was mutual.”

Grohl and Hawkins’ Foo Fighters bandmates opened the event with a stirring speech that paid tribute to their late drummer. “No one else could make you smile, or laugh, or dance, or sing like he could,” Grohl said.

Later, Grohl’s 16-year-old daughter, Violet, covered two Jeff Buckley songs in tribute to Hawkins, backed by her father on drums, Queens Of The Stone Age and Them Crooked Vultures‘ Alain Johannes, guitarist Jason Falkner and Jane’s Addiction’s Chris Chaney. Violet performed ‘Last Goodbye’ and ‘Grace’, following an introduction by her father, who called her “the only person I know who can actually sing a Jeff Buckley song”.

Elsewhere in the show, Metallica’s Lars Ulrich and AC/DC’s Brian Johnson joined forces to perform a pair of the latter band’s hits – ‘Back In Black’ and ‘Let There Be Rock’ – following Violet’s return to cover The Zutons’ ‘Valerie’ with Ronson, The Living End’s Chris Cheney and Falkner.

Foo Fighters closed out the night with a star-studded set that featured a revolving cast of drummers, including Barker, Nandi Bushell, and 16-year-old Shane Hawkins. Paul McCartney also joined the group on stage, delivering a performance of two Beatles songs.

Queen’s Brian May and Roger Taylor also took to the stage alongside Foo Fighters to perform five songs – ‘We Will Rock You’, ‘I’m In Love With My Car’, ‘Under Pressure’, ‘Somebody To Love’ and an acoustic rendition of ‘Love Of My Life’.

Hawkins, who drummed with Foo Fighters from 1997 alongside performing in bands like Chevy Metal and Taylor Hawkins And The Coattail Riders, died in March 2022, aged 50.

Earlier this month it was announced that Grohl would be joining Walsh and James Gang as the “special guest” at Walsh’s veteran benefit show, ‘VetsAid’, on November 13 at the Nationwide Arena in Columbus, Ohio.

James Gang will headline the event, with their reunion being billed as “one last ride”. They’ll be joined on the line-up by Nine Inch Nails, The Black Keys and The Breeders.