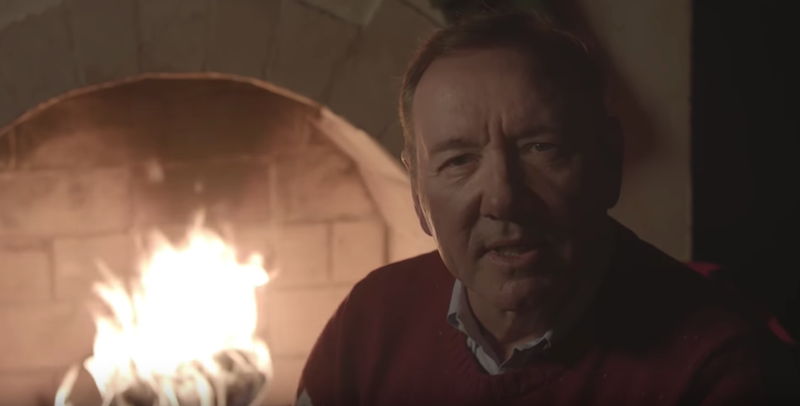 For the second year in a row, Kevin Spacey has uploaded a bizarre video to YouTube in a Christmas Eve-pegged attempt to stay relevant. In the clip, the disgraced actor slips into the voice of his House of Cards character Frank Underwood to claim it’s been “pretty good year”, saying that he’s “got his health back”, and reminding viewers that when attacked by someone, it’s always best to “kill them with kindness.” Watch the whole thing below.

The video, titled “KTWK” (an acronym for “kill them with kindness”), is barely a minute long and sees Spacey wearing a red holiday sweater while he pokes at a roaring fire. “You didn’t really think I was going to miss the opportunity to wish you a Merry Christmas, did you?” he says with the Frank Underwood rasp. He goes on to say he’s made “changes” to his life and wants to cast his vote in 2020 for “more good in this world”. “I know what you’re thinking, Can he be serious? I’m dead serious.”

When Spacey gets to the unsolicited advice portion of the video, the camera begins to zoom in on his face. “The next time someone does something you don’t like, you can go on the attack,” he says. “But you can also hold your fire and do the unexpected. You can… kill them with kindness.” Then the video ends with ominous music reminiscent of the dramatic chipmunk sound effect. Watch the video below.

Last year, Kevin Spacey uploaded a similarly weird-af video on Christmas Eve, also while pretending to be Frank Underwood from House of Cards, where he defended himself against the numerous sexual assault allegations he’s facing. In October, one of his accusers, a massage therapist, died of natural causes, so Spacey will dodge those criminal charges. In July, a separate civil suit against Spacey was dropped due to the “unavailability of the complaining witness,” an 18-year-old Massachusetts native, despite being formally charged with felony sexual assault. Meanwhile, he’s still being investigated by Scotland Yard for allegations claiming that Spacey sexually assaulted six different men in London between 1996 and 2013.

What has Spacey been up to over the past year instead of hiding in shame? He delivered a pizza to paparazzi while wearing a “Retired since 2017” hat, got pulled over by cops for speeding, hosted a pity party at the National Roman Museum where he recited poetry, and he took a Spanish street band’s guitar and began performing with them unprompted in Spain. You know, normal stuff.

If you want to waste time watching Spacey’s latest spotlight grab, find the video below.