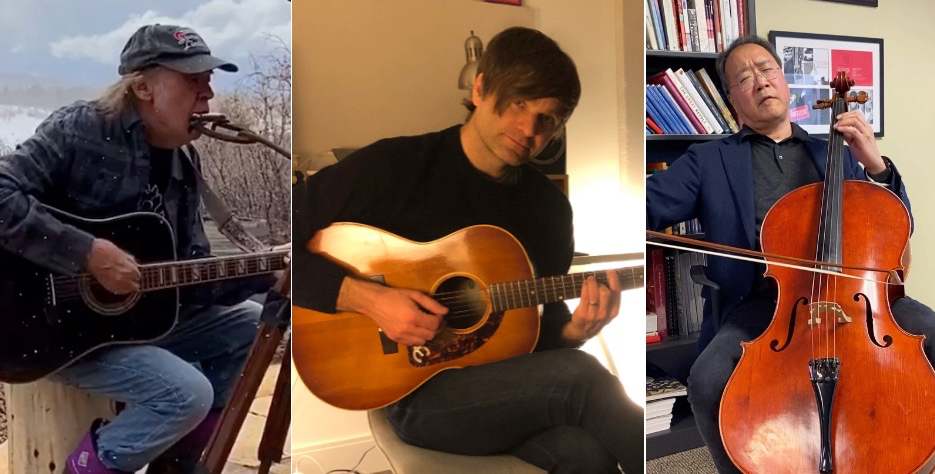 With all tours and events grounded because of the coronavirus, artists have been using livestreaming to stay close to their fans. Below, you’ll find an updated list of livestreams scheduled for the coming days and details on how to watch them. In particular, fans can catch Dave Matthews, Neil Young, Charli XCX, Miley Cyrus, Ben Gibbard, Rufus Wainwright, Peter Bjorn and John, Big Freedia, Christine and the Queens, Amanda Shires, and more.

Each afternoon, Charli XCX is joined by a special guest to “spark conversation, share insight, or simply entertain fans across the world who are currently practicing social distancing.” Her inaugural episodes featured a conversation with Christine and the Queens about mental health, and a personal training session with Diplo.

Christine and the Queens

Every day at 1:00 p.m. ET, the French artist also known as Héloïse Letissier performs live from Ferber recording studios in Paris. “I’ll find a way to deal with the ennui,” she writes. “Guests and weird concepts included.”

Viewers will see Third Man artists “sharing whatever is inspiring them during this impossibly dystopian moment in time. Let us commiserate with you, lift your spirits, and feed your soul with the magic that only ‘live’ music / poetry / puppet shows / some sort of human connection can provide.”

Third Man will be including Venmo and Paypal handles so that viewers can tip the entertainers.

La Blogothèque is offering a new spin on its beloved “Take Away Shows” with “Stay Away Shows”. As they explain it, “We want our entire community and all music lovers to have access to their favourite artists and discover new talents during the confinement period. That’s why we’re launching the ‘Stay Away Shows’. Every day, at 7pm Paris time, 2pm NYC time, 11am LA time, on our Instagram, friends from The Blogothèque will come and play a live show with a lot of surprises. Please, stay home, stay safe.”

Each weekday, Cyrus and a special guest discuss “how to stay LIT with love in dark times.” Early episodes have featured Demi Lovato and Amy Schumer.

Melissa Etheridge is performing live on Facebook everday on at 3:00 p.m. EST.

Tayla Parx’s “Together at Home”

Tayla Parx participates in an installment of “Together at Home”, a livestream series from Global Citizen and the World Health Organization that seeks to unify people and spur action during the coronavirus pandemic.

Brendan Benson’s “Boy in a Bubble”

The Raconteurs’ Brendan Benson has announced “Boy In A Bubble”, a daily series of livestreamed solo performances. Benson will perform one song per day, pulling from all points of his storied career and premiering material from his upcoming solo album Dear Life.

Amanda Shires’ “I So Lounging”

Amanda Shires has been staging daily live performances on YouTube with her husband Jason Isbell. Past performances have featured songs from her collaborative project The Highwomen and a cover of Warren Zevon.

Death Cab For Cutie frontman Ben Gibbard is performing daily concerts from his home studio. His initial performances have featured a mix of DCFC songs, material from The Postal Service, and covers of Radiohead and New Order. Future shows may include special guests.

Gibbard is also encouraging his fans to donate to organizations including Aurora Commons and the University District Food Bank.

Drew Holcomb is making the most of his time in self-quarantine by creating the “Kitchen Covers” series that streams every evening at 9:00 p.m. EST via Instagram and Facebook. So far, he’s covered songs by The Avett Brothers, Tom Petty, U2, and Kenny Rogers.

For the duration of social distancing/quarantine practices in the U.S., Diplo will livestream DJ sets from his house five nights per week. The streams will be themed in line with Diplo’s interests: “A Very Lazer Sunday”, paying homage to his group, Major Lazer’s, dancehall and reggae roots airing Sundays at 7:00 p.m. EST; a mixed-bag “Ronatronix” set Tuesdays at 10:00 p.m. EST (the name a throwback to the iconic Hollertronix parties that launched his career); country-flecked variety show “The Thomas Wesley Show Thursdays” at 10:00 p.m. EST; ambient “Corona Sabbath Fridays” at 10:00 p.m. EST; and a good, old fashioned “Coronight Feve”r rave Saturday nights at 11:00 p.m. EST.

Major publishers and record labels will allow the archived streams to live on YouTube and to be monetized by respective rights holders, with royalties being paid to all those whose music is played in the shows.

In a series he’s calling “Musical Everydays,” Rufus Wainwright is performing one song from his catalog everyday on piano. Early installments have seen him play “Grey Gardens”, “The Art Teacher”, and “Vibrate”.

“In these dire times, I want to share some music with you all from the warmth and comfort of our home in Los Angeles. Hopefully you’re at your homes with your loved ones as well. We have to stay positive and I feel that music and art are a large part of what gets us through times like these. It’s even more essential to be reminded about what it really means to be human: compassionate, caring, creative,” Wainwright says.

Phish’s “Dinner and a Movie”

Each Tuesday for the foreseeable future, Phish will air a full show for free from their LivePhish.com archive. Each broadcast will begin promptly at 8:30 p.m. EST.

Phish will also provide fans with recommended in-home recipes so they can cook along and enjoy dinner while watching the show.

Lastly, each show will provide fans with the opportunity to donate to a non-profit hand-picked by the band.

The FADER FORT Digital broadcast will feature over 40 exclusive, curated performances provided by both emerging and acclaimed artists. These artists join The FADER in this broadcast as an opportunity to raise money for various charities that focus on helping the city and people of Austin, as well as musicians and the entertainment industry on the whole during this global crisis.

An exact lineup for the livestream is forthcoming.

The idea of the digital tour is for Echosmith to perform acoustic shows on various Instagram accounts, Facebook pages, and/or websites so everyone can have some human connection and be brought together by music during these difficult times. The band will be performing songs from their new album Lonely Generation.

Ben Folds will take fan requests and play cover songs from his apartment in Sydney, Australia. “Request to your hearts desire during the live chat, and understand that there’s no science to it. When I notice one I can play, I’ll just launch into it!” he says.

On a semi-regular basis, Neil Young will host “Fireside Sessions” from his home in Telluride, Colorado. “Because we are all at home and not venturing out, we will try to do a stream from my fireplace with my lovely wife [Daryl Hannah] filming. It will be a down-home production, a few songs, a little time together,” explains the songwriting legend.

The initial episode featured a six-song set with performances of “Vampire Blues”, “Razor Love”, and “Tell Me Why”.

On a semi-regular basis, Yo-Yo Ma will perform live on Instagram. “In these days of anxiety, I wanted to find a way to continue to share some of the music that gives me comfort,” he says.