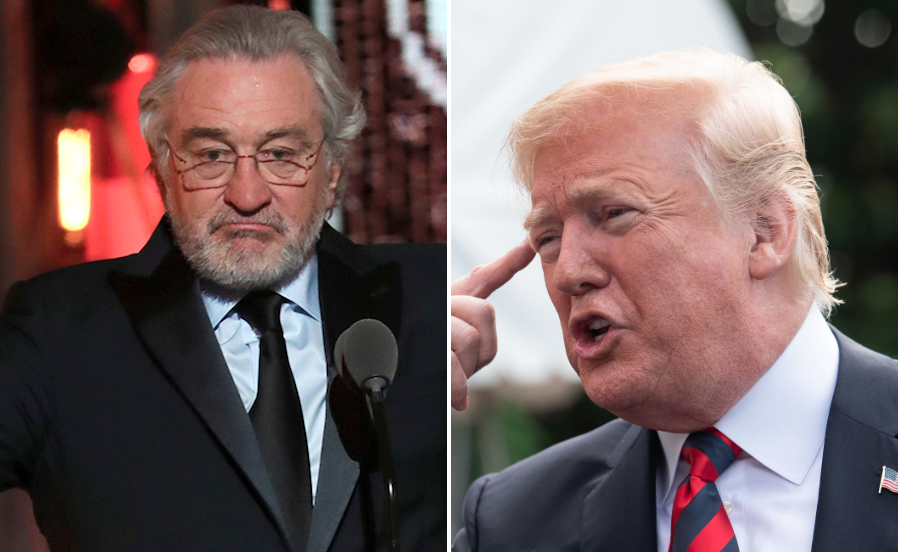 Robert De Niro doesn’t hide his feelings when it comes to Donald Trump, and now he doesn’t hide his dreams about the president either. During a recent appearance on podcast Rumble With Michael Moore, De Niro delivered a lengthy rant about Trump, at one point saying he’d like to hit him in the face with “a bag of shit”.

The hour-long episode happened to be De Niro’s first-ever podcast interview, which makes his use of the time on it all the more momentous. The Irishman star kicked things off by explaining how and why Trump needs to be humiliated on camera. By De Niro’s logic, being caught in a non-disputable embarrassing moment and put on public display would take Trump down a few notches. After all, if words and insults were enough to tear Trump down, then De Niro’s well-aimed f-bombs on cable news and awards shows would have done the job by now.

“I’d like to see a bag of shit right in his face — hit him right in the face like that and let the picture go all over the world. And that would be the most humiliating thing because he needs to be humiliated,” said De Niro. “He needs to be confronted and humiliated by whoever his opponent is, his political opponent. They have to stand up to him. They don’t have to do it in an obvious physical way, but they have to have the formidability to confront him and to put him in his place, because the people have to see that, to see him be humiliated.”

De Niro served up several other insults in the interview, too, but made sure not to drag others down in the process. “I always say ‘low life’ because he’s a low life. He’s not a pig,” said De Niro. “I used to call him a pig, but pigs have dignity. He has no dignity, no nothing. He’s a disgrace to the human race, if you will.”

In addition to getting impeached, Trump has been making all kinds of headlines lately. He tried to start an awkward #MAGAChallenge, he awarded Jon Voight for feeding his ego, and he actually thinks The Apprentice: White House is a good idea. No wonder De Niro wants to sling some poop his way.

EDC Las Vegas 2020 Lineup – Or Most Of It, At Least
Universal’s Donna Langley Promotes Peter Levinsohn To Vice Chairman & Chief Distribution Officer
Machine Gun Kelly and IG Model Sommer Ray Appear to Hook Up at Concert
Raf Simons Joins Prada as Co-Creative Director
How to Use Witch Hazel in Your Beauty Routine