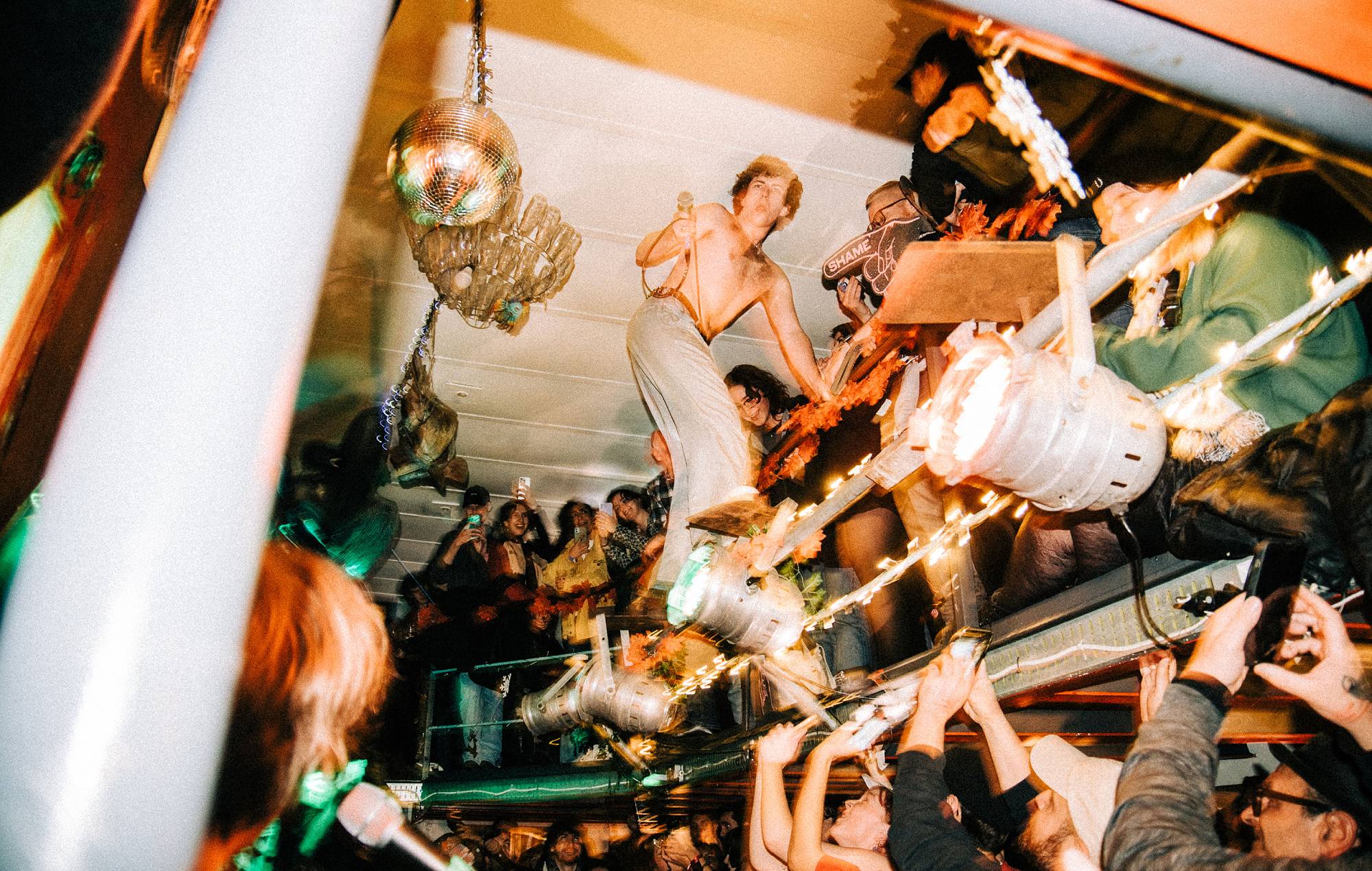 Last night (November 28), Shame debuted tracks from their upcoming third album ‘Food For Worms’ during a raucous and sweaty gig aboard a boat on the River Thames. See footage and the setlist below.

As announced this month, the band’s new album will land on February 24, 2023 via Dead Oceans as the follow-up to 2021’s ‘Drunk Tank Pink’. The record has been described as “a celebration of life” and “an ode to friendship”, with frontman Charlie Steen labelling it as “the Lamborghini of Shame records”.

Aboard the Tamesis Dock in Vauxhall, the band shared previewed a number of new tracks as well as favourites from their previous two albums. They opened the set with ‘The Fall Of Paul’, a new song that packed all the trademark relentless punch of Shame but with a new, anthemic element.

This more melodic, expansive sound was also evident on recent comeback single ‘Fingers Of Steel’, as well as new cuts in the form of the slow and triumphant new ‘Adderall’ and set highlight ‘Yankees’ – which exploded into a huge chorus that swapped the band’s usual shouted vocal for melodic singing. The punk backbone of the band still shone though, most notably on new one ‘Six-Pack’, which was led by a wailing guitar riff and raucous energy.

Frontman Charlie Steen told the crowd that the band wrote ‘Food For Worms’ in a lightning fast burst at the start of this year, when their management noticed the writers’ block they had been experiencing across 2021 and set them a challenge where they would play a set of all-new music at the Brixton Windmill in a fortnight (under the pseudonym Almost Seamus). Forced to write quickly and without inhibition, the songs that make up the new album flowed easily after a while.

Back on the crammed vessel on London’s South Bank, Steen spent half the set climbing up the balcony, into the crowd, and causing all manner of chaos. While new songs from ‘Food For Worms’ formed the crux of the set, the likes of ‘Tasteless’, ‘Alphabet’ and ‘Dust On Trial’ were reminders of the band’s brilliance and perfect for this sweaty and claustrophobic environment.

“I don’t think we’ve played in London for a very long time, and it feels very nice to be back with friends and family,” Steen told the crowd before a crazed rendition of early single ‘Concrete’. By the time they closed the set with debut single ‘One Rizla’, ‘Drunk Tank Pink’ highlight ‘Snow Day’ and the seedy ‘Gold Hole’, the windows of the boat were steamed up and sweat was dripping from the ceiling. They’re dye play Brixton Academy next year, but this was Shame in their ideal setting: intimate, loud and chaotic.

In addition to the news of the album, Shame have announced their biggest-ever European headline tour, starting in Dublin on March 1, 2023 and finishing up at London’s Brixton Academy on April 28. See full dates below and buy tickets here.