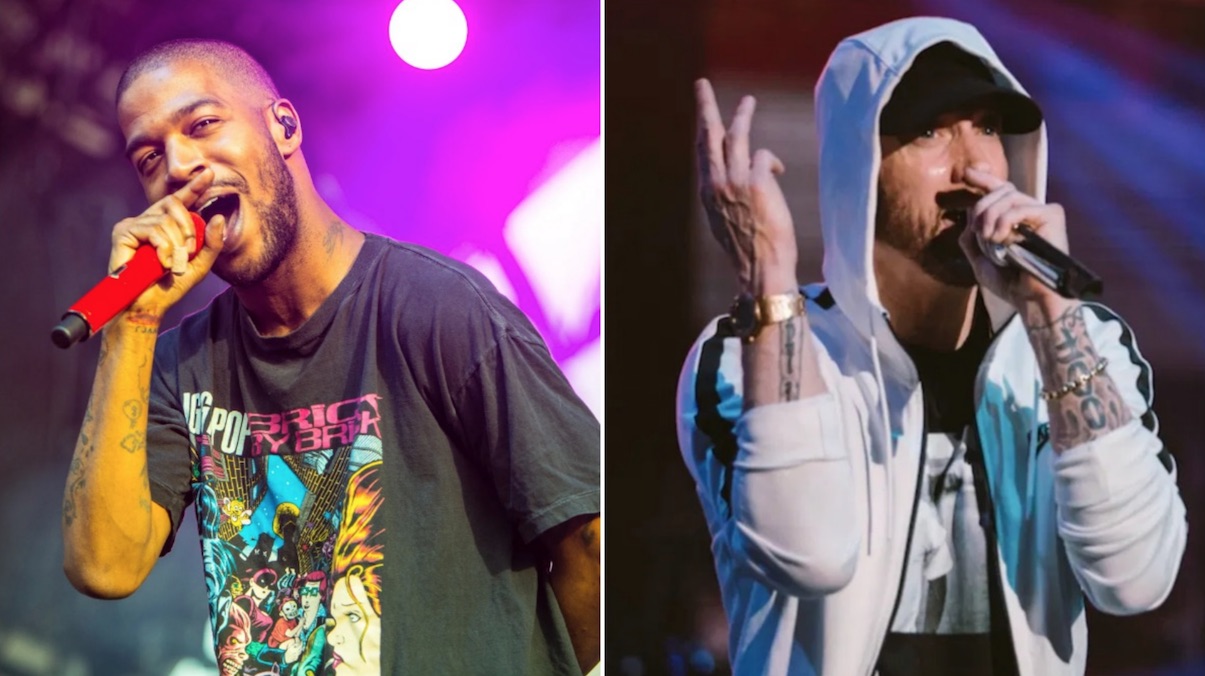 Song of the Week breaks down and talks about the song we just can’t get out of our head each week. Find these songs and more on our Spotify New Sounds playlist.

Music hasn’t pussyfooted around in 2020. Nor has it turned a blind eye to what’s going on in the world. More and more, artists are tackling the topics we see in our daily media feeds and on our nightly news programs, and they’re getting music into the hands — or at least ears — of listeners faster than ever. And that trend makes sense. In a time where artists reveal more about themselves than ever via social media platforms and the world never sits still for longer than a news cycle, listeners are not only demanding that songs address their needs — something to march to, dance to, or lean on — but that they do so in as close to real time as possible.

The message has become loud and clear: be relevant, be real, or go home.

This week, Kid Cudi and guest Eminem added their veteran voices to that call for musical urgency. Paired for the first time on mic — Eminem did produce a Cudi collab with Lil B back in 2010 — the two adopt their old Moon Man and Slim Shady alter egos, respectively, for an adventure that feels too hot to have been given much time to cool. Driven by the eerie beats of Cudi’s WZRD cohort, Dot da Genius, Rager delves deep by looking back on the pains of addiction (“Years ago, rehab/ All good, helped me figure out another plan/ It got bad, so bad”) and his deliverance from those demons (“Ya’ll ain’t dealing with the same boy”). It’s the authenticity that Cudi has become known for, not ashamed to admit how he used to self-medicate his depression with hard drugs. Dot’s backing allows Cudi to pause in reflection but never come to a full stop, creating a momentum where principle and purpose feel more important than perfection.

Eminem enters the second verse in full-on “Rap God” mode, running through his credentials and proclaiming his sobriety (“But the only ones [trees] I smoke are the loose leaf”) before hinting at being an avid Last Dance watcher (“Now, if rap was b-ball/ I’d be Jordan-like”). Still, while Shady makes his case for being rap’s own “GOAT,” what stands out is how he grounds his half of this joint adventure in the social shakeup of the times. With a rocker-step cadence, he calls out ignorant comments from Drew Brees, pays tribute to George Floyd and Ahmaud Arbery by name, criticizes those not taking COVID-19 seriously (“Don’t wanna wear a mask, and they’re just scoffing/ And that’s how you end up catching the shit off ’em”), and concludes by playing the role of victim to a rogue cop (“Stop, man, please, Officer, I’m sorry/ But I can’t breathe when I got you on top of me/ Your goddamn knee’s on my carotid artery”).

It’s a collaboration with roots in a Tweet (Cudi tweeted to Eminem, “rap God. Help!” in early May), the ominous sounds of the time, and heightened levels of both self-reflection and social awareness. In times that demand brutal honesty and voices with a platform to speak up, Moon Man and Slim Shady take listeners on the type of adventure they’re clamoring for.

For a high-definition listening experience, you can sign up for a 60-day free trial of TIDAL HiFi.

Check out and subscribe to our Spotify New Sounds Playlist.