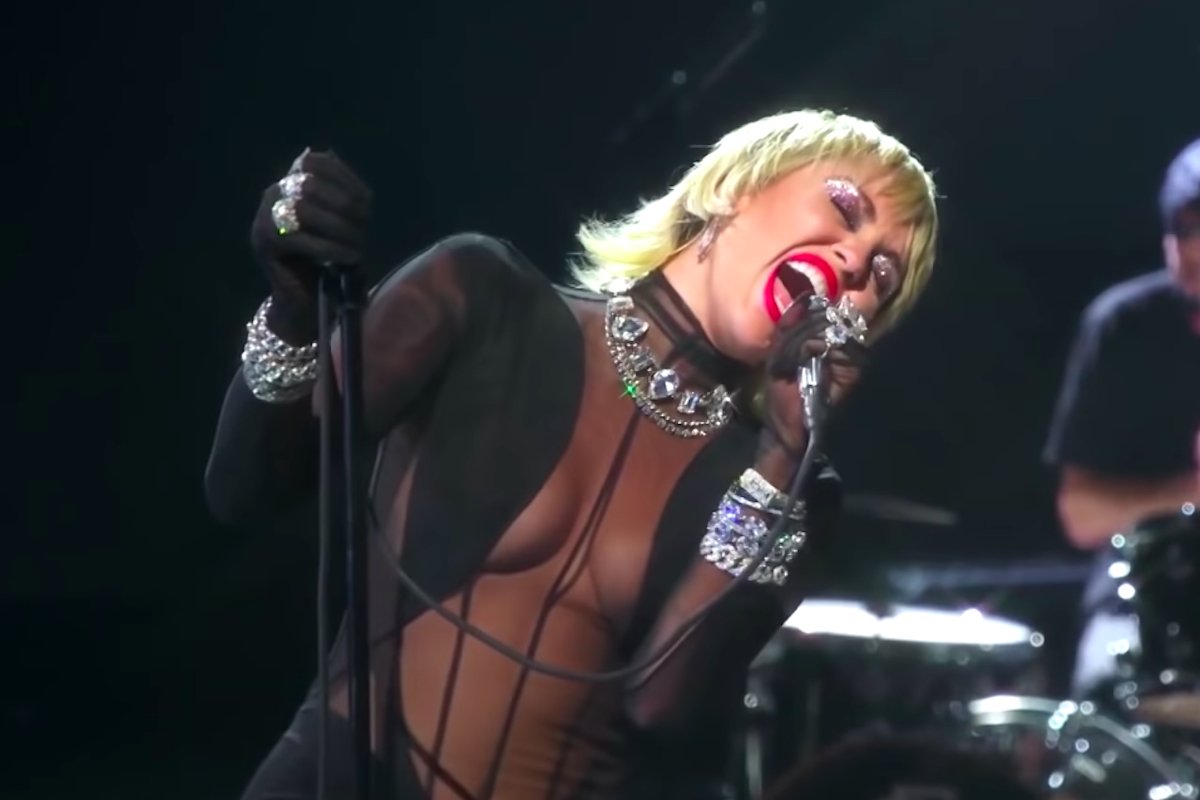 At the 2019 iHeart Radio music festival, Miley Cyrus had some surprising words about her biggest hits. After ploughing through “We Can’t Stop” and “Slide Away”, she took a moment to level with the audience. “You know, I sing songs like ‘Can’t Stop’ for you,” she said with a smile. “But then, I sing a couple songs for me.” She then launched clear into outer space for a cover of Pink Floyd’s “Comfortably Numb”. The message was clear: The favored child of a country superstar, groomed from a young age to be the perfect pop princess, had grown disenchanted with some of her old music.

It had happened before. She tried to leave her Hannah Montana days behind her with 2010’s Can’t Be Tamed. As she transitioned away from her squeaky-clean image, she found herself hounded by pearl-clutching parents and professional media scolds — people apparently scandalized at the very thought of a 17-year-old having sex. In response, she introduced a lot more songs by Joan Jett into her sets, using Jett and her band The Runaways to help channel her frustrations and independence.

After a turbulent tour, she took some time off and returned to acting. She seemed to rediscover her fondness for music, covering classic songs at the 2012 Backyard Sessions. Cyrus shined like never before, and her renditions of “Jolene” and “Lilac Wine” remain some of the finest performances of her career. These covers were an important step on Cyrus’ journey to finding her own voice.

She rebounded to pop music with Bangerz in 2013, and while she achieved her greatest commercial success to date, she was already hard at work on one of the most remarkable albums by a young superstar in the history of modern music.

2015’s Miley Cyrus and Her Dead Petz is a bizarre piece of pop psychedelia, influenced by hip-hop and rock and roll, and made in collaboration with The Flaming Lips. It’s bracingly personal, strikingly experimental, far too horny for its own good — and at 90 minutes, excruciatingly tedious. But working with Wayne Coyne and the Lips had a profound effect on her approach to music. She said at the time, “On my last record, everything we did was with computers. But they’re real musicians – they can change keys on a whim. I’ve never seen anything like it. They’ve had me on this journey that’s greater than anything I’ve been on.”

It took her a few more wandering years to return to rock and roll, and in the subsequent half-decade she released the forgettable Younger Now and promising but uneven She Is Coming EP. Her voice changed — a result of more experience, more skill, a shit-ton of pot, an unfortunate vocal cord surgery, and eventually, sobriety. Her covers during this period start to change, too. She became less faithful to the original, more willing to rearrange a song’s furniture and slap on a new coat of paint.

Now, Miley Cyrus has tried just about everything. She’s roamed farther afield than most of her peers, and, in the process, risked failure and personal humiliation. At the age of 27, she’s reaping the rewards.

The singer emerged in 2020 with a Joan Jett mullet and “Midnight Sky”. Cyrus has brought back glam rock, and she’s done it with a practiced eye for fashion and a scorching vocal instrument. Already this year she’s delivered two of the great performances of the quarantine: a brand-new Backyard Session for MTV Unplugged, and her powerhouse set for #SOSFest. Both leaned heavily on rock and roll standards. She knows she’s good at this heavy shit, too. She’s working on a Metallica covers record, and she said her new album, Plastic Hearts, was inspired by Britney Spears and Metallica.

In celebration of Cyrus’ rock ascendency, we’ve assembled a list of her 10 greatest rock and roll covers. They span her whole career, though there’s a bias towards her later, mature performances. Listening to these songs, it’s easy to wish she would hit the road, perhaps with a band like the Stone Temple Pilots. That would be almost guaranteed to satisfy. But fans are probably happier to just follow Cyrus wherever she chooses to wander. It hasn’t been boring yet.