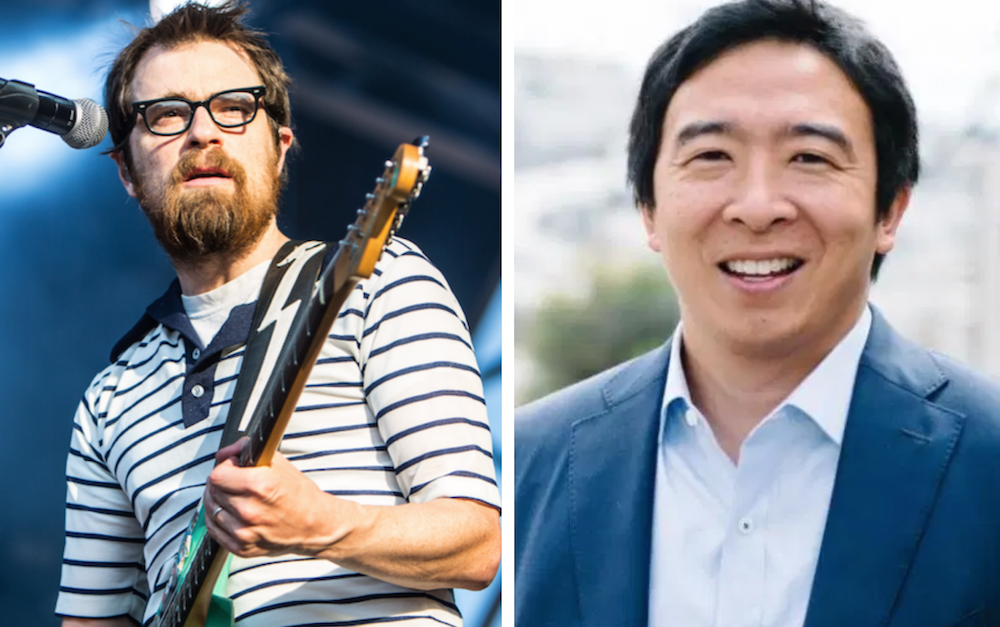 The band is scheduled to perform at one of Yang’s presidential rallies this Friday, November 1st. Officially dubbed Yangapalooza, the event takes place at the Brenton Skating Park in Des Moines, Iowa.

(Read: The 10 Touring Artists Who Shaped the Decade in Music)

Frontman Rivers Cuomo is said to be one of Yang’s early supporters and reportedly donated to his campaign in the beginning of 2019. “Thank you @RiversCuomo – you’re a true visionary. Honored to have your support for my campaign. Look forward to seeing you on tour!” Yang tweeted in January.

“Ex-goth” Yang had expressed his Weezer fandom even before Cuomo’s financial pledge, though. In October 2018, the presidential candidate tweeted, “This Weezer remake of ‘Africa’ makes me think they should remake all of the best songs from the 80s. I’d buy that.” This led Redditors to joke that Yang “willed” Weezer’s Teal covers album “into existence.”

Other celebrities to endorse the attorney/entrepreneur include Nicolas Cage and Netflix star Noah Centineo.

Weezer’s rally appearance comes ahead of their larger “Hella Mega Tour” with Fall Out Boy and Green Day, tickets for which can be purchased here. The rock outfit is also expected to release a new album, Van Weezer, next spring.

Thank you @RiversCuomo – you’re a true visionary. Honored to have your support for my campaign. Look forward to seeing you on tour! 👍😀🇺🇸

I will put our celebrity donor list of Nicolas Cage, Rivers Cuomo, Noah Centineo and Sam Altman up against anyone’s. 😀

Revisit Van Weezer single “The End of the Game”: